I’m Somesh Dhandapani from India, and I came to Glasgow to study Sustainable Energy.

Access to reliable electricity is something that’s possible to be taken for granted in the UK. For millions of families across the globe, however, it’s not so easy. A lack of energy resources or unaffordable energy costs can mean being left in the dark.

“Some parts of India still suffer from frequent energy blackouts, with six to seven hours per day being lost to electric cuts. It can be a struggle to manage the demand, and priority is given to major cities.

I realised there was a big issue with students getting access to electricity while I was studying for my first degree at the Vellore Institute of Technology (VIT). I was working for the organisations MAD (Make a Difference), and Edforall (Education for All). I would go to government schools in rural areas to teach students basic maths, English and science. Many of the people I taught were forced to go to public halls or temples to get enough light to do their homework.

Edforall specialises in orphanage schools. While I was working for them, I met a child whose house didn’t have electricity or basic amenities. I thought that rather than offering teaching, I should help by focusing my effort on the energy side [of things]. 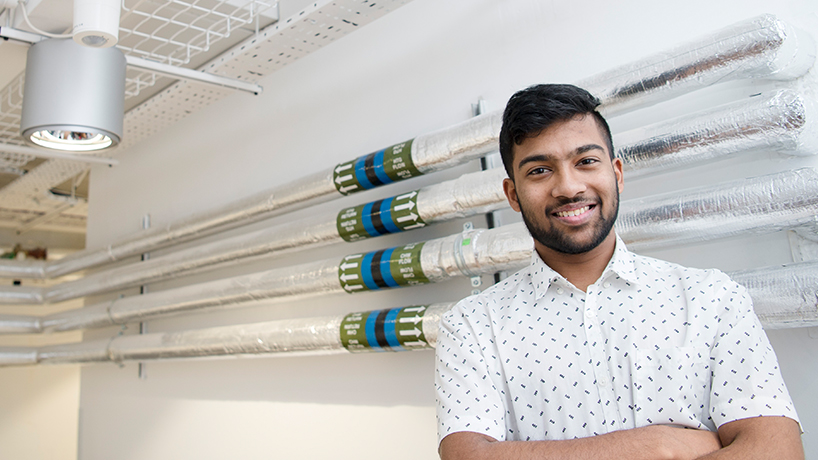 The world is power hungry and we need a lot of energy. It’s preferable to not exploit just one source of energy but rather have a broad range of sources to satisfy our needs.

To solve the energy issues faced by some rural populations in India, the best options are solar and wind renewable technologies. It’s sunny in India, and when the hot air rises up from the ground and the cold air comes down, a strong wind current is generated. During the day we have temperatures of about 45 degree centigrade in summer, so solar is also a good option.

The main reason I came to Scotland is because it’s world-leading in wind harvesting energy systems and is geographically well placed for tidal and hydro electricity. Glasgow was the only university I applied to that had biological electives available on the programme. The University of Glasgow also has a strong output of research published in well-respected journals, which really impressed me.

One thing I’ll take back from Scotland is the way that people are still connected to their history. Glasgow has named buildings after experts connected to the University such as James Watt and Lord Kelvin. They’re an inspiration to me.”

Somesh is a University of Glasgow graduate and is part of our community of Future World Changers, who have ambitions to improve lives across the globe. Follow the stories of our current world-changing students as they work to build a better and more sustainable future by using #UofGFWC.