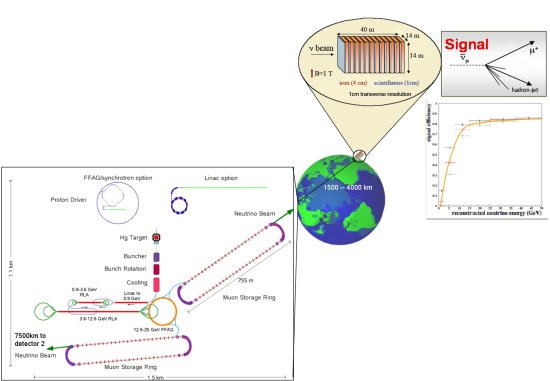 The Group has extensive experience in neutrino physics and has carried out neutrino factory R&D research since 1999. We are members of the UK Neutrino Factory collaboration, and are one of the original proponents of the HARP experiment (including the simulations that determined the experimental layout that resulted in the approval of the experiment by the SPSC).  We are also a founding member of the International Muon Ionization Cooling Experiment (MICE).

HARP had a successful data taking run and is in the process of analysing and publishing its physics results. These include the publication of results on aluminium and beryllium targets, relevant for the K2K and MiniBooNE neutrino oscillation experiments. Further work in HARP includes the large angle analysis on a variety of different targets that could potentially be suitable at a neutrino factory. Further work by Glasgow staff and students include the detailed comparisons of the experimental results with a number of hadronic simulator codes (such as GEANT4 and MARS) to determine the optimal energy for the proton driver at a neutrino factory and to bechmark the hadronic simulation software.

MICE is an experiment that will run at the Rutherford Appleton Laboratory (RAL) to demonstrate muon ionisation cooling, needed to reduce the emittance of the muon beams for a neutrino factory and muon collider. Work carried out by Glasgow staff and students consists on designing the MICE muon beamline for three different emittances and three momenta (nine configurations) derived from the ISIS accelerator using a GEANT4 simulation. The beamline design is essential to ensure that the number of muons delivered to  MICE is sufficient to measure ionisation cooling with the desired accuracy. Glasgow provided instrumentation, detectors and the analysis that was used to measure the particle yields from the target that dips into the ISIS accelerator. This is used to determine the particle composition of the beam and to compare it with simulations.

Glasgow staff have carried out a GEANT4 study of the pion yields from protons impinging on a tantalum target, one of the materials under consideration at a neutrino factory, and compared it to a MARS simulation. The main significance of this work was to highlight the uncertainties in the pion yield models from GEANT4 and MARS and to determine that the momentum that maximises the muon yield at a neutrino factory is between 5 and 15 GeV/c, with 10 GeV/c being used as the baseline proton driver energy for future design studies.

Glasgow staff have taken on a leading role in the Detector group of the International Scoping Study (ISS) for Neutrino Factories and Superbeams, and are working towards the International Design Study of a Neutrino Factory. Glasgow staff are leading the efforts to define the detectors needed to measure the so called “golden” channel at the neutrino factory (the wrong-sign muon appearance channel), by comparing the performance of a Magnetic Iron Neutrino Detector (MIND) with a Totally Active Scintillating Detector (TASD). Additionally, Glasgow staff are defining the design of a near detector needed to determine the neutrino factory neutrino flux and for measuring backgrounds to the “golden” channel. A silicon vertex detector in the near detector would be able to measure the charm background for the golden channel to the required level of accuracy. One Glasgow staff member is the leader of the Detector Workpackage at the EuroNu Design Study for a Future Neutrino Facility in Europe, recently funded by the European Union for €4.0 M.