The Heritage of Particle Physics in Glasgow

The Heritage of Particle Physics in Glasgow 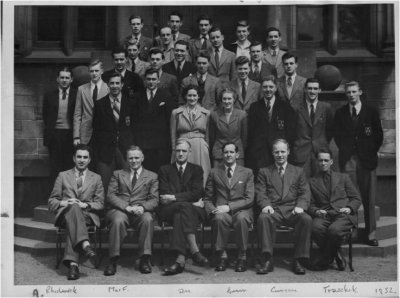 In the 1950’s the main thrust of departmental research was in nuclear and particle physics. Experimental groups were distinguished primarily by the particle detection technique used, thus there was a cloud chamber, nuclear emulsion and counter group. The establishment of the department on the world scene and the first operation of the electron synchrotron were marked in 1954 by the ‘Rochester Conference’.

John Gunn was Cargill Professor in charge of the theory section and the HoD (Regius Professor) was Philip Dee. Dee was one of Rutherford’s bright young men, who distinguished himself in the development of radar during WWII (one of the reasons for the relatively high political standing of physics in the following three decades) before coming to Glasgow. He delighted in describing the excitement at the Cavendish on the discovery of the neutron in 1932, giving us a first hand link to the origins of nuclear and particle physics. He also regaled us with stories of his first experience as a Ph.D. student there, when he was shown into an empty lab. and essentially told to "get on with some research". His high quality alpha particle studies using the cloud chamber required him to find a suitable high voltage clearing field to remove residual ions. This he achieved by cycling round the neighbourhood, collecting lead acid accumulators which were being discarded. This indicates that the lack of adequate funds for experimental programmes is by no means a new phenomenon! Further proof of the same was provided in the immediate aftermath of the ceasefire at the end of WWII, when Jimmy Atkinson (later director at Dounreay) hired a lorry and visited large numbers of military bases around the country, collecting electronic equipment which was to prove invaluable for the research in the Department. In fact, many of the units (heavy 240 DC supplies, E.H.T. units, potential dividers, scalers etc.) continued to be used, latterly in the Honours Class laboratory, until well into the 1970’s! 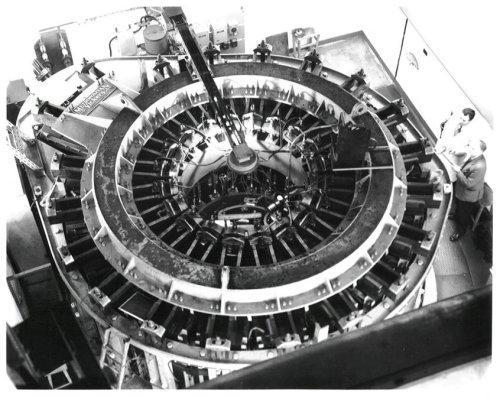 Under Dee, Glasgow became the proud host to a cutting-edge 300 MeV electron synchrotron, located in the basement of the custom built Basil Spence Natural Philosophy building. (Bruno Touschek, who is known as the father of collider accelerators, was an early research student under Dee at the beginning of this era.) There were perhaps not more than ten academic staff engaged in the construction and exploitation of this (commercially manufactured) machine for photoproduction studies up to the first nucleon resonance, (Gething Lewis, John Rutherglen, Ted Bellamy, Bill Williams, Phil March, Arthur Cockroft, Derek Stewart, Dennis Dixon, Jimmy Atkinson and Walter McFarlane).

There were the usual teething troubles in commissioning the machine, of course, so that it only reached its highest level of productivity in the early sixties, after my arrival as a (non-particle physics) Ph.D. student in 1960. Many of the postgraduates students of that era, (e.g. David Leith, Erwin Gabathuler, Ewan Paterson, Jimmy Walker, Jim Prentice), went on to highly successful careers in experimental particle physics, often as part of the "brain drain" to the U.S.A. that was a major concern at the time. One notable reversal of this trend was when Ian Hughes returned from Duke University to set up the Glasgow bubble chamber group. Postgraduate students in those days were expected to get their hands pretty dirty, generally, helping to construct detectors (cloud and bubble chambers, scintillation counters, liquid hydrogen targets for example), and even to participate in the operation of the Glasgow accelerator. Although apparatus was less sophisticated then, it is worth commenting that the annual Departmental equipment budget, supplied under the "Dual Support" model from University and DSIR/SERC/PPARC (now STFC), was probably not much different numerically from what is allocated currently! 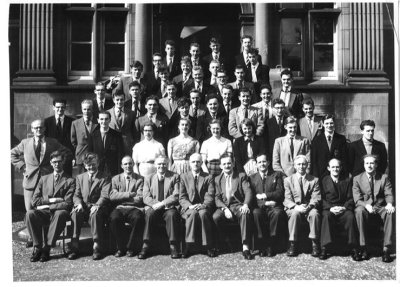 Departmental life in the sixties included many social activities, including physical contests between staff and students extending to football, cricket, badminton, squash, snooker, even rugby and especially golf. More intellectual pursuits were the annual chess and bridge matches. One which is now regrettably missing was the annual party organized by the undergraduate Physical Society. At this event each group, undergraduates, postgraduates and academic staff was expected to provide a "skit". We have particularly memorable recordings of past professors imitating the Beatles and performing a "pas de trois" dressed in tutus!

Progress in particle physics in the sixties clearly required migration to higher energies, leading to participation in bubble chamber experiments (including the discovery of the Omega-minus and other SU3-related particles, in collaboration with Oxford, Bristol, Birmingham, Imperial etc.). Complementary counter experiments were carried out at the new 4GeV electron synchrotron NINA at Daresbury. While the latter had difficulties in competing with earlier, higher energy machines at DESY and CEA (Harvard), there were some notable successes, (e.g. in measuring the photon-proton total cross-section, using tagged photons, and in polarised beam-polarised target experiments in the later years). When the decision had to be taken on converting NINA to collider operation or upgrading the energy to 12-14 GeV, the latter proposal was favoured by the community, (thereby, perhaps, losing the opportunity for the U.K. to discover the J/psi), but not by the funding agency! Yet again funding crises dictated that the U.K. should move away from providing stand-alone accelerator facilities and become good Europeans by exploiting more fully our investment in CERN. So it came about that I, together with Paul Booth, joined the RAL/Oxford group led by John Thresher, in one of the earlier UK experiments at the South Hall of the PS, where I was able to enjoy watching man’s first lunar steps on TV during a night shift. 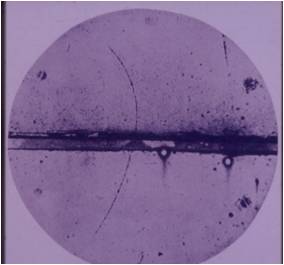 While the bubble chamber group at Glasgow had assembled an impressive amount of infrastructure for scanning and measuring bubble chamber film, in the early years many of the postgraduate students (e.g. Peter Negus) went on a twentieth century version of the Grand Tour, complete with large boxes of punched cards containing the measurement results, in a search for available (and affordable) computing resources (e.g. at Imperial College and at the Darmstadt computing centre). Eventually, a large IBM mainframe was purchased for installation in the Department, providing us with computing facilities that competed favourably with anything else available in the U.K., (a situation maintained today with our Grid-related developments). The bubble chamber group participated in many successful collaborations with Birmingham, Oxford, Imperial etc., including the discovery of the Omega-minus and other meson and baryon resonances within the SU3 classification scheme, as well as hunting for glueballs and other more exotic particles. 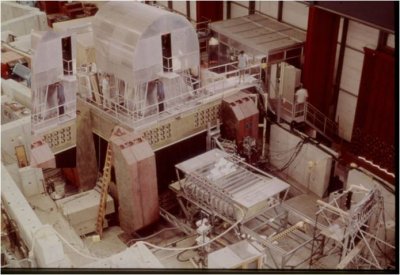 It became clear, however, that a move was needed into counter-based experimentation, which could supply more statistically significant event samples, and we embarked on a programme based on the Omega multi-particle spectrometer at CERN, led by Bert Turnbull, searching for baryon-antibaryon resonances and other, more exotic possibilities like glueballs. The tagged photon beam into the Omega spectrometer, led by John Rutherglen up to his tragic death in a road accident, was engaged in searches for photoproduced charm, and was the forerunner of the successful, ongoing programme of our Nuclear Structure Group, using such beams. 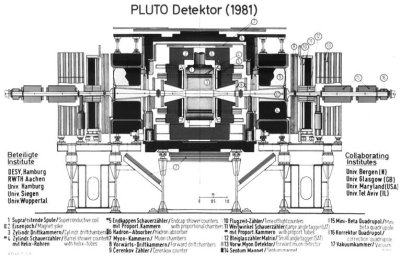 In pursuit of the Glasgow interest in electron-photon physics, a second activity, based on the DESY lab. streamer chamber electroproduction programme was initiated by Ian Skillicorn. This was followed by participation in electron positron collider physics at DORIS and PETRA within the PLUTO (photon-photon scattering) and latterly CELLO collaborations (in competition with DHS and TASSO!).

The natural progression from there was to LEP and the ALEPH collaboration, where the group, led by Ken Smith during LEP I and Bert Turnbull and Jim Lynch for LEP II, contributed to the construction of the endcap electromagnetic calorimeter modules, the laser calibration system for the TPC and the silicon vertex detector. The group spent many exciting and productive years tying down the Z0 parameters, searching for (and finding?) evidence of the Higgs up to 114 GeV and tying down the W mass at LEPII. 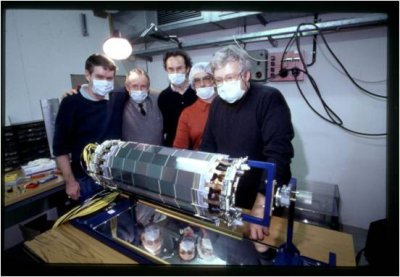 Ian Hughes’s retiral near the beginning of this period opened up a vacancy for a highly intelligent, capable, dynamic but diplomatic leader of the experimental particle physics group. David Saxon has been extremely active and successful in this growth process, and in raising the group and Departmental global profile, through hosting the ICHEP ’94 and other international conferences and initiating the annual Higgs-Clerk-Maxwell meetings at the Royal Society of Edinburgh. Since 1990, the particle physics group has expanded hugely in terms of support staff, postdocs and postgraduate students, whilst maintaining academic numbers. When appointed Head of Department, he formed an excellent working relationship with the Dean, Geoff Webb, and obviously learned a lot from him, taking over the role of Dean when Geoff retired. He has been a leading figure in the governing committees which oversee experimental particle physics in the U.K. at CERN and worldwide, and his wisdom and political nous was widely recognized in the UK, not least by the award of the OBE for his extensive contributions to science, as well as in the breadth of the range of his contributions to Glasgow University management. 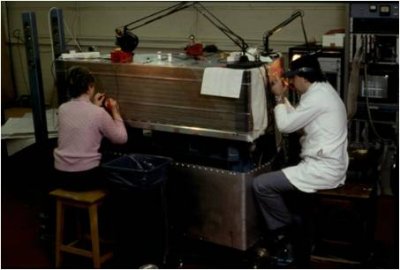 We continue to participate actively in the kind of detector development activity which has gone on here since the early days of cloud and bubble chambers, scintillation and semiconductor counter developments, nuclear emulsions, streamer and proportional chambers, and, as technology has become more sophisticated, in ever closer co-operation with our colleagues in the Department of Electrical and Electronic Engineering.  As co-founders of the international MEDIPIX Collaboration, we have contributed to the development of pixellated silicon detectors, initially with medical imaging in mind, but now finding ever wider applications, for example in electron microscopy, commercial materials analysis instruments and adaptive optics for astronomy, as well as for 'homeland security' and radiation dosimetry for astronauts. In particular, Keith Mathieson has recently led an innovative spin-off project to develop HEP-related pixel detector technology for imaging the electrical signals from retinal slices using microelectrode arrays, in a collaboration with UCSC and the Salk Institute, aiming ultimately at understanding retinal function and perhaps creating retinal prostheses. Recently MEDIPIX detectors have returned to a high energy particle physics application as monitors of the radiation background in ATLAS and CMS. The Detector Development Group, now led by Val O’Shea, continues to be active in preparing for LHC upgrades as well as pursuing cross-boundary applications of the technology expertise within the group.

Among the most impressive 'sea-changes' in Glasgow recently have been the Grid-related computing activity led by Tony Doyle, designed to meet the huge challenge of handling the massive data flow rate from the Large Hadron Collider (LHC), and the initiation of the SUPA consortium.

David Saxon retired on 11th August 2008 and was succeeded as Group Leader by Tony Doyle in April 2008. We are proud of our heritage and continue to innovate, whilst recognising that we are standing on the shoulders of giants as we explore ever more deeply into the fundamental constituents of matter.