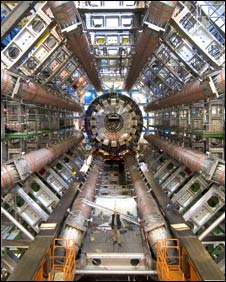 ATLAS is a particle physics experiment that will explore the fundamental nature of matter and the basic forces that shape our universe. Starting in 2008, the ATLAS detector will search for new discoveries in the head-on collisions of protons of extraordinarily high energy. ATLAS is one of the largest collaborative efforts ever attempted in the physical sciences. There are 2100 physicists (Including 450 students) participating from more than 167 universities and laboratories in 37 countries. 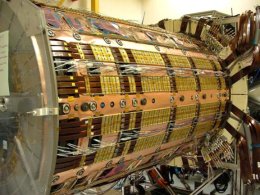 ATLAS is our largest experimental activity, including: physics studies in preparation for data-taking, software development covering core tools through Grid data management and analysis tools through the development of the fast simulation ATLFAST, trigger and track reconstruction software, and construction, commissioning and operation of the silicon tracker endcaps (SCT-EC). The group numbers 5 academics, 9 research staff and 5 postgraduate students, and this has been strengthened by a SUPA research fellowship and 2 STFC fellowships. 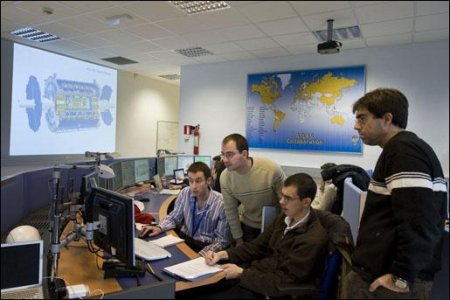 We are focused on two key areas: Higgs searches and early physics. In standard model physics the group leads the effort to study minimum bias events, one of the first measurements that will be made by ATLAS and also a key element of the strategy for commissioning the experiment. This provides important input for studies at high luminosities such as Higgs search in the ttH channel. The group is responsible for the development of trigger functionality, track reconstruction software, and the analysis strategy for early data. The group also leads efforts in the complementary area of measuring the underlying event, a key part of many LHC physics analyses. Members of the group tuned the models in soft physics model in PYTHIA to data, providing the description used by ATLAS to generate large sample of simulated physics data for the data challenge and CSC physics studies.

Understanding the multi-jet environment will be a key part of the early ATLAS physics programme, we have studied the use of azimuthal decorrelations as one of the measurements that can made during early running to characterise the multi-jet environment and benchmark physics simulation programmes such as HERWIG, PYTHIA and SHERPA. The group has also compared the performance of different jet algorithms and implemented the midpoint algorithm in the Athena. We currently co-ordinate developments of the minimum bias triggers for ATLAS.

In Higgs studies the group leads the physics studies on ttH, focussing on optimising the reconstruction of the ttH event by improving the lepton isolation and the jet reconstruction. The group is also investigating the ttH in the fully hadronic channel and are developing analyses to measure tt+jets, providing a measurement of the main background, which is one of the greatest uncertainties in the analysis. The group has also worked on H to WW in the VBF channel and benefit from CDF experience in this area. The group is also working on developing the statistical tools required to provide robust measurements of the Higgs and methods to combine different Higgs channels that will be crucial in the low mass region during low luminosity running. 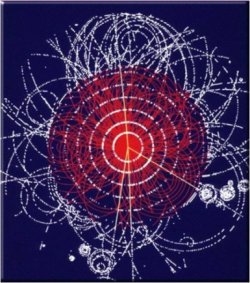 The group has exploited its expertise in e-science to develop key elements of the core ATLAS software. The ATLAS metadata interface (AMI) enables all ATLAS data from various sources to be readily accessed via a web interface. Complementing its work on AMI, the group is responsible for the development of the tag database. The tag database allows offline data to be rapidly skimmed based on a limited set of reconstructed data and this will also be crucial in effectively exploiting ATLAS data.

In analysis software, we are responsible for the development of the comparator and ATLFASTC.  These allow fast simulations to be compared and tuned for different particle types (electrons, photons, muons, jets, taus and b-jets) to the full simulation output for the same generated events. The results are then used to tune ATLFAST.

Construction, commissioning and operation of the SCT

Construction, commissioning and operation of the SCT

The group’s heritage in building detector systems (ALEPH and CDF vertex detectors, ALEPH ECAL) and in detector development has allowed us to play leading roles in the construction of the EC-SCT. Members led the work in key areas of the development of EC-SCT: radiation hardness of the Si detectors, low mass service and worked on the development of the readout hybrid and systems tests at CERN. During construction the group built and operated one of the two UK module production lines, achieving a throughput of 10 modules per week and constructing 274 modules. This required development of expertise in wire-bonding and building up an ATLAS readout system.

Members of the group were responsible for the co-ordinating the assembly of the SCT-EC in the UK and development of the Inner Detector (ID) cooling system.

Building on expertise developed in CDF, the group is responsible for the development of SCT and ID detector control system (DCS) configuration and condition databases and tools to monitor the detector performance using DCS information. This system is being developed during the commissioning phase and is providing valuable information to identify problems. The group is also developing offline monitoring software and this complements the work in the DCS DB, leading to work correlating noisy modules identified offline with their operating conditions identified in the configuration DB.

The group is leading and co-ordinating the trigger software and hardware to be used both for the first period of running, and then for Minimum Bias selection when the first Physics run starts later this year (2008). As part of this role the group has been involved in commissioning the Minimum Bias Trigger Scintillators, which are a key component of early trigger menus. The group is leading the design of these early trigger menus and is involved in developing beam related background simulations. In preparation for the first physics run the group has been leading the development of low momentum track reconstruction software together with tools to measure the tracking efficiency.