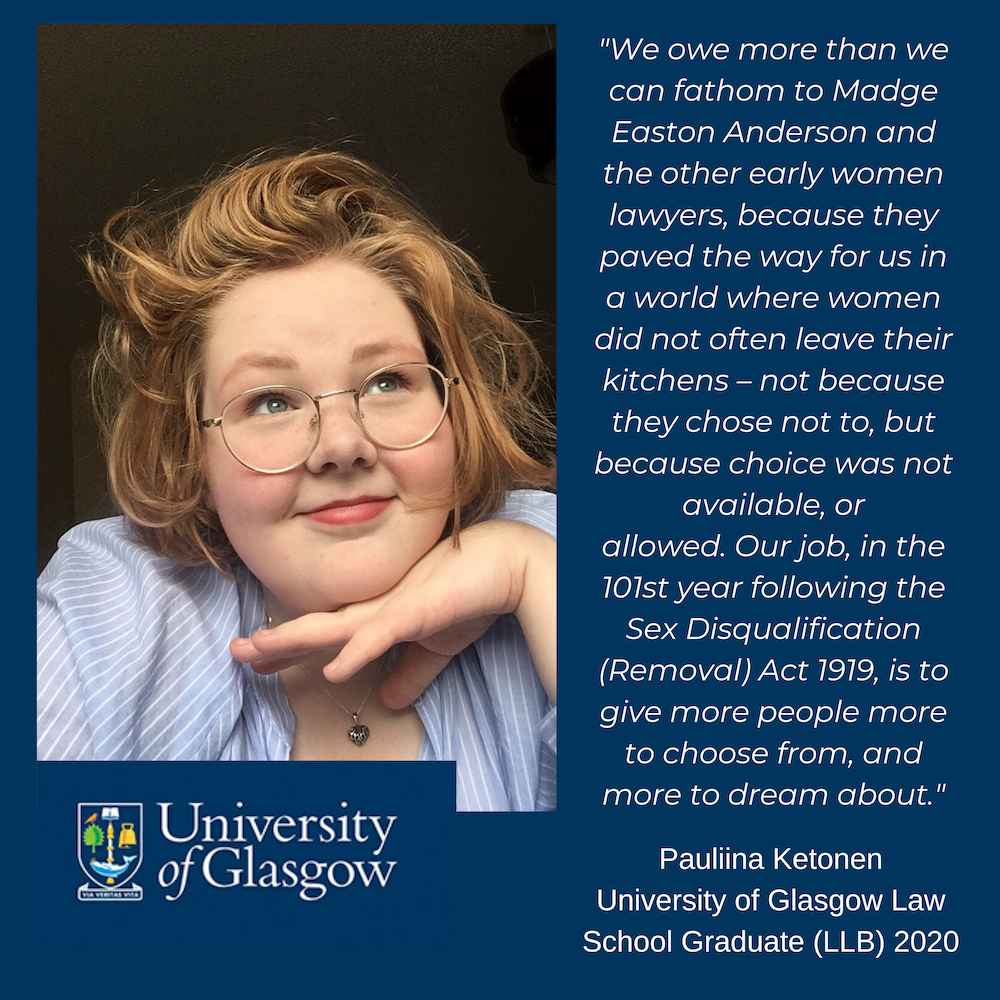 When I was asked to contribute to the 100 Voices project, I had no idea what to write about. To let you in on a secret, this is the 5th version of this text, which has been lurking in the back of my mind for months without finding its form. That form was elusive for a long time because there are so many things one could talk about on an abstract level. I navigated to my bookshelf and pulled out Mary Beard’s Women and Power: A Manifesto, snuggled between A Room of One’s Own and A Vindication of the Rights of Woman. However, I doubt you are reading this piece to learn about feminist theory. Whether you are a someone interested to hear stories that resonate with you, or a someone looking to understand experiences you have not been privy to, I suspect you are more interested in reading about something personal, rather than something abstract.

Law was not an obvious first career choice for me. In fact, it was not a career I was really aware of as a child – neither of my parents nor anyone in my immediate family were lawyers. My very first career aspiration was to be the next David Attenborough. I announced this to my mother at the age of about seven while glued to the TV, watching the nature programmes he hosted. I adored those nature programmes, even though I was always heartbroken to see the cheetah eating the antelope.

The charm of these programmes was built up of a multitude of components – not only was it incredible to see jungles, ocean floors and deserts while lounging in my living room at home, it was also magical to learn about people and cultures I had never even known existed. I was equally captivated by the acute need to protect animals and their natural habitats in the face of climate change – a concern, the magnitude of which was emphasised by countless images of skinny, drowning polar bears on the news.

I wanted to be the next Sir David because I felt that people listened to him. He was an authority figure, a sage old man who was on TV, not to preach about destruction or shame us into action, but to show the beauty of what we risked losing by not paying attention, by not doing our best to change things. In short, he was doing something meaningful.

Over the years, as my interests became more diverse, Sir David reincarnated as an expert, and with this reincarnation, the hopes of me becoming the next ‘Sir David’ grew dimmer.

The reincarnated expert was an economist. They were on TV a lot during my early teens, as the Eurozone crisis hit in late 2009. I was 12 at the time. I was too young to understand the complexities of financial regulation and EU politics, but I found them fascinating all the same. I was pulled in, like I was to jungles, ocean floors and deserts, because this world was new and unfamiliar.

As with Sir David, I could sense the influence these economists had, not only over the viewers of news, but also over the politicians tasked to ensure our country would not collapse under the weight of the financial crisis. But I also sensed that this world was closed off, and highly exclusive. It consisted entirely of men wearing expensive suits and stern faces, who spent their evenings deciphering the jargon and fundamental concepts of economics to us ordinary folk. No one, least of all Sir David, could guide me through the ecosystems of this new world.

I should point out that I was born, and grew up, in Finland, a country which is consistently ranked as one of the best for equality between the sexes in nearly all areas of life. I also have fantastic parents, who read to me when I was too young to do it myself and encouraged me to do so when I knew how. They took me to museums, where I saw art that I did not always understand, and science I was always fascinated by. They urged me to do my homework and helped me prep for exams. They supported my hobbies, no matter how short lived they were, and cheered me on when I decided to apply to study in Scotland instead of staying in Finland. They never said I was not good enough to do something, that because I was a girl I should not be interested in certain things or that some career paths were closed off from me. They neither erected nor enforced any obstacles to my interests but encouraged me to become me irrespective of my gender.

But despite their great child rearing philosophy which, as my dad once informed someone, was “häntä ei ole kasvatettu, hänen on annettu kasvaa” which roughly translates to “we’ve not raised her, but let her grow”, and despite the remarkably equal society I grew up in, I doubted my skills. I doubted whether I was good enough, despite being top of my class. I felt a sense of otherness because the media I consumed presented a very narrow view of a successful woman, and her success was most often defined not by her actions but by her social group, choice of partner and physical attributes. My observations of the world exacerbated these concerns and it gradually became clear to me that women were not often in charge – and if they were, they could not be taken seriously.

However, even though these observations sometimes made me feel discouraged, I never stopped studying. I continued to get good grades at a prestigious school and enrolled to study law here at the University of Glasgow in 2016. My time at university has been transformative and incredible. I have learned more than I ever thought possible about law and life, been the happiest, and saddest, I have ever been, and been faced with and personally proved my insecurities wrong time and time again.

I have also finally met women who have entered the exclusive clubs where previously only men reigned. So many of my lecturers and tutors have inspired me to be better, to work harder. The Scottish Feminist Judgments Project has opened my eyes to a new way of understanding law, and our role as those observing, deconstructing, and enforcing its role in our society. There are too many smaller, but once accumulated, formative, experiences to list.

Putting such enlightening experiences to words is near impossible, primarily because such words have a tendency to sound incredibly, even alienatingly, sappy. But I can with all honesty say, that I have felt seen, heard, encouraged and inspired by all of these experiences. They have ripped apart the ugly sense of otherness that has resided in me for a long time, a sense that I am not smart enough or that I am too emotional for this career. Good riddance.

Reader, I hope you will allow me to divert to the less personal for a moment. I only wish to do so in order to show you why this 100 Voices project matters. I wish to show you that this is an important part of a conversation that will go on for a long time to come. That conversation is good, and above all, necessary.

Gender matters, and we still need feminism, because our ideas of the powerful continue to be resolutely male. I direct you to Beard’s book, Women and Power. There she discusses cultural stereotypes of the powerful – for example, that when we are asked to think of doctors or professors, the person in our minds tends to be a man. Beard points out that as women are not seen as being part of these stereotypes, we have to kick down doors or break into power through glass ceilings, and are therefore seen as “taking something to which [we] are not quite entitled.” Until the idea of power changes, until women can be truly listened to and taken seriously as part of the powerful, as people with influence who are capable of serious leadership, gender matters.

In law, gender matters particularly because according to studies carried out by the Law Society of Scotland and of England, the Profile of the Profession and Women in Leadership in Law reports, respectively, women and men do not progress in a similar way in the profession, despite similar skillsets and motivations. Women and other minorities are underrepresented as QCs, equity partners and judges. These groups are more likely to be subject to harassment at the workplace, feel a sense of otherness and leave the profession altogether. Furthermore, women rising through the ranks in the legal profession still make waves. Take Lady Hale, one well-known example, who has achieved numerous national firsts during her career, the last of which was her appointment as the President of the Supreme Court. The female judges following her have not caused such waves. Nor will the next female Supreme Court President, or the one after that. But until that happens, gender matters.

Gender matters, because having the right to choose and to enforce that choice is an incredibly powerful thing. We owe more than we can fathom to Madge Easton Anderson and the other early woman lawyers, because they paved the way for us in a world where women did not often leave their kitchens – not because they chose not to, but because choice was not available, or allowed. In 2020, most of us have more choice over the course of our lives, be that personal or professional, than ever. But some of us do not. Some of us do not even know they could have choices. Our job, in the 101st year following the Sex Disqualification (Removal) Act 1919, is to give more people more to choose from, and more to dream about.

To return to the more personal, I have just finished my undergraduate degree. In many ways, I have surpassed all my childhood and teenage expectations of what and who I could be and for this I am incredibly grateful. The future is both exciting and scary – if all goes to plan, I will continue my studies in law at postgraduate level in September. Beyond that, I do not really know what will happen or where I will end up. I am yet to meet David Attenborough, but I have been in the same room with Lady Hale. She, among other incredible women in law, has and will continue, to inspire me to become exactly who I want to be.