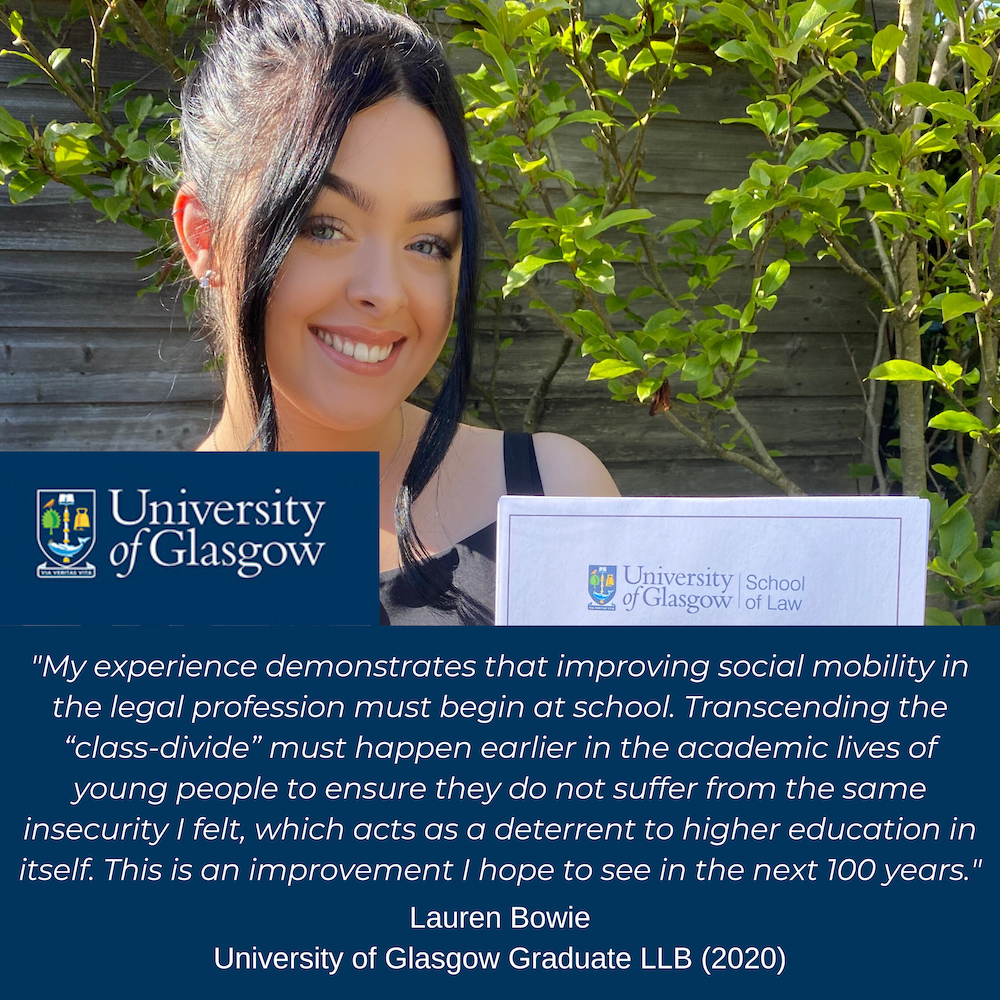 A profession presented on television throughout my youth as one dominated by wealthy men in slick suits constructing quick quips in a court room. Not a young girl from a disadvantaged area with a broad accent. Yet, here I am. Graduating with a degree in Scots Law in the centenary year of Madge Easton Anderson’s admission as a law agent.

This stereotypical perception continues to plague the legal profession which, as a result, lacks diversity both in terms of gender and social mobility.

As a teenager, I developed a passion for the law when I realised it was the only way I felt I could effect change. The law and the policies which underpin it determined: the amount of benefits households in my area would receive; it dictated how long the Modern Languages corridor in my school would be closed when the ceiling collapsed; whether we would eventually get new chemistry equipment; and when we would no longer have to share outdated textbooks between three pupils. Despite deficiencies in academic support – coupled with the difficulties many pupils suffered at home – the lack of resources continually afforded to struggling schools like mine was astounding. In my penultimate year of school, my MSP wrote an article in the local newspaper which vilified my school, our lack of academic success and failure to produce employable students in comparison to other schools in the area. They failed to acknowledge the stark contrast between the relevant school catchment areas in terms of SIMD levels and thus, the attainment gap as a whole. Traditional depictions in the media are not the only reason for the lack of social mobility in the legal profession. I believe the general lack of belief and support given to young people from disadvantaged areas also plays a significant part.

It was this newspaper article, coupled with the relentless narrative that “people like me from places like mine” did not go on to study law at one of the best universities in the UK that made me determined to succeed. This drive was not only to satisfy my own personal need to prove I could defy the odds, but to prove to all other young people that you are more than your circumstances.

My determination began to waver when I arrived at the University of Glasgow. I felt I had grown up in an alternate universe to most of my classmates. To say I suffered a culture shock is an understatement. It seemed to me that private education, financial support from parents - which negated the need for a part-time job - and work experience at prestigious law firms through nepotism were the norm. I continued to work twenty hours per week – as I had since I was sixteen years old – and had only set foot in a law firm once when applying for a scholarship that I did not receive. I felt demoralised. I felt that I didn’t deserve to be there. The stereotypical depiction of a lawyer began to look more and more accurate to me, and my motivation dwindled.

It was not until the University of Glasgow provided me with the opportunity to gain a placement with the Citizens Advice Bureau and work with the Social Mobility Foundation that my passion for the law was rekindled. Despite feeling demoralised, the legal knowledge I had gained allowed me to empower the most vulnerable in society by making them aware of their rights. Clients at the CAB did not know nor care about my background, they simply knew that I had the skills to help them. The SMF allowed me to combine my legal interests with my aim to improve social mobility and showed me that organisations exist which truly strive to help young people from disadvantaged backgrounds enter the legal profession.

I wish I could go back in time and tell my eighteen-year-old self that I deserved to be at university as much as anyone else. Now, despite graduating with a first-class degree, a training contract from Pinsent Masons and a wealth of work experience, I still feel like an imposter.

I am proud of my journey and now know that it is not unique. I am one of a number of young people from disadvantaged backgrounds who have succeeded. However, my experience demonstrates that improving social mobility in the legal profession must begin at school. Transcending the “class-divide” must happen earlier in the academic lives of young people to ensure they do not suffer from the same insecurity I felt, which acts as a deterrent to higher education in itself. This is an improvement I hope to see in the next 100 years.

These experiences have inspired me to help young people realise they can achieve anything, no matter their background. On this basis, I am currently developing a website called Legable which collates all funding, mentoring opportunities and work experience available to aspiring and current law students in an attempt to widen access to the profession. I plan to contact secondary schools across Scotland (and potentially the rest of the UK) to raise awareness of this platform and hopefully work with other organisations which aim to improve social mobility in the legal profession.

My university experience has given me the confidence and inspiration to achieve my goals and to help others realise theirs, notwithstanding their circumstances. In the last 100 years, a shift has occurred in the legal profession towards a more inclusive culture in terms of diversity and equality, but there is still much work to be done.

I am proud to be in the UofG Law Class of 2020 because it gives me the platform to show other young people that your background does not determine your success.