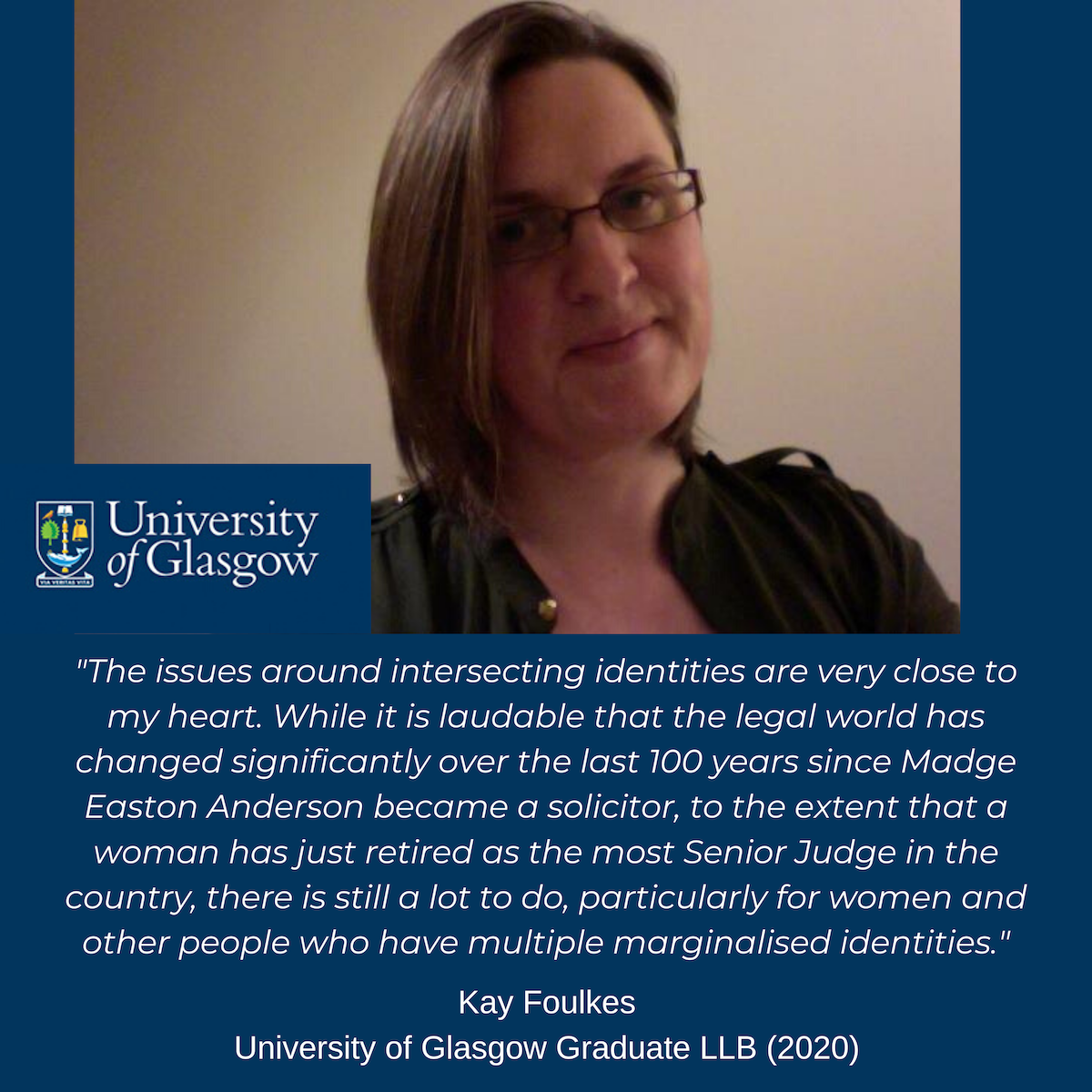 I did not grow up wanting to be a lawyer rather I became one almost by accident.

I first attended the University of Glasgow in 1996 focusing on first engineering and then science. I also joined the University Officer Training Corps as an Officer Cadet, later transferring to a local Territorial Army unit as a platoon commander, as part of my plan to become an army officer. However, until the year 2000 LGBT people were banned from openly serving in the military and I had to make a choice between pursuing the career I had dreamed of or being myself, I chose the latter. I transitioned in August 1999 at the age of 21, coming out publicly as transsexual and starting to live as a woman. As a military career was no longer feasible I had to rethink my entire life plan.

At university I was supported by an exceptional Adviser of Studies, Dr Iain Allison, who tried to get advice from colleagues throughout the Russell Group but could find no-one who had at that time dealt with a student transitioning. There were also supportive students including the young women who of their own volition approached the Geology Department staff to make it known that they were happy to share accommodation with me on field trips; these were the same women who had made me stop using the unisex disabled toilet and dragged me into the ladies. This was also the point where I joined the university’s LGB society and convinced them that the time was right to become an LGBT society. There were also no issues with changing my student records and I was able to work as a Senior Resident in Murano street without any issues. I cannot understate how supportive the University of Glasgow was back when most employers and many universities were openly hostile towards the idea of trans inclusion. Despite all the support I had at university it was all a bit too much for me and in March 2000 I dropped out of university with a DipHE in General Science.

I eventually found myself in London where I joined the Civil Service, working first for the Office of The Immigration Service Commissioner and a year later transferring to the Home Office, where I spent 7 years as a Home Office Presenting Officer. This role was where I first discovered a love for the law, regularly appearing before the Asylum and Immigration Tribunal and acting as national lead for Iranian Asylum Claims. Outside of my job I was a steering group member of the Home Office’s LGBT+ staff network (Spectrum) and involved in setting up the Civil Service wide network for trans people (a:gender). I gained a huge amount of experience, including conducting between four and five thousand cases and providing instructions to Treasury Solicitors in the upper courts in Iranian cases of significant import. My ability as a legal advocate garnered considerable praise from both the immigration judiciary and opposing legal practitioners.

Unfortunately, my experiences in the Home Office were not all positive. In 2005 I made a request for minor adjustments under the Disability Discrimination Act as I needed some flexibility in my work pattern due to the impact of my disability. Rather than make these adjustments they initially removed me from my public facing role and then fought me at every juncture. I went through 5 years of fighting to stay in my job, becoming more ill the longer this went on until I was given the option of medical retirement or compulsory severance at the age of 32. I then went through the hardest period of my life as my relationship of 11 years ended and my health deteriorated, something which I have worked to recover from over the last decade.

My attempt to return to work at a Further Education College did not go well and I eventually found myself signing up to the Law and Business access course at the University before joining the LLB in 2013. I completed my degree this year, having managed to convince the law school to let me study part time. This is a huge personal achievement for me and I specifically chose to study at Glasgow where I felt I had unfinished business. 21 years later, as I finally hit the point where I have spent more of my life post transition than pre transition, that business seems to be done. The learning that I have undertaken on the LLB has complimented my work experience significantly. I had a lot to learn, although I already had a good grounding in Asylum, immigration, Human Rights and Equalities Law; and had been considered to be an exceptionally skilled Presenting Officer by many judges and lawyers.

Outside of university I put my knowledge and experience to use supporting LGBTQ+ asylum seekers with LGBT Unity, an organisation which is run by and for LGBTQI+ asylum seekers in Glasgow. This culminated in my dissertation being focused on the potential challenges faced by LGBTQI+ asylum seekers in establishing their identities before a judiciary that is overwhelmingly white, straight and cisgender, with the associated challenge of unconscious/implicit bias. This is something I have observed first-hand both as a Home Office Presenting Officer and appearing as a supporting/expert witness before the tribunal on many occasions; though I have also seen some wonderfully self-aware and compassionate Immigration Judges making very thoughtful decisions.

The issues around intersecting identities are very close to my heart. While it is laudable that the legal world has changed significantly over the last 100 years since Madge Easton Anderson became a solicitor, to the extent that a woman has just retired as the most Senior Judge in the country, there is still a lot to do, particularly for women and other people who have multiple marginalised identities. I chose to focus on subjects related to equalities and socio-legal studies at honours, something which has helped me understand better how the law has come to be in the form that it is. The predominance of white, male, non-disabled, straight and cisgender voices is something that is very apparent and something which is generally reflected in legal education and the wider profession in Scotland.

While a significant proportion of legal academics in Scotland are women those with other marginalised identities are less apparent and in several years at university the proportion of essential reading by authors with marginalised identities pales into insignificance beside that of straight white non-disabled cisgender men. When more students and lawyers can tell you the details of a case involving a lady upset about a snail in her ginger beer than one as important as Knight v Wedderburn we still have a long way to go. Equally, while in 1996 Lady Cosgrove was appointed as the first female Court of Session Judge, this was 31 years after Dame Elizabeth Lane was appointed to the High Court in England. The High Court has also seen Dame Linda Dobbs appointed as the first black judge in 2004 and Master Victoria McCloud as the first openly trans judge in 2006, something I believe we have yet to see in the Court of Session.

This is not to say that everything is all bad, as attending Law School has introduced me to voices I might not otherwise have heard: through being introduced to the work of Jasbir Puar and Achille Mbembe in Law and Social Theory; taking part in a Scottish Feminist Judgement Project workshop run by  Chloë Kennedy, Sharon Cowan and Vanessa Munro; and reading the work of unashamedly openly trans and queer legal academics such as Alex Sharpe, Stephen Whittle, Kenji Yoshido, and Senthorun Raj. Unfortunately, these are not experiences which many of my law school colleagues will share as they have come through optional courses and independent study rather than being part of a compulsory course. That said I have met some amazing young people on the LLB over the last 7 years, people who will make a significant change to the world as they focus on something more than commercial law and making money. I hope by being the older student who is not scared to speak up in class and by sharing some of my experience I will have in some way contributed to their learning.

I have taken part in this project as I think it is important that there is diversity in the voices which take part and that those of us who have traditionally been less visible. I spent years hiding or trying to blend in rather than seeing the value which my voice has. With the significant and sudden changes brought on by the covid-19 epidemic I am unsure what is next. However, given the life I have lived is very different from the life I expected growing up, anything is possible. At the same time as a 42-year-old woman with a significant break in my career history, who is also trans and disabled, the additional challenges I face due to these intersecting identities is something I am very much aware of as I look to the future.