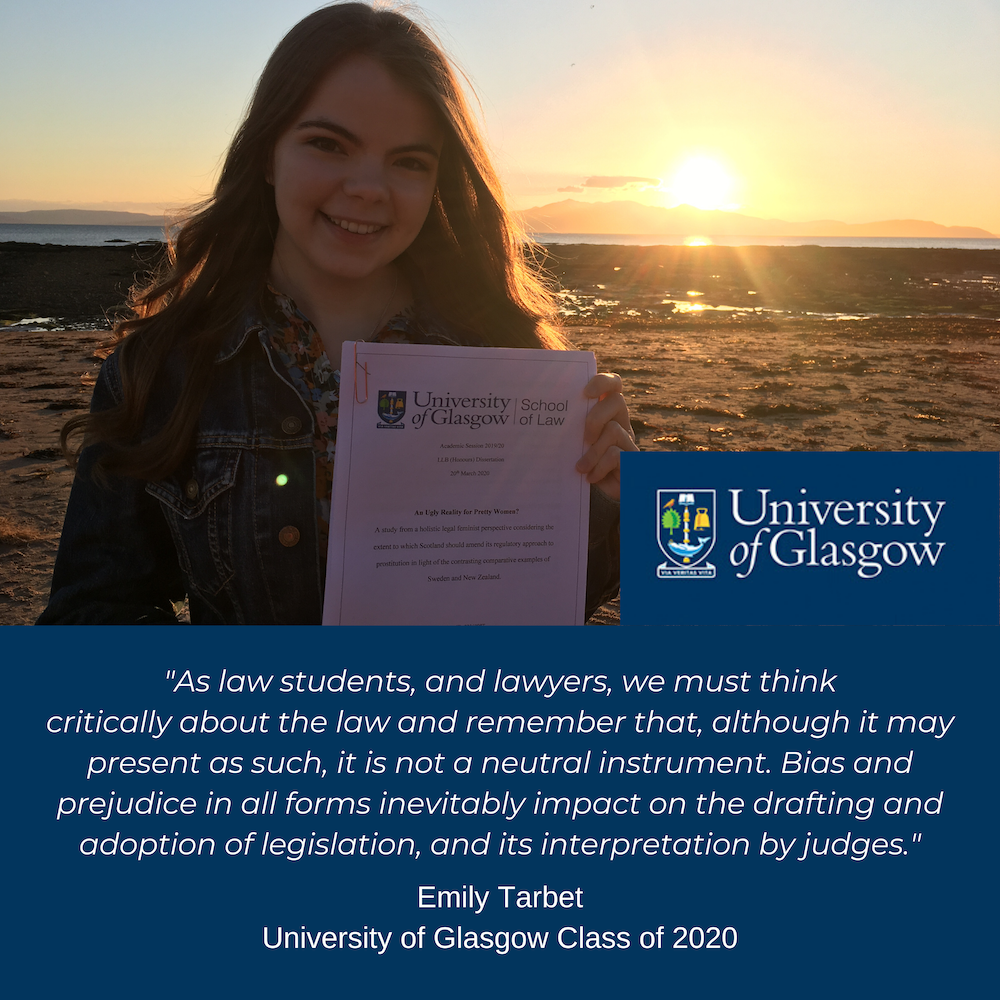 Firstly, I want to express how delighted I am to have been given the chance to contribute to such an important project, celebrating the voices of an inspiring group of women. It has provided me with the perfect opportunity to reflect on my experiences during my law degree as the end of my undergraduate education at the University of Glasgow approaches.

As a woman in what remains in many ways a predominantly male field (despite important progress in gender representation having been made) equality and diversity have been at the forefront of my mind throughout my university education. When I think of the moments in my undergraduate career that have stood out to me and really shaped my experience, these have been the crucial components.

The best example of this is the incredible experience of studying abroad in Paris that I had in my third year. In and of itself, this was an opportunity I feel very lucky to have had for many reasons, including the diverse range of both students and professors from all over the world that I interacted and exchanged ideas with every day. However, a specific highlight was the course offering, comprising many theoretical, interdisciplinary options which I hadn’t previously had the chance to study. I was particularly interested in a course called Gender and Queer law, which turned out to be one of the best courses I have ever taken.

I had a wonderful female Franco-American professor, Marie Mercat-Bruns, who exemplified everything an educator should be. Her enthusiasm and passion for her subject was palpable and she took such great interest in her students’ perspectives on class materials. The materials themselves were varied and thought-provoking, as were the discussions we had each week, about topics ranging from reproductive and transgender rights to same sex marriage and discrimination at work. Questions of justice, fairness and equality permeated every class. Marie also allowed us a great degree of latitude in selecting and presenting our research for assessment, and actively encouraged us to be creative.

The class enlightened me to an entirely different way of studying the law, where the supposedly objective façade that the law presents was challenged and deconstructed using feminist and queer legal theory. When I returned to Scotland, I knew I wanted to explore this area of law further in my fourth year. I did so primarily through my dissertation, which constituted a comparative study of the regulatory approach to sex work in Scotland, Sweden and New Zealand from a legal feminist perspective. I also took advantage of the opportunity to attend one of the fantastic Scottish Feminist Judgment Project workshops in September 2019, where I learned about how adopting a feminist analysis might influence or change existing court judgments.

It is my hope that, over the next 100 years, this type of work will only become more prominent and frequent, and that this aspect of studying the law will become more integrated into legal education at universities. As law students, and lawyers, we must think critically about the law and remember that, although it may present as such, it is not a neutral instrument. Bias and prejudice in all forms inevitably impact on the drafting and adoption of legislation, and its interpretation by judges. Social movements that have risen to prominence in the past few years, such as the MeToo movement, and more recently the Black Lives Matter movement, remind us of the intersection of sex, gender, race, sexuality and other characteristics both with each other and with the law, and we should seek in our study of the law to actively engage with such intersections. The earlier we instil this as a way of viewing and challenging the law, the more impactful it will hopefully be and the greater positive influence we will see on equality and diversity both within the legal world and outwith it.

I would be remiss not to take this opportunity to pay homage to the extraordinary women in my life that have helped me to be where I am today. I have been fortunate to be taught by a range of fantastic female educators, from school through university, who have encouraged my creativity and critical thinking. My wonderful friends have been a constant source of encouragement and support, and in particular it was a privilege to this year work alongside six other exceptional women as participants in the European Human Rights Project 2019-20 (as well as some exceptional men of course!). Finally, my family, which includes some truly incredible women – my mum, sister and two grandmothers amongst others. My time at university has seldom been without adversity, and without the love and guidance of these women, and that of my entire family, I would not have overcome such adversity and now be the first in my immediate family to be graduating from university in just a few weeks.

The reason I applied to study law at Glasgow nearly five years ago was, as cliché as it sounds, to gain the tools, skills and knowledge that would allow me to make a positive difference in the world, and spend my career doing so. Not only does that remain my aspiration at the culmination of my legal education, but it has been doubly reinforced!