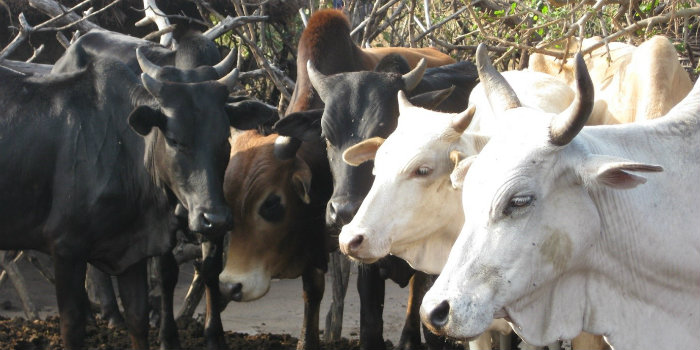 For a long time animal African trypanosomiasis (AAT) has been neglected by both endemic countries and donors, and has only very recently seen a renewed focus on its research and policy. Targeting AAT to ensure healthy livestock is key to feed a growing population in Africa and instrumental in achieving the second of the Sustainable Development Goals, whose objective is to "end hunger, achieve food security and improved nutrition and promote sustainable agriculture".

Research groups from three Scottish academic Institutions (the University of Strathclyde, the University of Glasgow and the Roslin Institute), in collaboration with GALVmed, are working on an ambitious project funded by the Biotechnology and Biological Sciences Research Council (BBSRC) aimed at developing new drugs for animal African trypanosomiasis (AAT), one of the most devastating livestock diseases in sub-Saharan Africa.

But for the Tsetse-fly the whole history of South Central Africa would be different  —Sir H. H. Johnston

AAT, also known as African animal trypanosomosis or nagana, remains one of the biggest constraints to agricultural production and animal husbandry in sub-Saharan Africa. The disease is caused by infection with microscopic, blood-dwelling parasites called trypanosomes.

Three main species of trypanosomes are responsible for AAT: Trypanosoma congolense, Trypanosoma vivax, and, to a lesser extent, Trypanosoma brucei. Two subspecies of T. brucei can also infect man, causing the serious and often fatal disease sleeping sickness. The parasites responsible for AAT are transmitted from infected to uninfected animals mainly by the tsetse fly (Glossina species), although also other biting flies (notably horseflies and stable flies) can play a role in transmission.

Once infected, animals suffer from intermittent fever, anaemia, emaciation, decreased fertility, abortion, and may eventually die. Although all domestic animals are susceptible, the main financial losses (which run into billions US$ each year) are linked to the cattle sector, a crucial source of milk, meat, draught power and a capital in itself for poor smallholder farmers. It has been hypothesised that because of the tsetse fly (and the parasites it transmits) Africa has never been able to produce an agricultural surplus.

Insecticides are useful in combating the tsetse, but the use of specific veterinary drugs to prevent or treat trypanosome infection remain the mainstay for AAT control. Drug administration has the double effect of ensuring animal health and production and of reducing the animal reservoir from which the infection could spread.

However, only three drugs effective in killing animal trypanosomes are generally available: diminazene (to treat the disease), isometamidium (to prevent the disease) and homidium (for both treatment and prevention). Unfortunately, along with being old and relatively toxic, following years of use these drugs are becoming less effective due to a worrying increase in drug resistant parasites.

Development of new veterinary trypanocides is paramount, but no new compounds are expected to reach the market anytime soon, because of past chronic lack of resources and political will. However, the tide is finally changing and a renewed interest and resources are emerging to tackle AAT. In this regard, the Food and Agriculture Organization of the United Nations (FAO) has recently outlined a stepwise approach aimed at creating and expanding areas free of AAT, with the final goal of eliminating the disease for good.

The grant awarded to Scottish researchers will allow them to work at the development of new drugs for AAT, but also to study and better understand the biology of the key animal trypanosomes and their responses to drugs.

Traditionally, drug discovery for AAT was based around work conducted on the universal model organism T. brucei, which is easy to grow in the laboratory and for which many tools to study its biology at the molecular level exist.

Nearly 30 years ago researchers were able to develop a culture solution containing all the nutrients (including sugars, lipids and amino acids) T. brucei requires to thrive and multiply outside its host. By using this expedient it is possible to grow millions of parasites in small plastic flasks ("in vitro") in an easy, cheap and reproducible way.

Obtaining trypanosomes from their natural animal host each time an experiment is planned would be far too expensive and complex, as well as unethical! But a similar medium does not to exist for T. vivax and, although it has been developed for T. congolense, it is still suboptimal (very few parasite isolates grow in it). 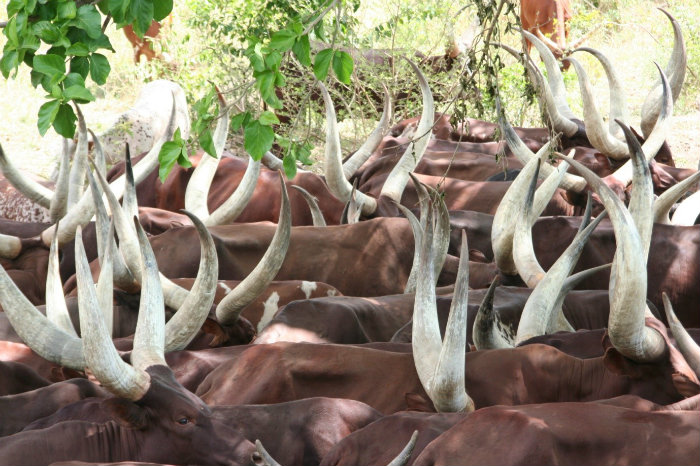 For this reason, until now working with the two principal veterinary parasites has been more difficult than with T. brucei. Better tools to grow and manipulate T. vivax and T. congolense are even more important if we consider that these latter two species differ substantially from T. brucei in drug response, drug transport and resistance and even basic metabolism. Hence, findings in T. brucei do not necessarily translate to T. congolense and T. vivax.

What will researchers do about it?

One of the main aims of the project is to develop an improved in vitro culture system for the study of T. congolense (both for standard strains already in use in the laboratory and for not routinely grown strains, as, for example, drug resistant parasites isolated during field work).

This refinement is needed as the currently used medium contains non-physiologically high levels of nutrients which may interfere with standard assays, including screening of compound libraries for potential new drugs. Researchers from Dr Liam Morrison’s group will use metabolomics analysis (a technique which allows the determination of the full list of the small molecules present in a biological sample), to empirically characterise parasites’ metabolite usage and production.

This will allow them to formulate a list of essential nutrients for the drug-relevant life-cycle stage mammalian bloodstream form, as previously done for T. brucei. By using state-of-the-art methods, such as isotope labelling metabolomics, researchers will follow the fate of single metabolites inside the cell, improving their understanding of key metabolic pathways. Transcriptomics (the study of the whole set of gene readouts in a cell) experiments will then help the identification of genes involved in metabolism.

All the data generated from these "omics" experiments carried out during the medium development will be used by a computational modeller from Prof Michael Barrett’s group (Wellcome Centre for Molecular Parasitology of the University of Glasgow) to create a comparative model of T. congolense and T. vivax metabolism, a tool of great value for current and future drug discovery for AAT, which will facilitate drug target identification and studies on mode of action and resistance of new potential drug candidates.

These tools will also be very useful for the progression of a novel class of trypanocidal compounds identified by the researchers during a previous GALVmed-funded research project. The compound library, synthesised by Prof Colin Suckling’s group (Department of Pure and Applied Chemistry of the University of Strathclyde), will be extended to improve activity based on structure-activity relationship studies. The compounds belong to a class that have DNA as their primary target (hence their name Strathclyde-minor groove binders, or S-MGBs). Novel structural features discovered at Strathclyde provide a collection of compounds with very promising activity against four species of trypanosome and lack of toxicity in animal models of trypanosomiasis. The best compounds are now being evaluated for their potential for development (September 2017). 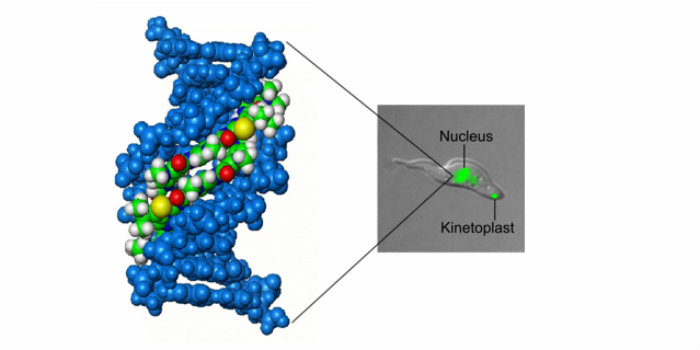 Left: a representation of a model of a Strathclyde-MGB (green, white, blue, red, yellow) bound to DNA (blue) in the minor groove. Right: image of a Trypanosoma congolense treated with a fluorescent S-MGB, which localises in the parasite's DNA-containing organelles (nucleus and kinetoplast).

Researchers from the University of Glasgow led by Prof Michael Barrett and Prof Harry de Koning, will assist in the progression of these compounds, evaluating potential risks of cross-resistance to currently available trypanocides and assessing the resistance risk and mechanisms by generating resistant trypanosomes and analysing their differences to wild type parasites using "omics" methodologies. The compounds’ mode of action will also be studied by means of metabolomics studies and other approaches.

As suitable leads are identified, they will enter the far too long neglected drug discovery pipeline for AAT and enter a clinical development program with GALVmed.‌