What is Attachment Disorder (AD)? 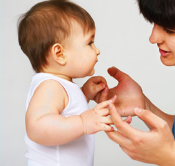 AD is a serious disorder affecting social functioning in children who have experienced abuse and/or neglect.   There are two subtypes: an Inhibited Type (thought to be very rare) in which children are emotionally withdrawn, fearful or "hypervigilant" and unpredictable in their social responses and a Disinhibited Type (called Disinhibited Social Engagement Disorder (DSED) in DSM-5) in which children are indiscriminately friendly and do not recognise social boundaries.  Children with AD (whether Inhibited or Disinhibited) have difficulties developing intimate relationships and this can have a profound effect on their ability to settle into a foster or adoptive placement and on their friendships.

‌In materially deprived populations, about 1% of pre-school and early school-age children have an Attachment Disorder and this prevalence is much higher in children in the care system.  The great majority of children with AD have a complex presentation with at least one other psychiatric diagnosis, often Attention Deficit Hyperactivity Disorder (ADHD) or Conduct Disorder. We do not know the pervalence in the teenage years or in adulthood, but indiscriminate friendliness can persist into adult life.

AD is believed to be caused by abuse and/or neglect but not all abused and/or neglected children develop RAD.  There appear also to be genetic risk or resilience factors for AD (in the context of abuse or neglect), but we do not yet know what these are.

Other symptoms sometimes associated with AD

We have developed various measures for assessing the symptoms of AD and DSED.   On this website you can find various papers that describe our work and also copies of measures themselves that you are free to download and use. We only ask that, if you are using the measures in research, you let us know that you are doing so.  If you have any questions about the measures, please don't hesitate to contact us - irene.oneill@glasgow.ac.uk

If you want to make a diagnosis based on the measures we recommend that you use the ICD or DSM classification systems and simply use the measures to identify whether or not the key symptoms are present.

If you would like to use the measures to make research diagnosis, we recommend that you use the method described in the article - 2013 Prevalence of RAD in a deprived population