Laboratory tests at the Scottish Universities Environmental Research Centre (SUERC) on 21 different bottles of rare Scotch whisky, potentially worth around £635,000, have confirmed them all as modern fakes.

Based on these results, Rare Whisky 101 (RW101), one of the world’s leading experts in rare whisky, has estimated that around £41million worth of rare whisky currently circulating in the secondary market, and present in existing collections, is fake. That’s more than the entire UK auction market which RW101 has predicted to exceed £36million by the end of 2018.

On the back of growing concern surrounding the proliferation of fake whisky in the secondary market, RW101 teamed up with geochemistry experts at SUERC, home to one of the UK’s four Radiocarbon Accelerator Units, to randomly sample, forensically test and analyse a range of different whiskies.‌‌

From 55 bottles of Scotch whisky that were acquired by RW101 from different sources through the secondary market, 21 were confirmed as either outright fakes or whiskies not distilled in the year declared. All malt whisky samples purporting to be from around 1900 or earlier were found to be fake.

The results, from more than nine months of testing, indicate that the problem of fake rare Scotch whisky in the secondary market is much more prevalent than originally thought, infiltrating all major routes to market for rare and vintage whisky.

Of particular note are three bottles of rare whisky acquired recently by RW101 through three different channels – a bottle of Ardbeg 1885 acquired from a private owner, a bottle of rare Thorne’s Heritage early 20th Century blended whisky purchased from an auctioneer and a bottle of Ardbeg purported to be bottled in the 1960s bought from a retailer. All three were proven to be fakes.‌‌ 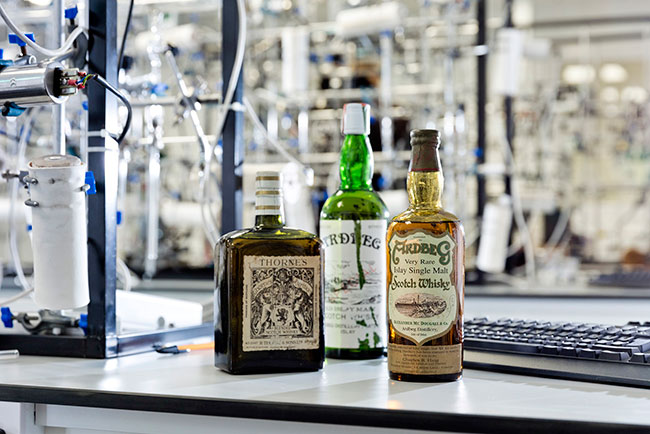 If tests had proven all 21 bottles to be genuine, collectively they could have been valued at around £635,000. Individual bottles could have fetched anything from £2,500 for the lowest value bottle right up to an estimated £150,000 for the oldest, most valuable bottle.

Commenting on the findings, co-founder of Rare Whisky 101 David Robertson said: “We are clearly disappointed to discover that, without exception, every single 'antique' pre-1900 distilled whisky RW101 have had analysed over the last 2 years has proven to be fake. It is our genuine belief that every purported pre-1900 - and in many cases much later - bottle should be assumed fake until proven genuine, certainly if the bottle claims to be a single malt Scotch whisky. This problem will only grow as prices for rare bottles continue to increase”.

Co-founder of Rare Whisky 101 Andy Simpson added: “As we have always stated, each buyer must seek to assure themselves of the authenticity and veracity of any potential acquisition. The exploding demand for rare whisky is inevitably attracting rogue elements to the sector. While we know that the vast majority of rare whisky vendors aren’t knowingly selling fake whisky to unsuspecting buyers, we would implore auction houses, retailers, brand owners and buyers to refrain from selling or purchasing any pre-1900 distilled Scotch whisky unless it has a professional certificate of distillation year/vintage by a carbon dating laboratory.”

The process through which these whiskies have been dated is based on the evolving science of identifying levels of radiocarbon (or C-14) within the liquid.

Radiocarbon is produced continuously in the upper atmosphere at a virtually constant rate so that everything, while alive, has approximately the same level of radiocarbon. During the industrial age, high levels of fossil fuel burning released large volumes of non-radioactive carbon which diluted radiocarbon levels.

However, everything changed in the 1950s with the onset of the Cold War and the commencement of atmospheric nuclear weapons tests, leading to an increase in atmospheric radiocarbon levels which, in turn, were absorbed by all living organisms. These levels continued to increase until 1963, when the test-ban treaty ensured that radiocarbon levels would steadily decline over the ensuing decades.

So, what has all this got to do with fake whisky? Put simply, minute levels of radiocarbon were absorbed by the barley as it grew, providing each whisky with its own radioactive date signature. This means that the scientists at SUERC are able to establish that any whisky with low radiocarbon levels must have been distilled prior to the nuclear era and any whisky with higher levels of radiocarbon must have been distilled after 1955. Such is the accuracy of the process that SUERC are able to pinpoint likely distillation years to within a 2 to 3 year period post the 1950s. For samples pre-dating the 1950s, the technique provides a wider vintage band.

Professor Gordon Cook, head of the SUERC Radiocarbon Laboratory, said: “We have had significant help from the major distillers who provided whisky samples of known age that allowed us to start this work. However, it has been our collaboration with Rare Whisky 101 and their provision of really old and rare whiskies that has allowed us to really push this work forward to what we consider to be the Gold Standard technique for identifying the age of a whisky.

“It is disappointing to see the large percentage of vintage whiskies that turn out to be fake. However, we have developed a very powerful technique to beat the fraudsters and I’d advise anyone thinking about selling what they consider to be an early product to have it analysed. Recently, we have analysed four bottles of early whisky (including a rye whisky from the USA), purported to have been distilled between the mid-19th to the early 20th century, for members of the general public. Of these, three were genuine, so there are really old and rare whiskies in existence.”

The secondary (auction) market for rare whisky is now big business. Rare Whisky 101 has forecasted the market in the UK alone to exceed 100,000 bottles for 2018, at a value of more than £36million.