One of the most interesting ways to trace the reception of Ramsay is to delve into the works of other writers and find what they are saying about our poet. Are they mimicing his style, are they referring to him as an outright inspiration, or are they making an imaginative use of his many scenes and characters?

In this section we will gather some examples of allusion to Ramsay: those sublter acts of homage that are easily lost in the din of an expanding print culture.

David Sillar (1760-1830) was a close friend of Robert Burns and like the Bard himself he would occassionally look to Ramsay's writing as a source of inspiration. This is clear in the title-page of his Poems, published in 1789 by John Wilson of Kilmarnock; the same printer of Burns's monumental debut Poems, Chiefly in the Scottish Dialect (1786). The title-pages of Sillar and Burns are incredibly alike, but whereas Burns offers an epigraph by 'Anonymous' (ie. himself), Sillar offers seven lines of Ramsay: 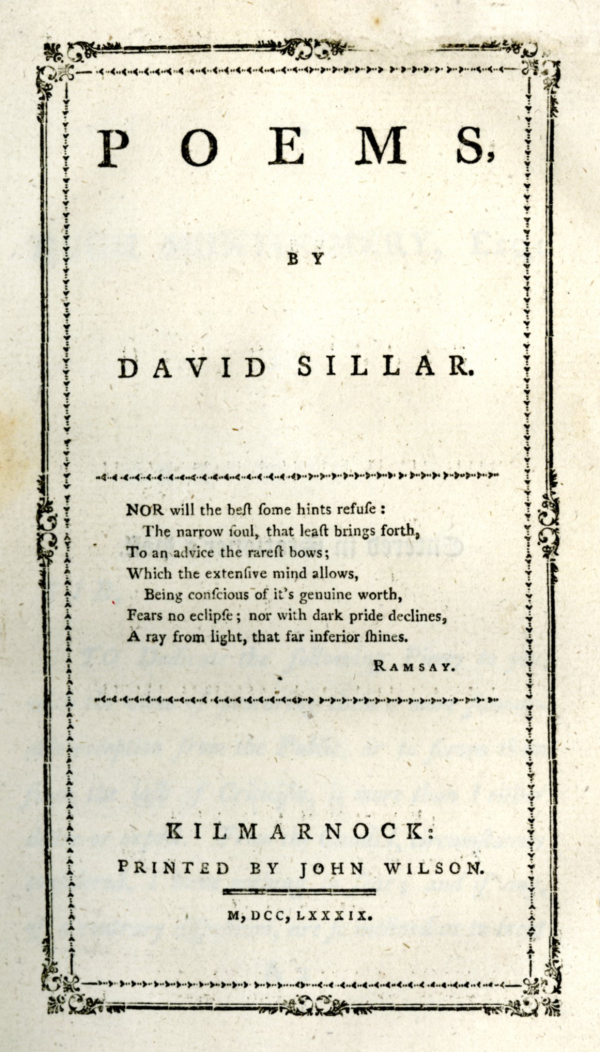 The lines comprise the second stanza of Ramsay's 'The Address of the Muse, to the Right Honourable George Drummond, Esq., Lord Provost; and Council of Edinburgh' (Poems 1728).

You will probably have read Ramsay's famous poem Lucky Spence's Last Advice. It was likely published in 1718, and was collected in Ramsay's debut Poems (1721), where Lucky Spence is described as 'a famous Bawd who flourished for several Years about the Beginning of the Eighteenth Century' with 'her Lodgings near Holyrood-house; she made many a benefit Night to herself, by putting a Trade in the Hands of young Lasses that had a little Pertness, strong Passions, Abundance of Laziness, and no Fore-thought.'

As our Edition will show, the text of Lucky Spence changed as it was reprinted in broadside, chapbook, and collected formats. These changes were mostly minor, with one or two shifts in language (such as 'from' changing to 'frae'). The image below shows the beginning of the first chapbook edition: 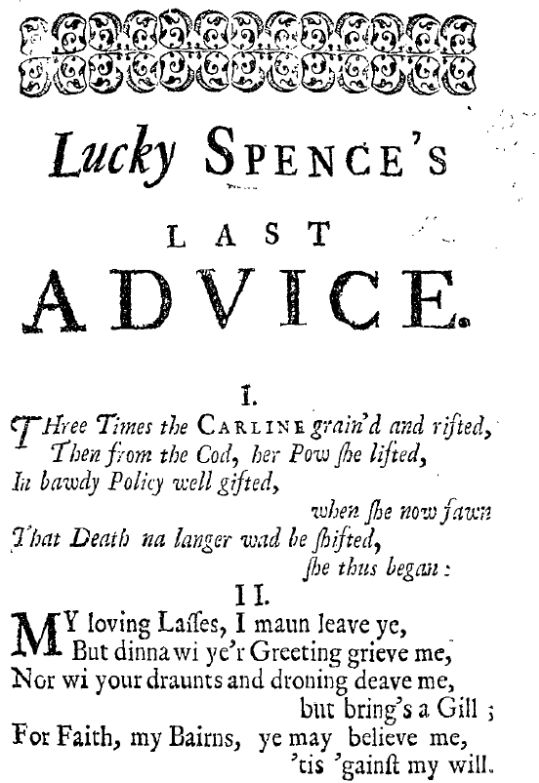 A century later, the poem was recycled in an Edinburgh chapbook entitled An Account of the Behaviour of Mrs. M'Kinnon, Who was executed at Edinburgh, on Wednesday the 16th of April, 1823, for the inhuman Murder of William Howat. The subtitle goes on: Also, an advice to her friends, while under sentence of death. This 'advice' follows the same structure and most of the same content as Ramsay's original: 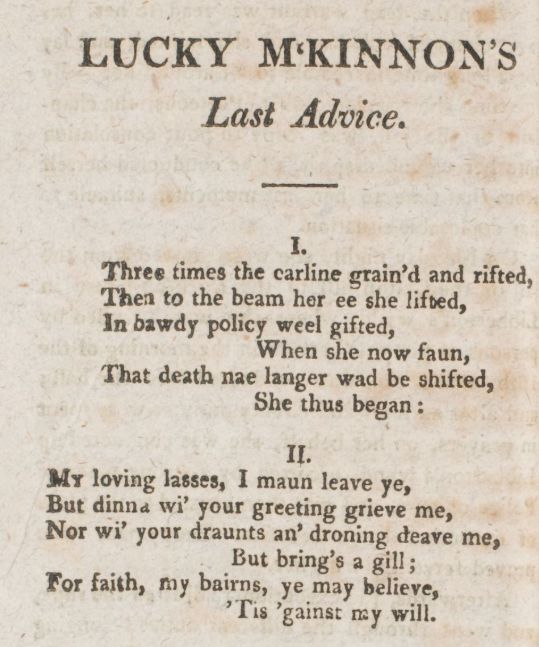 It is only the final stanza that changes to suit the new context:

Whereas Lucky Spence was simply dying, Lucky McKinnon faces the 'Hangie' for her crimes. And fair play to the scribbler of this last stanza for rhuming 'sin in't' with 'Kinnon'!