Besides performances, monuments, and books themselves, there are other items which can tell us something about Ramsay’s legacy. While there is not a great deal of miscellaneous commemorative ‘objects’ on Allan Ramsay (Ramsayana) compared to the likes of Robert Burns (Burnsiana), we can use cultural material to understand the reception of Ramsay nonetheless. As the project develops we will feature certain objects, such as paintings, engravings, and postcards on this site.

Collecting postcards, stamps, prints, bookmarks, trading cards, and cut-outs can be a valuable way of figuring out how popular something used to be. For Ramsay, it seems, his star came into view quite often in the late years of the nineteenth and early years of the twentieth century. In this section of the website we will display some of the fascinating printed material that we have found, offering a glimpse into Ramsay's reception through ephemeral material.

1.  Ramsay on a card for Mitchell's Cigarettes (eBay) 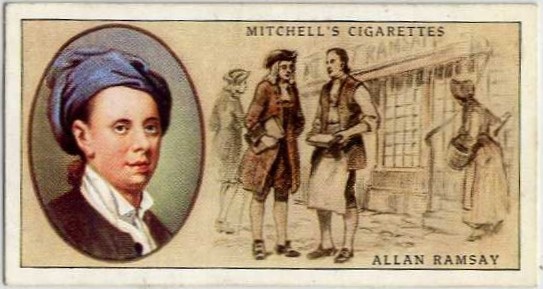 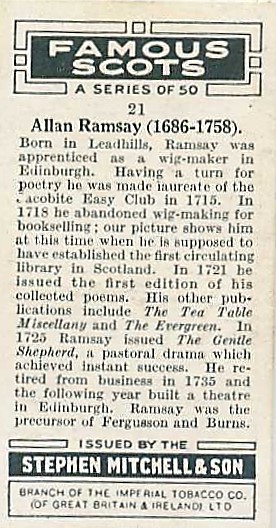 As part of a 'Famous Scots Series' (as Ramsay was quite often found, see here) issued in 1933, along with Rob Roy and Mary, Queen of Scots. In the biography of our poet on the back it says 'our picture shows him at this time when he is supposed to have established the first circulating library in Scotland.' Importantly, the card tells smokers and collectors: 'Ramsay was the precursor of Fergusson and Burns.' 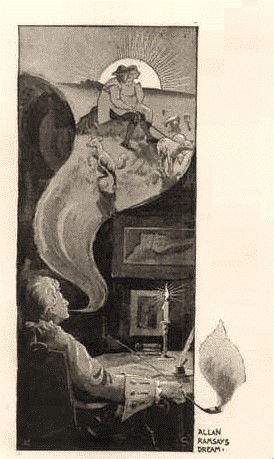 This curious image (created by a Mr. Smith) is in keeping with the above cigarette card. Indeed, it depicts someone (Ramsay?) smoking, and daydreaming about a certain pastoral scene from the comfort of a smoking room. The image was printed in a magazine, The Sketch, on 22 August 1894, apparently reproduced from the cover of a programme of the Inagural Smoking Social held that year at University Hall, Ramsay Lodge. Followers of the story of Ramsay's House on Castle Hill will know that it was developed and extended, partly by Patrick Geddes, and then by the University of Edinburgh as part of their student housing. The article speculates that if Ramsay were 'to come to life again' in his old house he would find himself in 'appreciative company'! 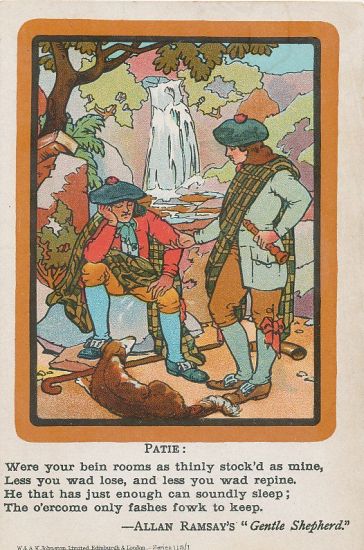 These types of postcards were popular in their day, c. 1920s and 30s. The imprint at the bottom tells us this one was made by the well-known Johnston family of printers in Edinburgh. The exact date is not known, but it is very close in style to another card depicting a scene from Robert Burns's Tam o' Shanter. Here, we have Ramsay's most famous work being depicted, with a scene from Act 1 of the play. This part of the play was printed before The Gentle Shepherd was created, in his Poems (1721), under the title 'Patie and Roger: A Pastoral'. 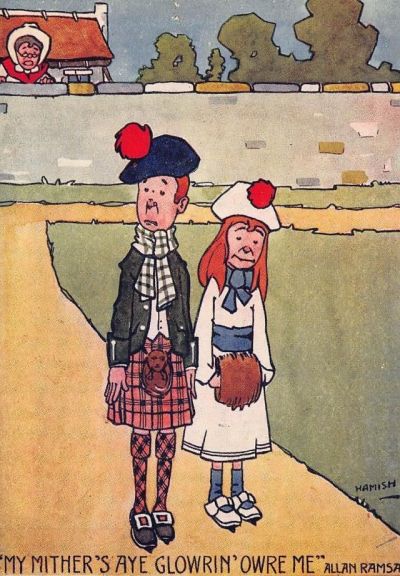 Much like the above, this postcard uses a Ramsay quote to literal and comic effect. The line is found in ‘Katy’s Answer’ [to ‘The Young Laird and Edinburgh Katy’], p. 84 of Ramsay’s Poems (1721). 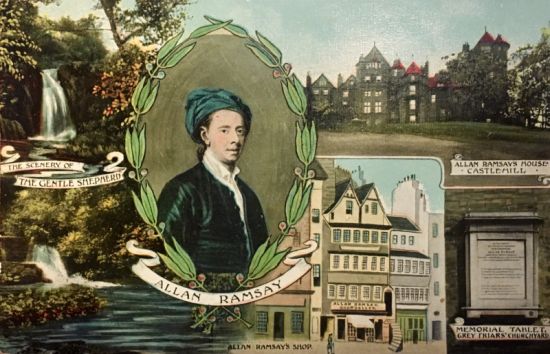 This postcard was produced by Valentine's Co., a lithographic firm established in Dundee in 1825. The reverse simply says 'Souvenir Postcard | Valentine's Series | Printed in Great Britain.' The firm was active until the 1960s with offices throughout the Commonwealth during the early decades of the 20th century. It is estimated that they began to print postcards around 1896, which would ring true of this particular image. We have Ramsay himself in the middle, his portrait dividing 'The Scenery of The Gentle Shepherd' in Penicuik from his established Edinburgh spots. They include his house on Castle Hill, his Memorial Tablet in Greyfriars, and his shop in the High Street. While we cannot be sure of the exact date, we can use the image of the House as a rough estimate (late 19th century, as it appears) and the inclusion of the shop (which was demolished in 1899) to estimate that it was produced c. 1896-99. It cannot be twentieth century, for surely the canny printers would not have sold postcards based on buildings no longer standing!

These sandstone figures depict Symon (right) and Bauldy (left) during a scene from The Gentle Shepherd. 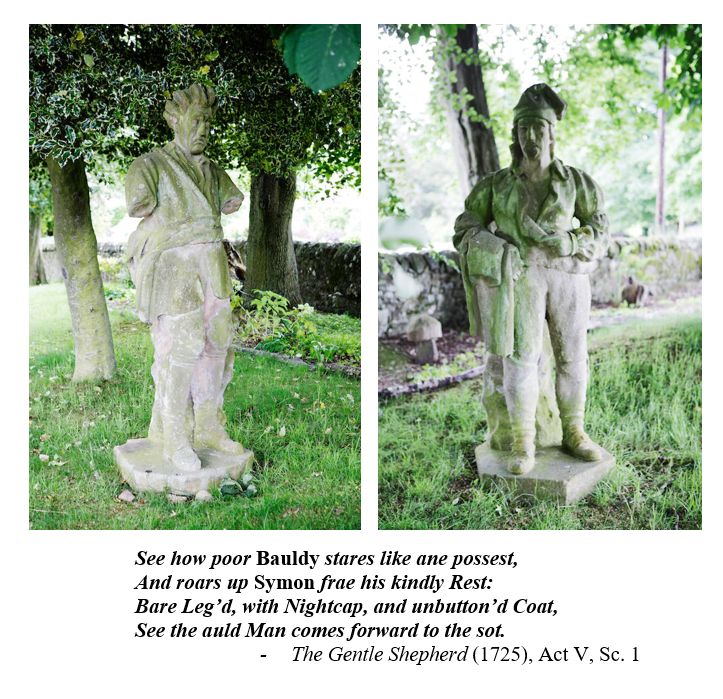 Said to be the work of Scottish sculptor Robert Forrest (1789-1852), this pair shows us yet again the strong legacy of Ramsay's drama, rendered here in the form of scenic garden statues. The sale was withdrawn, but was originally slotted in for auction between £8-12,000, 20 August 2010.

This is a significant edition of Allan Ramsay’s The Gentle Shepherd for many reasons. Though not the first edition of the play under the famous Foulis name, this edition contained 12 numbered aquatint plates depicting the characters and scenery of the work. David Allan, who was trained at the Foulis Academy of Fine Art in Glasgow, went on to become one of the most famous painters of his day. In his Dedication to Gavin Hamilton, another famous eighteenth-century Scottish artist, Allan says:

“[The Gentle Shepherd] it is well known, [Ramsay] composed in the neighbourhood of Pentland hills, a few miles from Edinburgh, where the shepherds to this day sing his songs, and the old people remember him reciting his own verses. I have studied the same characters on the same spot, and I find, that he has drawn faithfully, and with taste, from Nature. This, likewise, has been my model of imitation, and while I attempt in these sketches to express the ideas of the Poet, I have endeavoured to preserve the costume, as nearly as possible, by an exact delineation of such scenes and persons as he actually had in his eye.”

The Mitchell Library copy of this edition contains the same plates, but hand-coloured, and is well worth a look. Later editions of The Gentle Shepherd often made use of these plates, such was their popularity, as with the Adam & Charles Black edition (Edinburgh: 1868).

For sure, they represent an innovative form of art during the period, from the press of a distinguished name in Scotland, by an artist trained at the Glasgow Academy of Fine Art (which was run by Robert and Andrew Foulis simultaneously with their printing press). In terms of Ramsay’s reception they show us that, so often, Ramsay’s most popular production has remained a firm favourite for centuries. 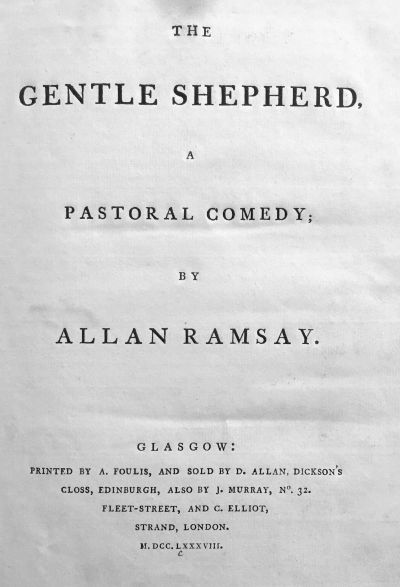 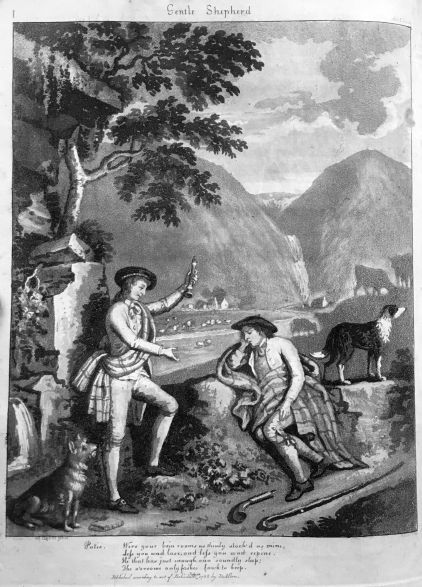 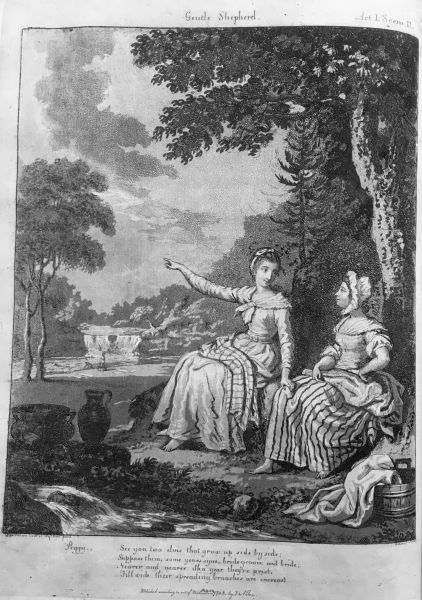 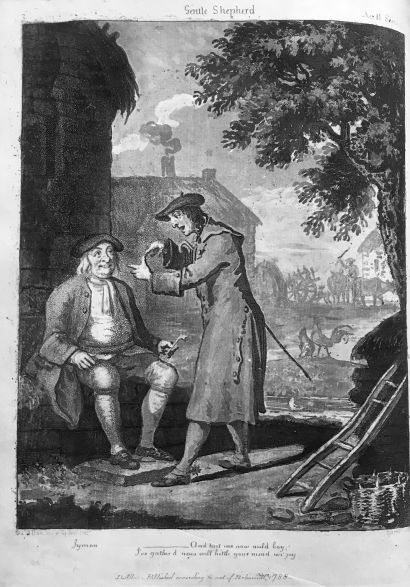 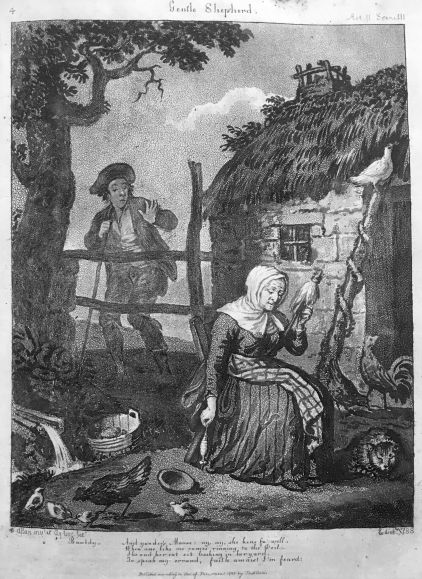 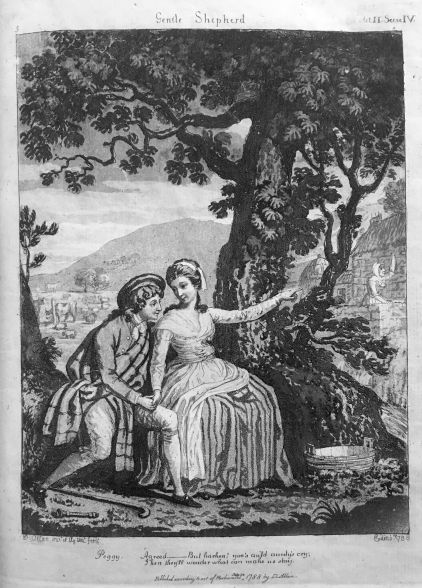 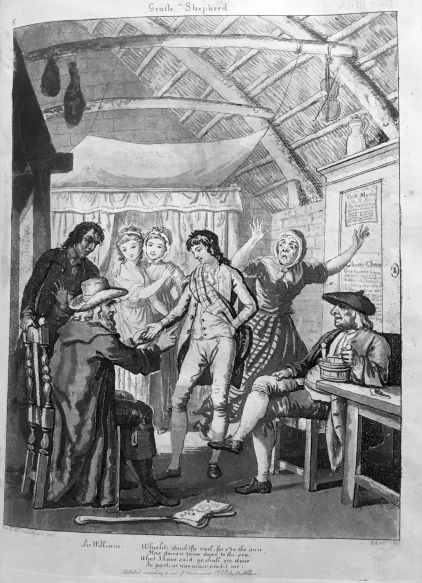 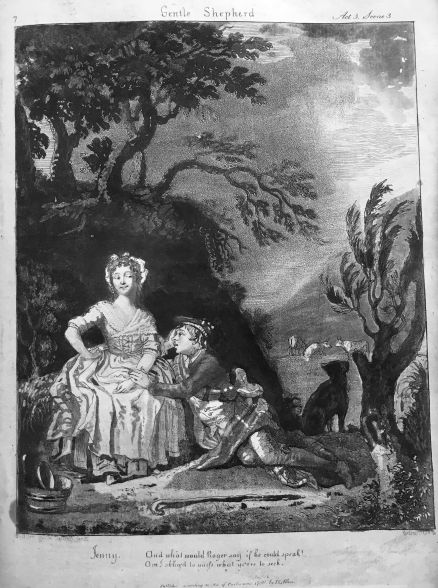 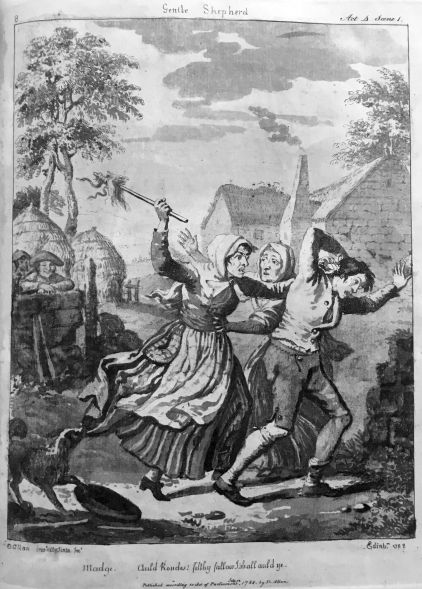 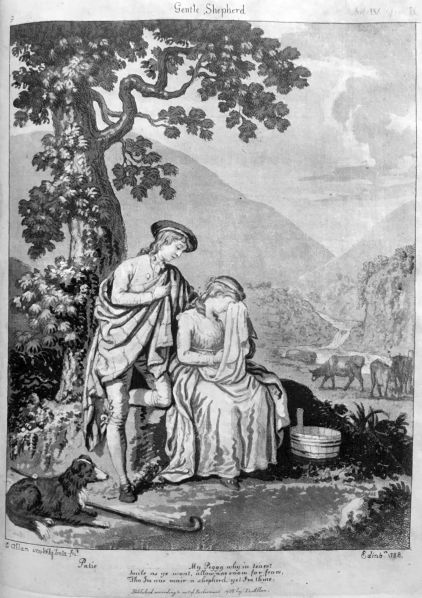 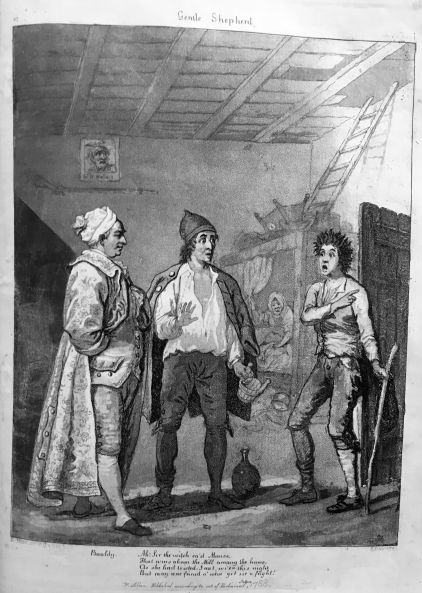 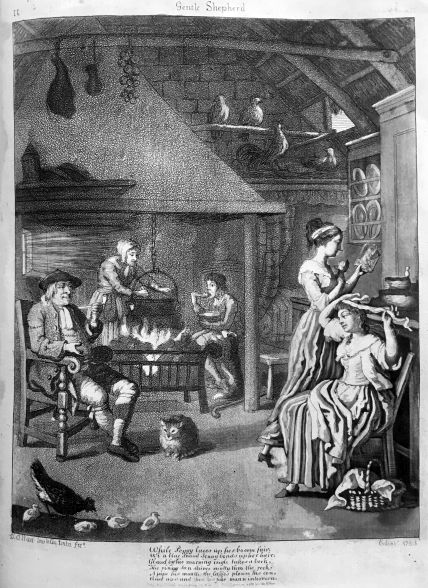 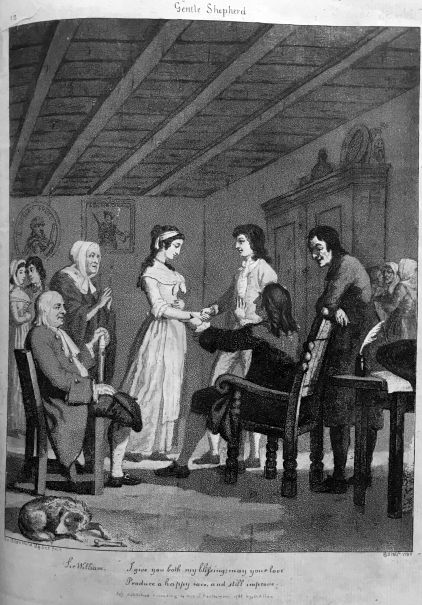 Following David Allan's images for The Gentle Shepherd in the famous Foulis edition of 1788, his scenes were widely recycled. In this instance, we have a cotton textile with brown print (one image is black & white), depciting six scenes from The Gentle Shepherd in a repeat pattern. There are clear similarities between these scenes and the originals by David Allan. Of the twelve Allan plates (1788), this copperplate print reuses Plates 1, 2, 3, 5, 6, and 12. There are variants, most notably regarding the corresponding Plates 6 and 12, where the maker has repositioned the scene of the drama from an interior to a more consistent outdoor setting. Despite this, the composition of the figures is very recognisable, and while we do not know much about the origin of the object, it reaffirms the wide popularity of Allan's rural scenes. The two known surviving prints are held in Philadelphia Museum of Art and Shelburne Museum, Vermont. 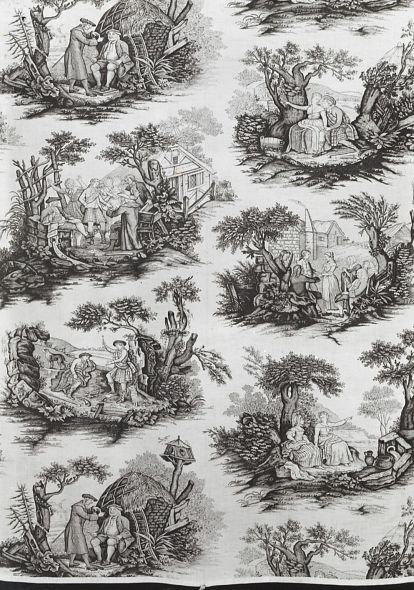 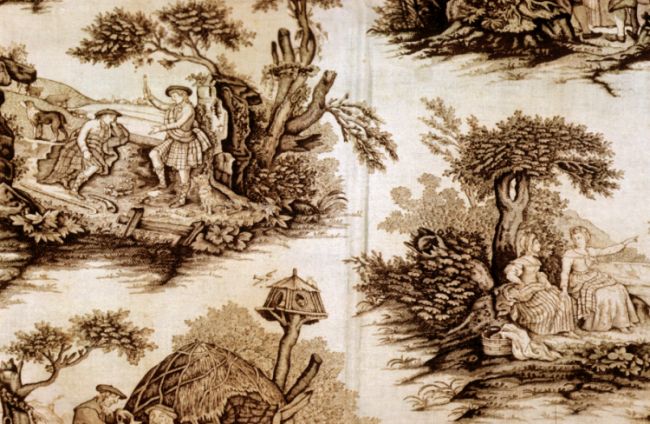 This snuff box from the early nineteenth century shows again the popularity of Ramsay's Gentle Shepherd. It also shows the recyclability of David Allan's artwork: the lid of this piece of Mauchline Ware being an imitation of Plate 8 (see above). 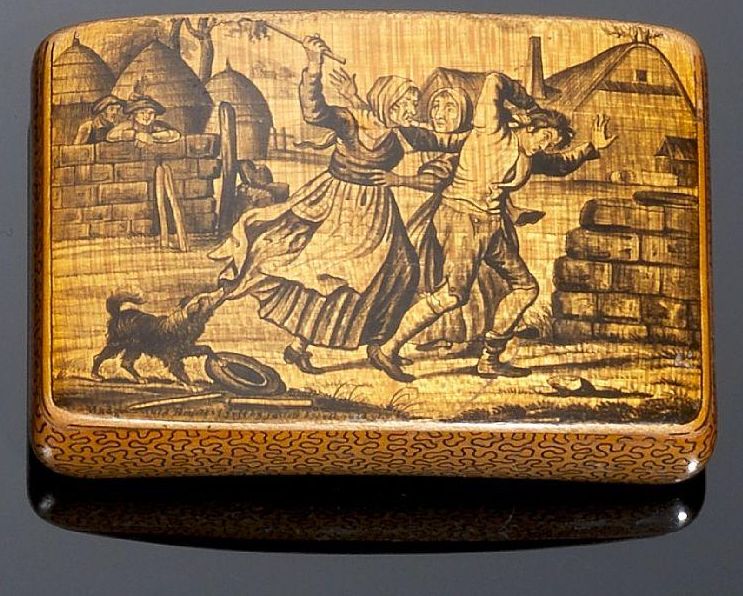 This quaint Mauchline thimble holder features some very appropriate lines by Ramsay (‘The Thimble’) on the lid:

You keep the tend’rest fingers free from pain. 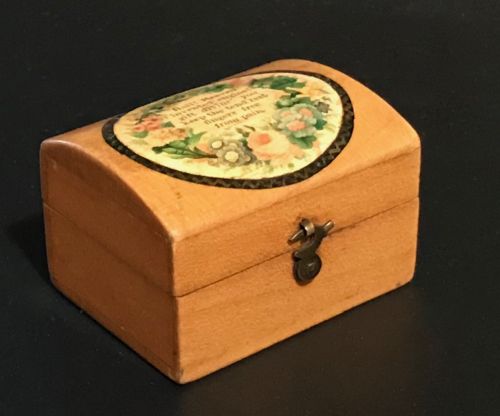 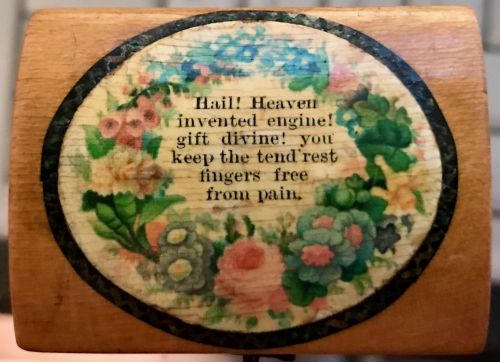 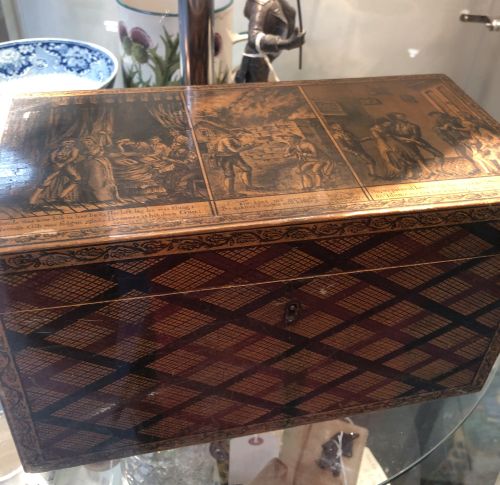 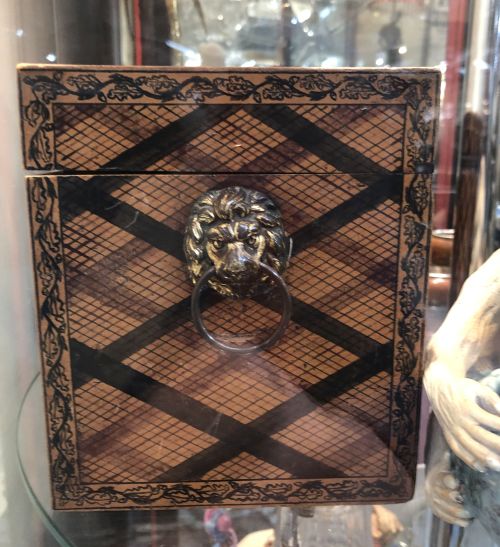 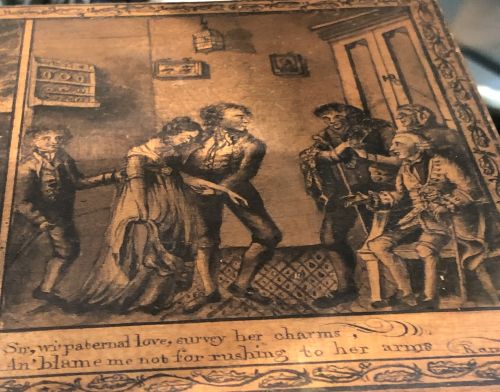 This ornate box features three scenes from The Gentle Shepherd on the lid. The featured scene comes from Act V Scene III:

And blame me not for rushing to her Arms.