On this page the commemorative monuments, plaques, and markers of Ramsay are explored. These permanent fixtures have helped shape the legacy of Ramsay over the centuries, and each one of them tells a different story about the poet and playwright.

This ashlar stone obelisk dedicated to the memory of Ramsay was erected Sir James Clerk, 3rd Baronet. Although the date for Ramsay's inscription is 1759, the date 1756 appears (also in Latin), suggesting the monument was erected before Ramsay's death.* 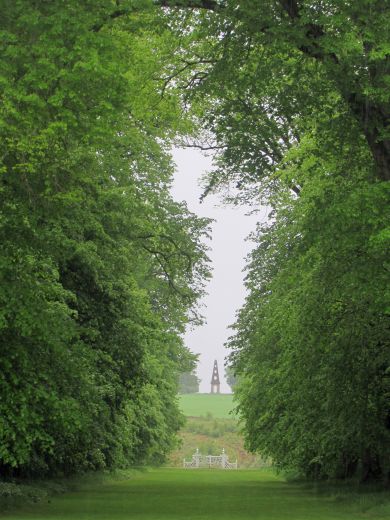 View of the Monument from afar

Sir James's father, Sir John, was the good friend and patron of Ramsay. The obelisk is pierced by oval oculi in a design that harks back to a much earlier period of commemoration. The classical allusions can be traced to the late seventeenth century: there are similarities between the Ramsay obelisk and the steeple of Saint-Louis-en-l'Île Church, Paris (1675), which Sir John might have seen during his visit to Paris in 1697 (cf. Packer). On the inside of the arch, the Latin inscription reads: 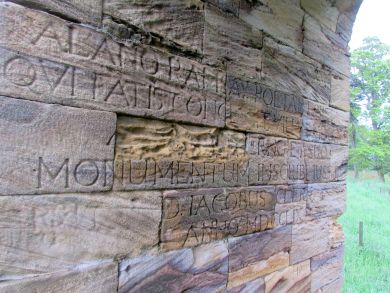 Inside the arch: the Latin inscription

Though it may not have been originally intended to commemorate Ramsay solely, this incredible monument is the first of its kind in terms of Ramsay memorials and remains truly unique in the reception of the poet. 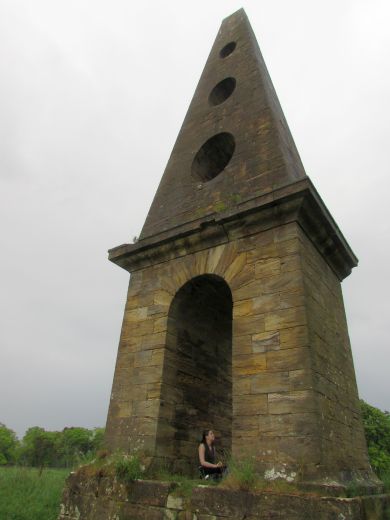 Currently owned by John and Tricia Kennedy, Newhall Estate in the heart of Gentle Shepherd country is adorned with monuments to Ramsay and his best-known work. Originally the site of a monastic house, the lands were named 'New Hall' or 'House' probably in the thirteenth century. It was during the ownership of Sir David Forbes and his son John in the early decades of the eighteenth century that Ramsay became acquainted with the estate and the surrounding area.

The map below (courtesy of Newhall Estate) provides an overview of the key sites in the grounds of Newhall: 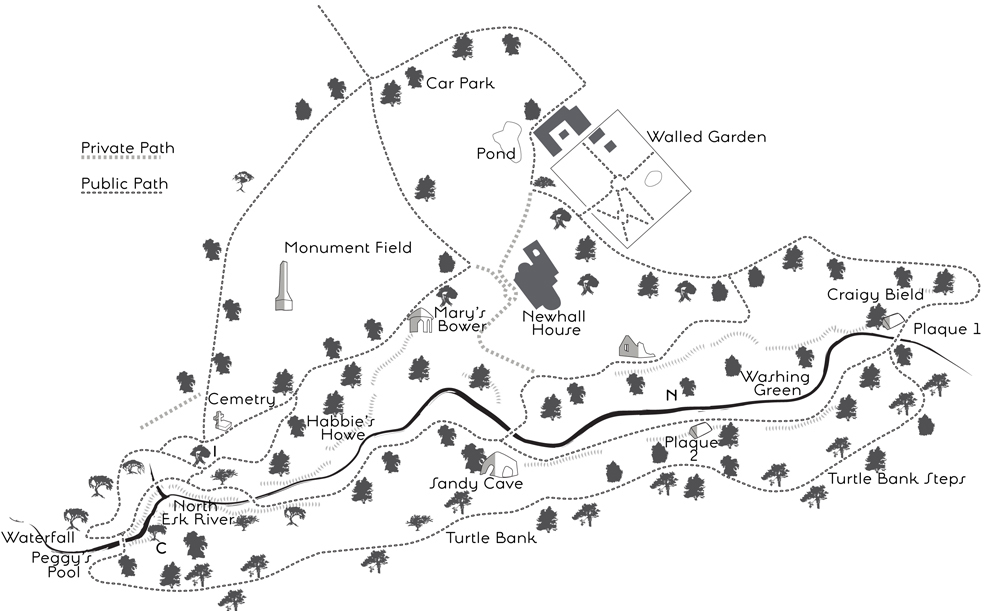 In the recent excursion to the estate by Drs David McGuinness and Brianna Robertson-Kirkland we captured lots of great photos of the Ramsay comemmorations dotted around.

Plaque 1 (pictured below) boasts the opening lines The Gentle Shepherd while Plaque 2 is engraved with lines from Act 1, Scene 2. 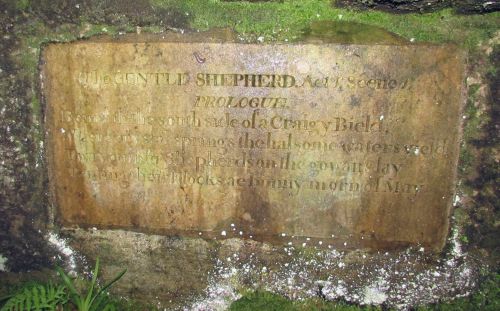 Most significant, perhaps, is the Ramsay Sundial, erected c. 1810. It is not plotted on the map above, but it stands right beside Newhall House itself. 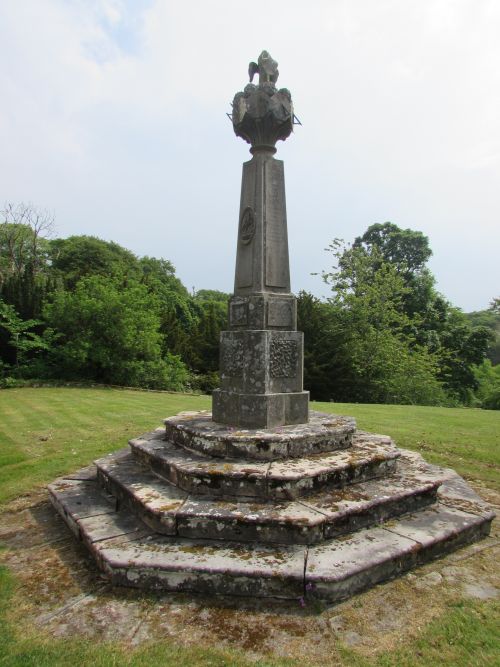 One of the inscriptions reads:

Here ALEXr: PENNECUIK | of NEW HALL, M.D. | is said | to have given | ALLAN RAMSAY | the Plot of | his celebrated | Pastoral Comedy of | THE GENTLE SHEPHERD. 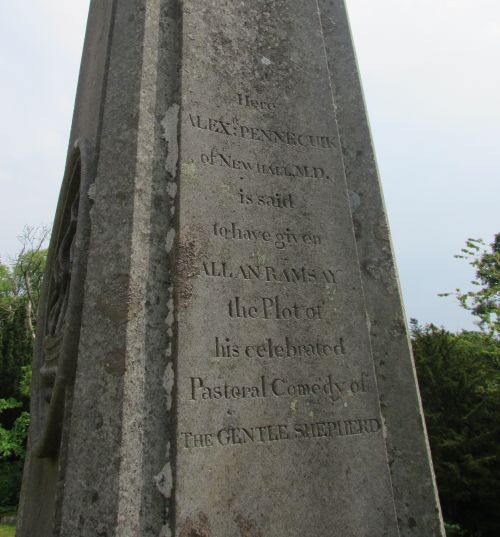 In keeping with the pastoral theme, and nodding also to the music of The Gentle Shepherd, the sculptor adorned this monument with panpipes: 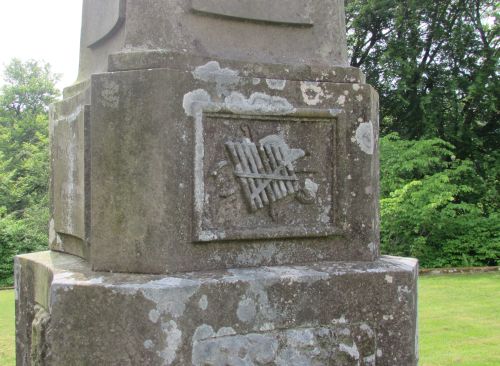 Inside the house we find more evidence of Ramsay's influence. If you find yourself in the ground floor Library, look up: the ceiling is adorned with plasterwork decoration featuring grapes, pipes and crooks. While reminiscent of the instruments featured in Ramsay's drama, these symbols also serve to flank the painting, also on the ceiling, by William Aikman. The painting captures a meeting of the Worthies Club, probably in Leith tavern, of which Ramsay, John Forbes, and Aikman (the painter) were members: 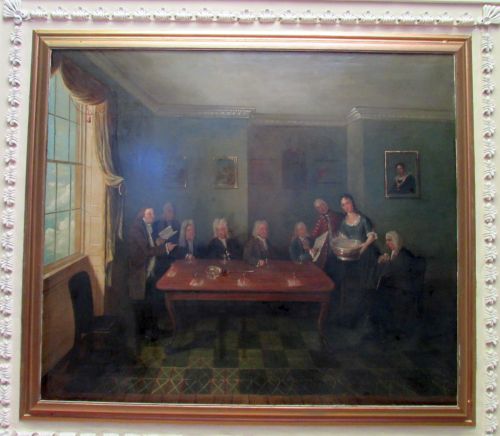 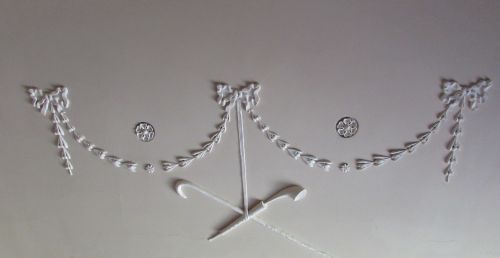 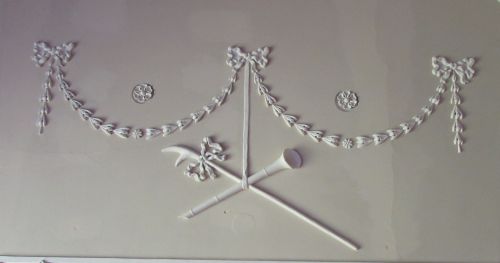 The gardens are also dotted with statues of shepherds and sheperdesses at work, and the naming of the various natural sites after characters from the play give us one of the most impressive areas in Ramsay's reception where commemoration is concerned.

We are very grateful to Mr. and Mrs. Kennedy for their co-operation with us in publishing these images, and for their ongoing preservation and celebration of Allan Ramsay's memory!

Ramsay was buried in Greyfriars kirkyard on 9 January 1759, two days after his death. Greyfriars is the well-known burial ground of many high-profile Scots in the heart of Edinburgh. 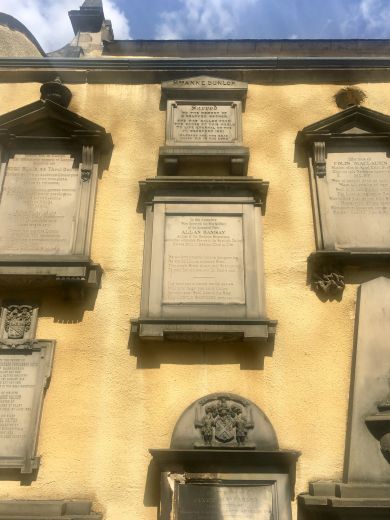 But this memorial stone is a product of the early nineteenth-century, probably around 1820. For more about the immediate reception of Ramsay’s death, see our other pages. It reads:

Was Interred the Mortal Part

of an Immortal Poet.

Author of the GENTLE SHEPHERD.

And other admirable Poems in the Scottish Dialect.

No storied Urn nor animated Bust

To pour her sorrows o'er the Poet's dust.

Tho' here you're buried, worthy ALLAN,

For while your Soul lives in the Sky

Your GENTLE SHEPHERD ne'er can die. 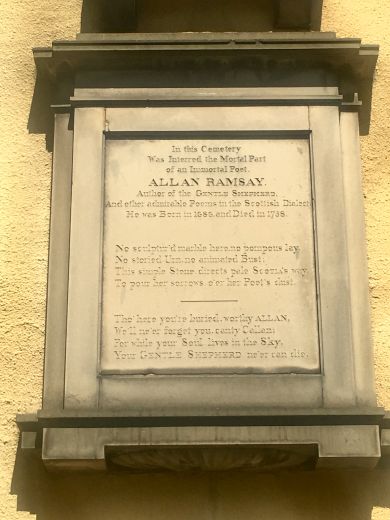 Beneath the dedication to Ramsay the two verses sit together oddly, and with good reason. Firstly, they do not follow the same rhyming pattern. The first verse is ABAB [ie. lay/ Bust/ way/ dust] and the second is AABB [ie. Allan/ Callan/ Sky/ die]. The reason is quite simple: the first verse is actually ‘recycled’ from Robert Burns’s epitaph to Fergusson (1787), which he wrote and had inscribed on Fergusson’s gravestone in the Canongate kirkyard down the road. The second verse was written, clearly, in the years following Burns’s epitaph. The writer, making no effort to emulate Burns, reiterates the immortality of The Gentle Shepherd, already emphasised in the dedication above. A worthy marker for sure, but not as simple as it first seems.

This Gothic structure commemorating Sir Walter Scott is one of the most recongisable Scottish monuments. It is an integral feature of the Edinburgh skyline, and is one of the first objects seen by visitors when they alight Waverley Station, itself named after the writer. 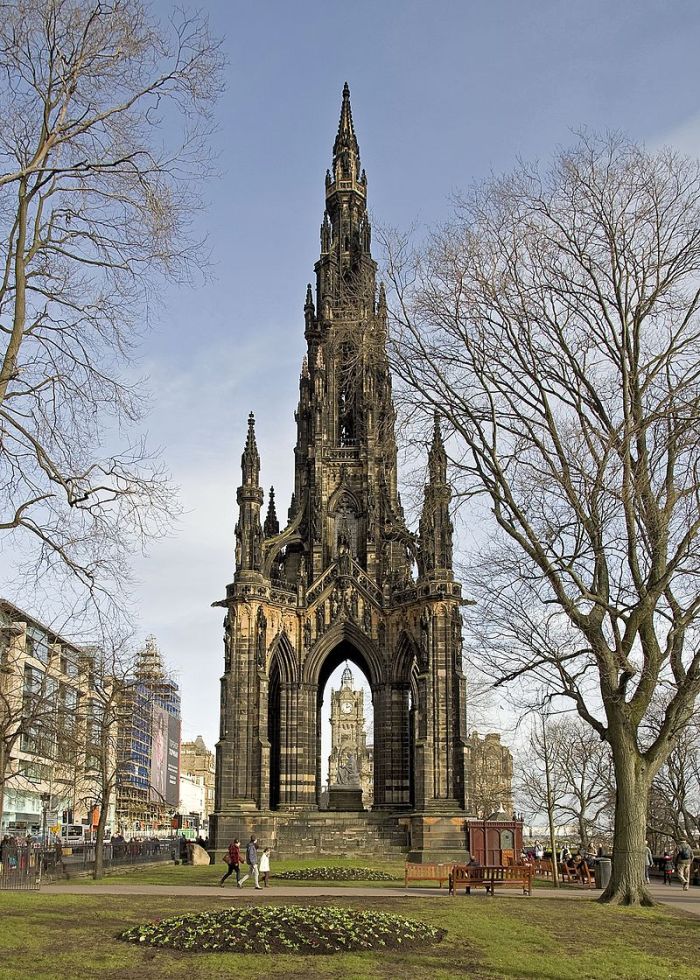 Within Kemp's grand structure there is the statue of Scott by John Steell, who would later go on to design the nearby Ramsay Monument. But the Scott Monument is also interesting for the many figurative statues that are built onto the structure, included characters from Scott's major works and royal Scots. There are also the heads of sixteen Scottish poets (some of them royalty). Ramsay appears among them (below), a reminder of his foundational role in establishing a tradition of Scottish literature which Scott famously helped promote around the globe. 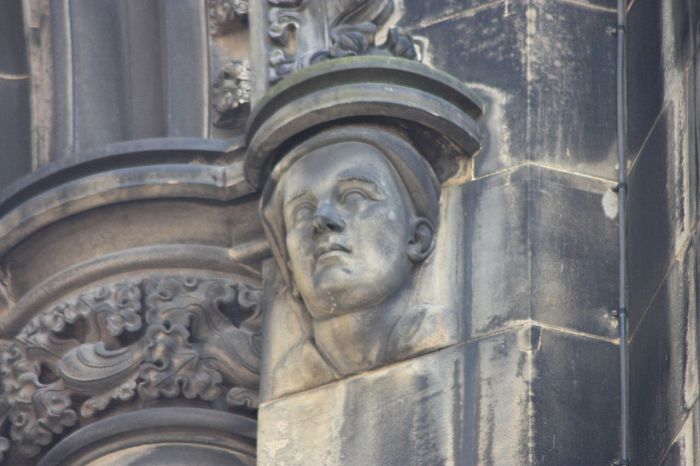 Not the first dedication to Ramsay in Edinburgh, but certainly the most significant. 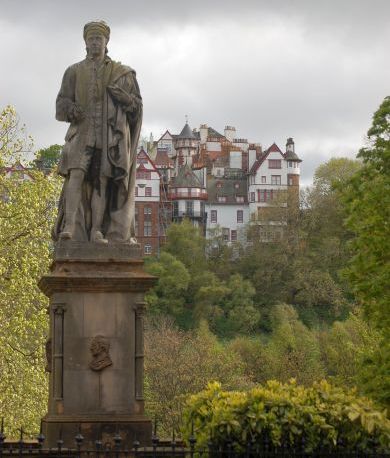 Unveiled to the public on 25 March 1865, this monument to Ramsay furnished Edinburgh with a very fitting memorial. Five years before the unveiling, there was a landslip at the site where the monument was originally intended to be placed: directly in front of the ‘Goose Pie’, Ramsay’s home. In its present location Ramsay is in line with John Wilson (alias ‘Christopher North’) and the Scott Monument (on which Ramsay is also depicted). 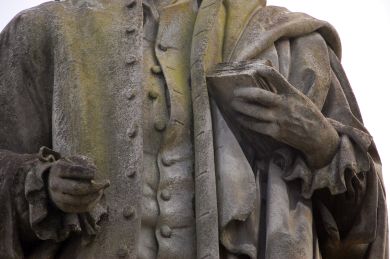 During the 1949 performance of The Gentle Shepherd at the Edinburgh Festival the statue was cleaned and floodlit.

Ramsay in the Wallace Monument (1900)

Ramsay begin to gain national recognition as the nineteenth century progressed, culminating in his role in the Famous Scots Series in 1896. Four years later, a bust of Ramsay was unveiled in the 'Hall of Heroes' within the Wallace Monument in Stirling (both below). 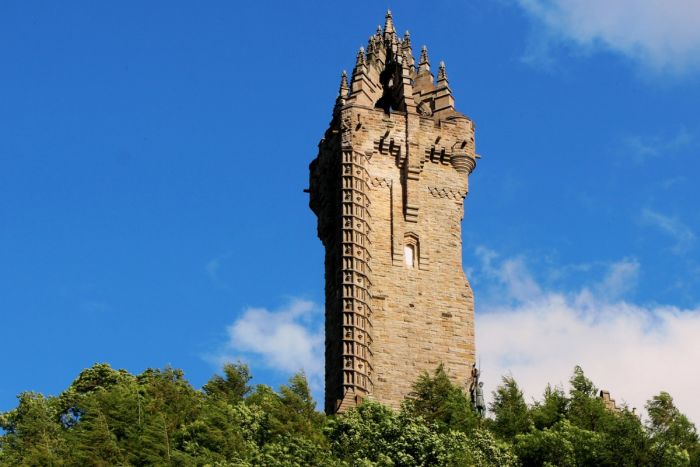 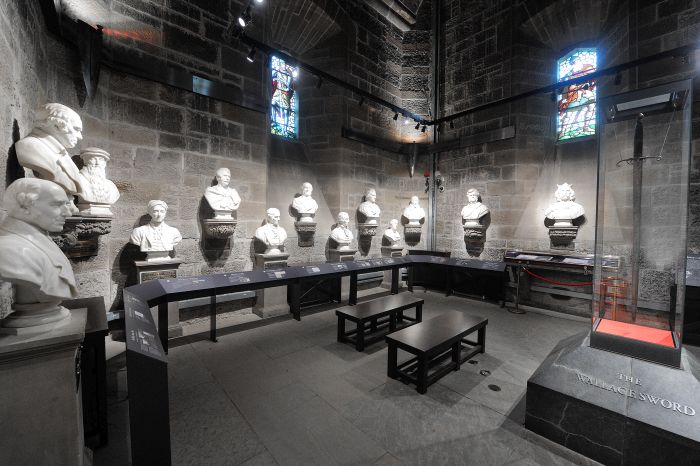 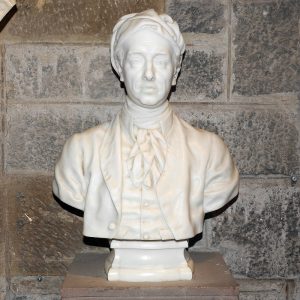 Images from www.nationalwallacemonument.com. Ramsay is fourth from the left.

The unveiling took place on 25 October 1900, placing Ramsay among other national figures such as Robert the Bruce, Scott, Burns, and James Watt. Ramsay's unveiling was marked alongside another bust, that of William Burns - the second Secretary of the Naional Wallace Monument. Himself a scholar, renowned for his two-volume history The Scottish Wars of Independence (1874), Burns and Ramsay bolstered the Hall of Heroes with both poetic and historical memories of Scotland. 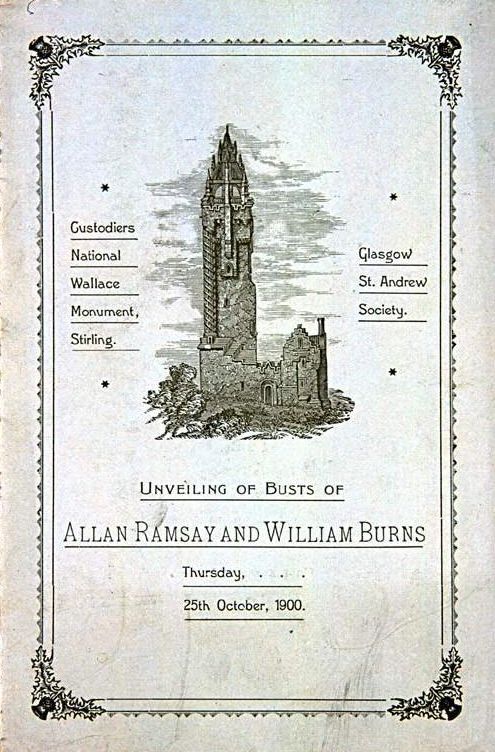 Work on the Usher Hall, Edinburgh, commenced in 1910 and was opened to the public just before World War I. The legacy of the building goes back to 1896, when the successful whisky distiller and blender Andrew Usher II gifted £100,000 to The City of Edinburgh for a new City Hall.

Inside, the building contains dozens of commemorative plasterwork, including portraits of Neil Gow, Bach, Beethoven, Gluck, Verdi and Liszt. Amongst these renowned artists are several figures of Scottish Literature including Fergusson, Burns, Scott and, of course, Ramsay. Both Scott and Ramsay's portraits (now in fine gold) can be seen together in the artist's studio: 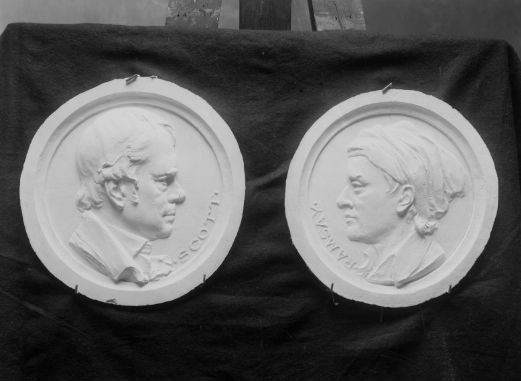 These portraits, by Edinburgh sculptor Henry Gamely, helped to further promote Ramsay's work in a national context. Building on the National Hero status granted to Ramsay in the Wallace Monument and in the Famous Scots Series, Ramsay here enjoys familiar company in one of Edinburgh's premium twentieth-century venues.