The detection of gravitational waves in September 2015 marked the end of the decades-long quest to prove their existence. It also marked the beginning of a new era of astronomy, with gravitational wave observation providing a completely new perspective on the universe. Glasgow scientists have been central in getting to this point, and they're excited about what the future holds.

What are gravitational waves?

Hypothesised by Albert Einstein a century ago, gravitational waves are oscillations in the fabric of spacetime, moving at the speed of light and caused by the acceleration of massive objects.

Gravitational waves carry unique information about the origins of our universe. Studying them provides important insights into black holes, supernovae, gamma-ray bursts, and neutron stars. Even for colossal cosmic events such as the collision of two black holes, the fluctuations in spacetime are tiny by the time they arrive at Earth.

How are they detected?

Gravitational waves were directly detected for the first time only in September 2015 by the ground-based Laser Interferometer Gravitational-Wave Observatory (LIGO).

At each observatory, the two-and-a-half-mile (4km) long L-shaped LIGO interferometer uses laser light split into two beams that travel back and forth down the arms (four-foot diameter tubes kept under a near-perfect vacuum). The beams are used to monitor the distance between mirrors precisely positioned at the ends of the arms. According to Einstein’s theory, the distance between the mirrors will change by an infinitesimal amount when a gravitational wave passes by the detector.

A new age of astronomy

A new age of astronomy

The Institute for Gravitational Research led on the conception, development, construction and installation of sensitive mirror suspensions in the heart of the LIGO detectors, which were crucial to the three detections.

That technology, developed in partnership with the University of Birmingham, the University of Strathclyde, and the STFC Rutherford Appleton Laboratory, was based on Glasgow’s pioneering work for the UK/German GEO600 detector.

Those suspensions rely on delicate 400-micron-wide fibres made from silica. Despite their fragility, each suspension fibre is very strong, capable of holding up to 70kg. In the LIGO detectors, the mirror suspensions hold 40kg mirrors and keep them from being interfered with any outside force or vibration except for gravitational waves.

The mirrors are held so still by the suspensions that the LIGO detectors can detect movements caused by gravitational waves close to one-ten-thousandth the diameter of a proton.

A pioneering role in LIGO

“Alongside Professor Ronald Drever, I was involved in building early gravitational wave detectors here in Glasgow, which monitored outputs from piezoelectric transducers attached to aluminium bars," he says. "We thought it would take us about a year to make an initial detection, and in 1972, we found what looked very much like evidence of gravitational waves. However, since no other detectors were operating at the same time, we weren’t able to verify our observation. Nonetheless, that finding convinced me that we would one day find the evidence we were looking for. 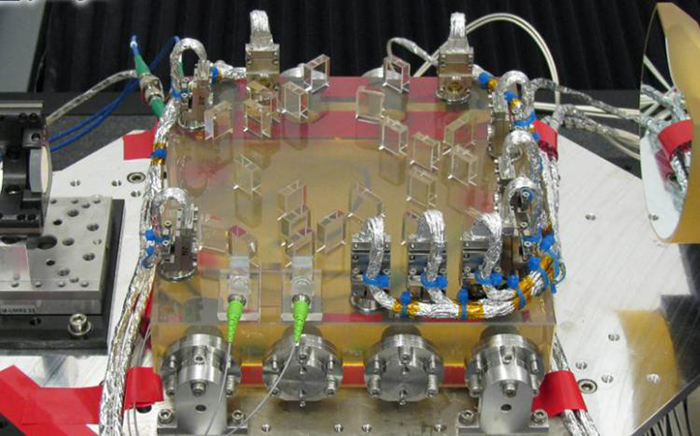 The Flight Optical Bench ready for integration into the LISA Pathfinder Technology Package.

Alongside their success in the ground-based LIGO detection, Glasgow scientists play a crucial role in the development of a space-based gravitational wave observatory.

The first phase of this mission, LISA Pathfinder, was designed to demonstrate key technologies needed to build such an observatory.

To detect these events and fully exploit the new field of gravitational astronomy, it is crucial to open access to gravitational waves at low frequencies between 0.1mHz and 1Hz. This requires measuring tiny fluctuations in distance between objects placed millions of kilometres apart, something that can only be achieved in space. An observatory in space also has the bonus of being free of the seismic, thermal and terrestrial gravity noises that limit ground-based detectors.

LISA Pathfinder was launched on 3 December 2015, reaching its operational orbit roughly 1.5 million km from Earth towards the Sun in late January 2016.

A crucial aspect of the mission was placing two test masses in freefall, monitoring their relative positions as they move under the effect of gravity alone. Even in space this is very difficult, as several forces, including the solar wind and pressure from sunlight, continually disturb the cubes and the spacecraft.

Thus, in LISA Pathfinder, a pair of identical 2kg, 46mm gold–platinum cubes, 38cm apart, fly surrounded but untouched by a spacecraft whose job is to shield them from external influences, adjusting its position constantly to avoid hitting them.

Results from only two months of science operations showed that the two cubes at the heart of the spacecraft are falling freely through space under the influence of gravity alone, unperturbed by other external forces, to a precision more than five times better than originally required.

The demonstration of the mission’s key technologies opens the door to the development of a large space observatory capable of detecting gravitational waves emanating from a wide range of exotic objects in the universe.

Our scientists developed, built, and tested the incredibly sensitive optical bench interferometer that lies at the heart of the LISA Pathfinder. This instrument is capable of detecting changes in distance between the test masses as small as 10 picometres, or one hundred millionth of a millimetre.

Dr Harry Ward described the results as “a spectacular success,” which effectively gave the green light to embarking on the next stage – “to fly a spaceborne gravitational wave detector”. He said: "We want to detect super-massive black hole coalescences when galaxies collide but to do that we had first to prove you can make the super-sensitive measurements – and we have now done exactly that."

The launch marks the end of a decade of work for the team from the IGR. They are now utilising the experience to develop and prototype aspects of the optical metrology for the next phase of eLISA.

The Flight Optical Bench ready for integration into the LISA Pathfinder Technology Package.