A small revolution in gravity imaging

A technology used to create images using gravity is being radically transformed by Glasgow scientists.

Gravimeters are used for measuring small density variations underground. It means you’ll get a different measurement above an underground cavern when compared to reading above a large mineral deposit. If you know what these varying measurements are likely to signify, you've got a good idea of what's below. For this reason, gravimeters are highly valuable in fields such as energy, civil engineering, defence and environmental monitoring.

Until now, all gravimeters have been both costly and bulky. This restricted the application of gravimeters, both in terms of who could afford to use them and where they could be located.

A new type of gravimeter

Glasgow scientists have found a way to adapt a system often found in smartphones to create a cheap and lightweight gravimeter. They have adapted cheap, widely available technology to make a small but powerful gravimeter for the first time.

This microelectromechanical system (MEMS) gravimeter is being developed at the Institute for Gravitational Research, in collaboration with the James Watt Nanofabrication Centre.

The team’s new device, which they have named "Wee-g", uses the same cheap, mass-producible MEMS which are used in smartphones’ internal accelerometers.

While the MEMS technology in phones uses relatively stiff and insensitive springs to maintain the orientation of the screen relative to the Earth, Wee-g employs a silicon spring ten times thinner than a human hair. This allows Wee-g’s 12mm-square sensor to detect very small changes in gravity.

One of the device developers was Dr Richard Middlemiss. “Wee-g opens up the possibility of making gravity measurement a much more realistic proposition for all kinds of industries," he says. "Gravity surveys for geophysical exploration could be carried out with drones instead of planes; and networks of MEMS gravimeters could be placed around volcanoes to monitor the intrusion of magma that occurs before an eruption – acting as an early warning system." 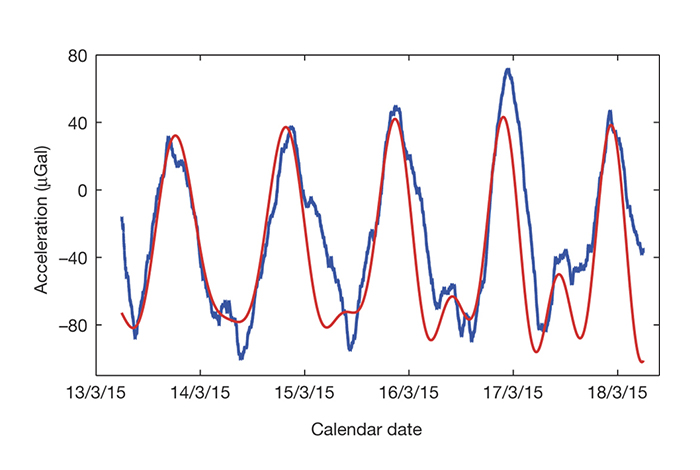 The measurements of the Earth tides obtained from the MEMS device. 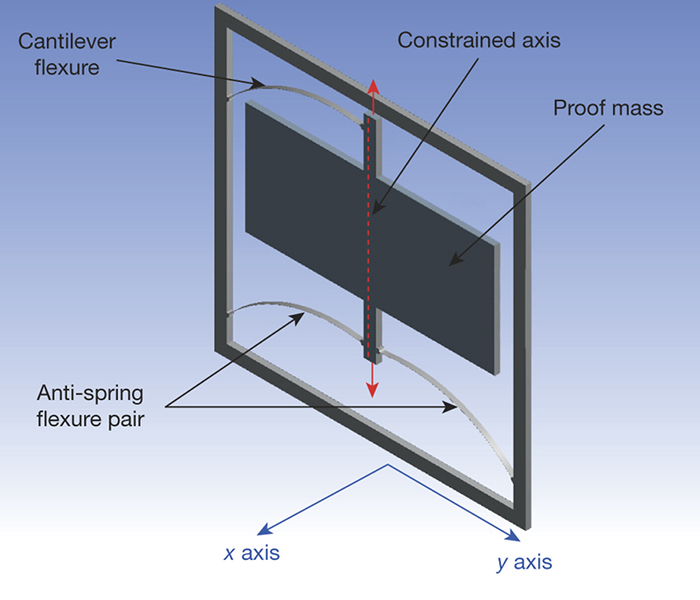 Design of the MEMS gravimeter.

When an accelerometer becomes a gravimeter

The team used their device to measure the Earth tides. Many people are familiar with the idea that the gravitational pull of the moon affects the tides of the planet’s seas and oceans, but the moon and the sun also exert a subtle effect on the Earth’s crust, an effect known as the "Earth tides". The pull of the sun and the moon displace the crust, creating a very slight expansion and contraction of the planet.

This measurement is a standard for a device to be a gravimeter. The group revealed their results in a paper published in the journal Nature (March 2016). This led to "Wee-G" being declared one of the top ten breakthroughs in physics of 2016 by Physics World.

Professor Giles Hammond was part of the team who conceived and developed the device.

“The Earth tides are a well-established phenomenon, which we’re able to accurately predict using mathematical models," he says. “One of the factors which separates gravimeters from simple accelerometers is stability, allowing users to monitor variations in gravity over the course of several days/weeks. We used our Wee-g system to monitor the Earth tides under Glasgow over the course of several days, and our results aligned perfectly with the variations in gravity the model had predicted.

“The significance of this is two-fold: firstly, we’ve shown that a MEMS device can maintain its stability over a long period of time, and secondly, that a device which could easily be built using existing mass-production technology can act as a very accurate gravimeter.”

Working towards a commercial device

The team are now working on the device within QuantIC, the Glasgow-led Quantum Imaging Hub. Dr Middlemiss says: "We're currently working to make the device smaller and more portable and via QuantIC we're building industrial partnerships within several sectors to exploit the device commercially."

The first trials of a portable field version of Wee-G have taken place and in December 2016 the device recorded a 7.7 magnitude earthquake in Chile.

The measurements of the Earth tides obtained from the MEMS device.

Design of the MEMS gravimeter.

Dr Richard Middlemiss and Professor Giles Hammond describe the 'Wee-G' gravimeter and its measurement of the earth tides.