Dating volcanic eruptions from the ‘Age of Discovery’

‌A new study led by Katie Preece and Darren Mark has revealed that the British island of Ascension is an active volcano. The study, published in Geology, used 40Ar/39Ar dating to reveal that the last eruption on the island occurred just over 500 years ago, shortly before the island was discovered. In addition, these ages are the youngest ever produced using the 40Ar/39Ar technique, and therefore offer new prospects for dating young volcanic rocks worldwide; crucial for volcanic hazard assessment. 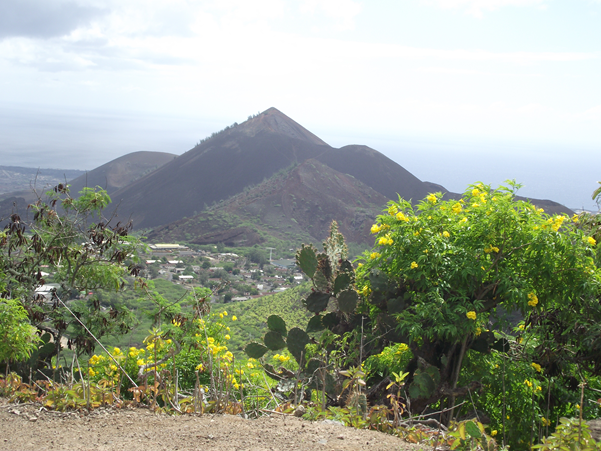 Ascension Island is a British Overseas Territory in the South Atlantic, discovered by Portuguese explorers during the ‘Age of Discovery’ in 1501, and first colonised in 1815. Ascension is an entirely volcanic island, and although many of its lava flows look young, the date of last eruption and therefore whether or not Ascension should be considered an active volcano was unknown. Although there are currently no signs of volcanic activity occurring on the island, volcanologists class an “active” volcano as one which erupted within approximately the last 10,000 years.

As part of a larger Leverhulme-funded research project looking at the geology of Ascension, the team from SUERC, University of East Anglia, Durham University and British Geological Survey targeted the youngest-looking lava flows for dating via the 40Ar/39Ar technique to determine when they erupted. The 40Ar/39Ar analyses, carried out in the Argon Isotope Facility (SUERC), revealed that the eruptions occurred just over 500 years ago, coinciding with the increase of chronicled observations of travel associated with the early modern European ‘Age of Discovery’ (early 15th to 17th centuries). Throughout this period, Ascension was frequently used by sailors as a stopping place to take on provisions, and during this time the sailors wrote many accounts of the island. The team searched these historical records for eye-witness accounts of an eruption. Although the fresh nature of the lava is frequently detailed, as well as a description of fumarolic activity, no mention of an eruption was found in the records, supporting the 40Ar/39Ar data in the conclusion that the last eruption took place not long before the island’s discovery. These data demonstrate that 40Ar/39Ar dating can be employed to bridge the gap between these historical accounts and the geological record.

Globally, >11% of humans live within 100km of a volcano that has been active within the past 10,000 years. This geographical association of people with active volcanoes means it is critical to develop methods to elucidate complete volcanic eruptive histories. However, of the 1325 terrestrial volcanoes that erupted during the Holocene, 40 % currently have unknown ages for their most recent eruptions.  The results of this study offer new prospects for dating young volcanic eruptions globally, essential for hazards assessments as well as for understanding evolution and magmatism in any tectonic setting. Ages for young lava flows will markedly improve our knowledge of volcanic activity by providing temporal data for recent eruptions, a critical component for reliable volcanic hazard assessment.