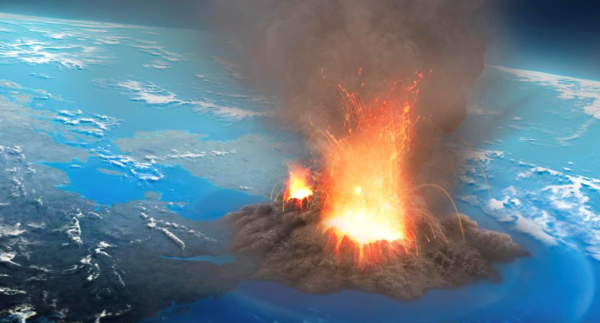 The islands of the Inner Hebrides are well-known for their igneous rocks that reveal the existence of volcanoes in NW Scotland over 55 million years ago.  Hitherto though, the volcanic activity was mostly thought to be relatively quiescent effusive activity from volcanoes that produced basaltic lavas similar to those of Hawaii today.  However, writing in the journal Scientific Reports an international group of scientists from Uppsala, Durham, Oxford, St. Andrews, Cape Town and including SUERC’s Rob Ellam have published evidence of a major explosive eruption.

The evidence rests on geochemical similarity between volcanic horizons on the Island of Eigg and Òigh-sgeir, a group of rocky islets c. 8 Km SW of Canna and some 30 km from Eigg.  The implication is that there was a major explosive eruption about 58 Ma ago and the group suggest that it originated on the Isle of Skye.  The eruption age is not dissimilar, though not identical, to the Palaeocene-Eocene Thermal Maximum (56 Ma) which was a period of elevated atmospheric CO2 associated with significant mass extinction.  So, the research team speculate that eruptions in Scotland may have contributed to conditioning the Earth for this major climate event.