NERC-funded research project. Testing the ‘megadrought’ hypothesis and its implications for human evolution. 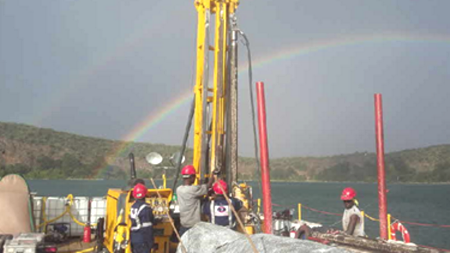 Over the last 25,000 years, East African climate has responded to changes in the Earth's orbit (mainly precession) that influence long-term variations in monsoonal rainfall and the migration of the intertropical convergence zone. But climate of earlier periods, back to 250,000 years, is less well understood as few continuous high resolution terrestrial records exist. This is a major gap in our understanding of equatorial climate from a region critical to the evolution of our own species.

The African megadrought hypothesis states that droughts lasting many thousands of years occurred during the last interglacial (130,000 to 80,000 years ago) across tropical Africa. From the few sites investigated that contain evidence, they are thought to be of a severity greater than any droughts of succeeding time periods, and had major implications for evolutionary processes, for example continent wide migrations in Homo sapiens.

Such long and intensely dry events in the history of African climate are an unexpected phenomenon, and their precise timing, origin and extent, has yet to be established. We hypothesise that megadroughts arose due to monsoon failure caused by changes in the shape of earth's orbit around the sun (the ~100,000 year eccentricity cycle), amplifying changes in the seasonal distribution of solar radiation (the ~21,000 year precession cycle).

The project focuses on the sedimentary record from Lake Challa, a deep lake on the flank of Kilimanjaro. Unlike other studies from East Africa, the easterly position of Lake Challa places it beyond the direct influence of the Atlantic climate system, thus removing this aspect as a possible forcing and allowing us to isolate a record of monsoonal variation.

The outstanding potential of these lake sediments to provide a long, sensitive repository of environmental change data has been established by a prior study of the last 25,000 years, that resulted in multi-disciplinary articles in 'Nature' on orbital forcing of climate, 'Science' on the laminated sediments and relation to ENSO, and 'Geology' concerning the seasonality of climate variations and the Kilimanjaro ice core. Additional data sets (published in other journals) confirm that the environmental proxies and dating methods proposed here will deliver a high quality record from this lake.

The age of the deeper sediments has been estimated from seismic profiles of the sedimentary layers in the lake; new, absolute dates are required to identify the basal sediment age and rates of subsequent sedimentation.

This project will lead in modelling of sediment ages from the new, deep cores through radiocarbon dates, palaeomagnetism to detect the presence of well-dated magnetic reversals and dating of volcanic ash layers through Ar/Ar dating and chemical correlation. Carbon and oxygen isotope data from diatom silica are excellent tools to reveal the megadroughts due to their sensitivity to humid/arid shifts as already demonstrated during the last 25,000 years.

This project is part of an international consortium, partly funded by the International Continental scientific Drilling Program to recover cores from the lake.