The origin of the Acheulean 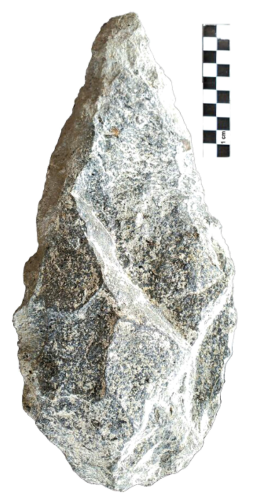 New research led by SUERC and Instituto de Evolución en África presents a technological study and evidence of the use of these tools on the butchery and consumption of fauna, probably by early Homo erectus sensu lato (Nature Scientific Reports, December 2015).

The appearance of the Acheulean is one of the hallmarks of human evolution. It represents the emergence of a complex behavior, expressed in the recurrent manufacture of large-sized tools, with standardized forms, implying more advance forethought and planning by hominins than those required by the precedent Oldowan technology. The earliest known evidence of this technology dates back to c. 1.7 Ma. and is limited to two sites (Kokiselei [Kenya] and Konso [Ethiopia]), both of which lack functionally-associated fauna. The functionality of these earliest Acheulean assemblages remains unknown.

Dr. Mark (SUERC) in collaboration with scientists from across Spain presents the discovery of another early Acheulean site also dating to c. 1.7 Ma from Olduvai Gorge. This site provides evidence of the earliest steps in developing the Acheulean technology and is the oldest Acheulean site in which stone tools occur spatially and functionally associated with the exploitation of fauna. Simple and elaborate large-cutting tools (LCT) and bifacial handaxes co-exist at FLK West, showing that complex cognition was present from the earliest stages of the Acheulean.