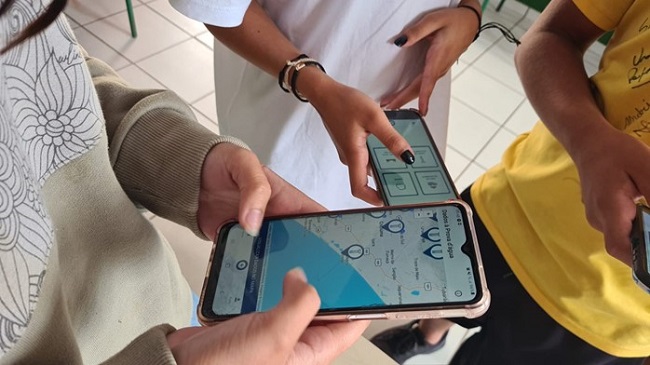 Vulnerable communities around the world could soon be able to use a new mobile phone app to help prevent disastrous floods thanks to a South American ‘citizen science’ pilot.

The new app which is launched today is one of the key developments of the Waterproofing Data Project, created in partnership with researchers at the University of Glasgow and the University of Warwick in the UK; Heidelberg University in Germany, along with the National Centre for Monitoring Natural Disasters Alerts (Cemaden) and the Getulio Vargas Foundation in Brazil.

The Waterproofing Data app – Dados à Prova D’Água – has been tested by teachers, students, Civil Defence agents and residents in more than 20 local municipalities in Brazil.

While developed in Brazil, the research team hope to roll out this model globally to engage citizens around the world to generate flooding and rainfall data in their own countries that can be used to tackle the global climate crisis.

The app came out of a collaborative design process where community members actively shaped how the app works. It creates a ‘citizen scientist’ monitoring network by enabling them to generate data about rainfall and local flood impacts while showing them a visualisation of all the data, including those from official sources.

Professor João Porto de Albuquerque, Deputy Director of the Urban Big Data Centre, University of Glasgow, and project lead, said: "The Waterproofing Data project reached a milestone today with the release of a mobile application and school model curriculum, after successfully testing them with more than 300 school students and professionals working in civil protection in nine cities in Brazil.

“The mobile app draws on research results obtained by a transdisciplinary international research team in Brazil, Germany and the UK in co-production with flood-prone communities and institutional stakeholders in Brazil. It will enable schools and communities throughout Brazil to work with our partners at Cemaden (the National Centre for Disaster Monitoring and Early-Warning) to combine citizen science and urban analytics to adapt to climate extreme events and prevent the devastating impacts of flooding which have happened year after year in Brazil.”

The research also discovered clear educational benefits to young people in at-risk communities. Students learnt how to make rainfall gauges with plastic bottles and to use the Waterproofing Data mobile app to record their rainfall measurements and the impacts on their neighbourhood. They also learnt to use digital mapping tools such as OpenStreetMap. Empowering them to become citizen scientists helped them understand flooding risks and the effect of climate change on their neighbourhoods while also generating valuable data for flood management agencies.

The app and curriculum - initiatives developed in collaboration with the communities at risk - make flood data accessible, raise awareness of flood risks, and encourage participation in the design of new initiatives to reduce disaster risks.

Climate change is causing extreme weather events to become more frequent and more severe, devastating communities with high poverty levels, such as deprived areas of Brazil and Latin America. These neighbourhoods are often more vulnerable to natural hazards due to rapid urbanisation, location within flood-prone areas, and a lack of durable housing, water and sanitation infrastructure, or natural drainage. 8.3 million people in Brazil are estimated to live in these at-risk areas. Lack of sufficient data about rainfall and floods - alongside the varying physical and social characteristics of neighbourhoods - can make it difficult to predict when floods may occur.

Improving the capacity of these communities to cope with these risks can make cities more resilient to extreme weather events and reduce the social and economic impacts of these disasters, which the World Bank estimates have cost Brazil R$ 336 billion (£48 billion) from 1995 to 2019.

The Waterproofing Data (WPD) project explored how to build resilience by encouraging communities to generate the data used to predict when floods will occur.

The Waterproofing Data Project was financially supported by the Belmont Forum and NORFACE Joint Research Programme on Transformations to Sustainability, which is co-funded by DLR/BMBF, ESRC (ES/S006982/1), FAPESP, and the European Commission through Horizon 2020 under grant agreement No 730211. The UKRI GCRF Translation Award project (EP/T015683/1) is a UKRI Collective Fund Award supported by EPSRC and the Global Challenges Research Fund.

The Urban Big Data Centre (UBDC) is a research centre and national data service jointly funded by the University of Glasgow and the Economic and Social Research Council. The Centre promotes the use of big data and innovative research methods to improve social, economic and environmental well-being in cities. UBDC recently launched a new research theme on Urban Sustainability & Participation. This research is led by Professor João Porto de Albuquerque and is concerned with inclusive data innovations for urban sustainability that support climate action and enable progress towards the United Nation’s Sustainable Development Goals (SDGs).