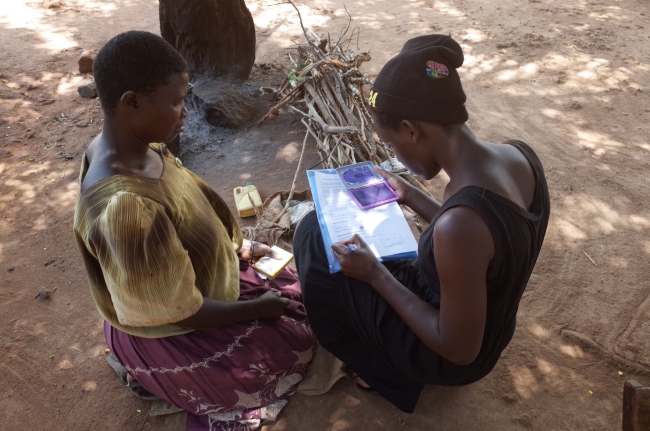 In a new paper published in the journal Proceedings of the National Academy of Sciences, researchers from universities in Scotland and China, working together with the Ministry of Health in Uganda, describe for the first time how origami-style folded paper, prepared with a printer and a hot plate, has helped detect malaria with 98% sensitivity in infected participants from two primary schools in Uganda.

Malaria is one of the world’s leading causes of illness and death, affecting more than 219 million people in 90 countries around the globe, and killing 435,000 people in 2017 alone.

A significant issue for arresting and reversing the spread of the disease is diagnosing it in people who are infected but who do not display any symptoms, a problem which can only be addressed by widespread field tests. However, current tests, which rely on a process known as polymerase chain reaction (PCR), can only be carried out under laboratory conditions, making them unsuited for use in remote locations.

The team, led by researchers from the University of Glasgow in partnership with Shanghai Jiao Tong University and the Ministry of Health in Uganda, have developed a new approach to diagnostics. It uses paper to prepare patient samples for a different type of detection process known as loop-mediated isothermal amplification, or LAMP, which is more portable and better-suited for use in the field.

The origami platform uses a commercially-available printer to coat the paper in patterns made from water-resistant wax, which is then melted on a hotplate, bonding the wax to the paper.

A blood sample taken from a patient via fingerprick is placed on in a channel in the wax, then the paper is folded, directing the sample into a narrow channel and then three small chambers which the LAMP machine uses to test the samples’ DNA for evidence of Plasmodium falciparum, the mosquito-borne parasitic species which causes malaria. The test can be completed on-site in less than 50 minutes.

Professor Jonathan Cooper of the University of Glasgow’s School of Engineering is the paper’s lead author. He said: “We tested our approach with volunteers from two primary schools in the Mayuge and Apac districts in Uganda. We took samples from 67 schoolchildren, under strict ethical approval, and ran diagnostic tests in the field using optical microscopy techniques, the gold standard method in these low-resource settings, a commercial rapid diagnostic procedure known as a lateral flow test and our LAMP approach. We also carried out PCR back in Glasgow, on samples collected in the field.

“Our diagnostic approach correctly diagnosed malaria in 98% of the infected samples we tested, markedly more sensitive than both the microscopy and lateral flow tests, which delivered 86% and 83% respectively.

“It’s a very encouraging result which suggests that our paper-based LAMP diagnostics could help deliver better, faster, more effective testing for malaria infections in areas which are currently underserved by available diagnostic techniques."

Dr Julien Reboud of the University of Glasgow’s School of Engineering played a key role in developing the new diagnostic technique.

Dr Reboud said: “These are challenging environments for any test of this type, with no access to the kinds of refrigeration, special equipment and training that more traditional diagnostic procedures require, so it’s very encouraging that the diagnostic techniques we’ve developed have proven to be so sensitive and reliable.

“With malaria infections on the increase in 13 affected countries according to a World Health Organisation report released last year, it’s vital that new forms of diagnosis reach the people who need them, and we’re committed to developing our approach to paper-based LAMP diagnostics further after this encouraging study.”

The team’s paper, titled ‘Paper-based Microfluidics for Diagnosing Malaria in Low Resource Rural Environments’, is published in PNAS. The research was supported by funding from the UK Global Challenges Research Fund, the Scottish Funding Council, and the Engineering and Physical Sciences Research Council (EPSRC).