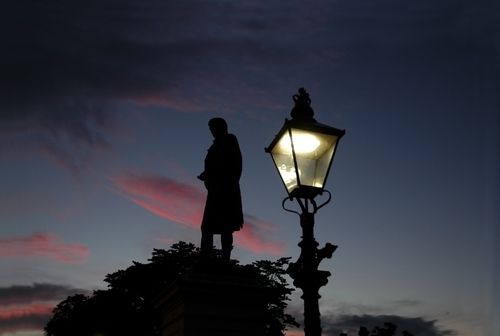 The University of Glasgow will carry out an extensive assessment of the economic value of Robert Burns to Scotland, it was announced today (Monday 14 May 2018)

Professor Murray Pittock of the Centre for Robert Burns Studies at the University will led the research which is being funded by the Scottish Government.

The research will assess how much the worldwide fascination with Scotland’s national bard is supporting Scottish business and jobs.

It will also look at the potential for Burns to further support regional inclusive growth – from hotels and restaurants to food, drink and memorabilia.

While there have been studies of the economic impact of cultural industries before, this is believed to be a world first in carrying out a thorough assessment of the economic value of a global icon.

Professor Pittock, who is a Pro-Vice Principal at the University, said: “Tourism and food and drink are two of the three largest industries in Scotland, which in their turn reflect a highly visible national Scottish brand in the global marketplace, a brand which owes an enormous debt to Scotland’s 18th and 19th century history.

“We need to understand the relationship between our culture and our economy more fully in order to maximise our already world-leading position.”

Within the UK, culture and heritage tourism in Scotland attracts more visitors than anywhere outside London. Robert Burns Birthplace Museum in Alloway is second only to Shakespeare among UK writers’ museums in its visitor numbers.

UofG's @P14Murray will lead research to assess how the worldwide fascination with Scotland’s national bard is supporting #Scottish business and jobs. The research will be funded by @scotgov.

Professor Pittock added: “With up to nine million people now attend Burns Suppers every year across the world and the recent decision by Norwegian Airlines to put his name on the tail fin of one of their planes, the global importance of Burns is established.

“What is important is to know now is the value he brings to the Scotland, and how he can be used to further enhance our economy.”

The research project will run until the summer of 2019, with an interim report ahead of the Burns season in January.

Minister for International Development and Europe Dr Alasdair Allan said: “We are delighted to fund the work that Professor Pittock and colleagues will carry out in assessing the impact of Robert Burns on the Scottish Economy, and particularly how this could be further harnessed to drive inclusive economic growth for Scotland.

“The report team will link to the South of Scotland Economic Partnership, and to the developing Ayrshire Regional Partnership – two areas of Scotland intrinsically linked with Robert Burns – but will also examine the scope for development across the country as a whole.”

The project will be housed in the Centre for Robert. Burns Studies at the University, which has itself attracted some £4 million of external research funding in the last 10 years.

In addition to a report for the Scottish Government, the centre will host a website on the research and a template with recommendations as to how this process could be repeated for other cultural icons, both in Scotland and internationally.

Professor Gerard Carruthers, Co-Director of the Centre for Robert Burns Studies, said: “More than 250 years after his birth, Robert Burns, his life and work, still holds a continued and growing fascination for a worldwide audience.

“Therefore it’s vital to have a well-researched, clear and up-to-date picture of what this looks like in economic terms – for business, tourism and jobs. We are delighted to play our part in this important research.”

Joan McAlpine MSP, who led a debate at Holyrood on the Burns and the Scottish economy, said: “In January this year I was successful in securing a parliamentary debate calling on more attention to be paid to the value of “Burns the Brand” to the Scottish economy. I am absolutely delighted that the Scottish Government have now commissioned quality research on the subject. Professor Pittock was extremely helpful in supplying material for my debate and I congratulate him and his colleagues on securing this funding.

“In my speech for the debate I reminded parliament that a World Bank economist had calculated Robert Burns generated £157 million per annum for Scotland in tourism and merchandising back in 2003. The figure will now be much higher and I am delighted that the University of Glasgow’s more extensive research project will also look at the global value of Burns to Scotland.

“Cultural tourism has enormous potential to create jobs and prosperity, particularly in rural areas such as the south, which I represent. I believe this research will help attract investment into Burns related destinations in places such as Dumfries & Galloway, where the poet lived and died and produced some of his best work, including Tam o’ Shanter.

“My debate generated a great deal of interest so this research from the Centre for Robert Burns Studies will be eagerly anticipated.”

The Centre for Robert Burns Studies is currently working on a 15 year project funded by the Arts and Humanities Research Council called Editing Robert Burns for the 21st century. By 2024, it will have produced a new multi volume edition of his entire work published by Oxford University Press.

For more information please contact Áine Allardyce in the University of Glasgow Communications and Public Affairs Office on 0141 330 7126 or  aine.allardyce@glasgow.ac.uk