A team of scientists have found a new way to transform ambient heat into motion in nanoscale devices – a discovery which could open up new possibilities for data storage, sensors, nanomotors and other applications in the ever-shrinking world of electronics.

In a new paper published today in the journal Nature Materials, an international team of researchers from various institutes including the University of Glasgow and the University of Exeter in the UK, as well as from the ETH Zurich and the Paul Scherrer Institute in Switzerland, describe how they have created a magnetic system capable of extracting thermal energy on the nanoscale, using the concept of a gear known as a ratchet, and turning magnetic energy into the directed rotation of the magnetization. 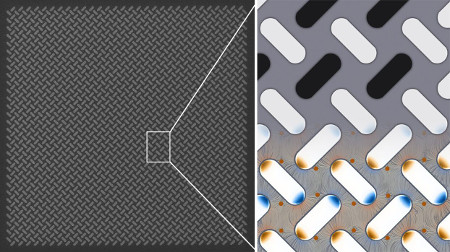 The thermal ratchet was realized in a material known as ‘artificial spin ice’, made of an assembly of tiny nanomagnets of Permalloy, a nickel–iron alloy. The individual nanomagnets are just 470 nanometres long (or about 200 times smaller than the diameter of a human hair) and 170 nanometres wide, with only a single magnetic domain; that is, the magnetisation can only point in one of two directions along the long axis of the magnet. After using an external magnetic field to set the magnetisation in a given direction,, the researchers observed that the magnetisation rotated in only one of two possible directions, without an obvious reason why one way should be preferred over the other.

Sebastian Gliga, the lead author of the study and Marie Curie Research Fellow at the University of Glasgow, recalls: “The system we have studied is an artificial spin ice, a class of geometrically frustrated magnetic materials.

“We were surprised to see that the geometry of the interactions can be tailored to achieve an active material that exhibits dynamic chirality and thus acts as a ratchet.” Chirality means that an object looks different to its mirror image, like our left and right hands. Chirality can also occur in motion: the best-known example is the rattleback, a boat-shaped top that prefers to spin in a single direction.

Professor Robert Stamps from the University of Manitoba (previously at the University of Glasgow) pointed out that it is the properties of the edges of the assembly that determine the thermal ratchet behavior. “We suspected from the beginning that the boundaries would strongly affect the magnetic ordering and the dynamics.”

It was this idea and proposal of the geometry from Prof. Stamps that eventually led to the intriguing behaviour measured by researchers.

The mechanism leading to the observed behavior was not obvious, however, and it is only through numerical modeling that the precise role of the edges became clear. According to Professor Gino Hrkac, second author on the report, from University of Exeter and Royal Society Research Fellow, “We tried to understand for quite some time how the system worked before we realized that the edges created an asymmetric energy potential.” This asymmetry is reflected in the distribution of the magnetic field at the boundaries of the nanomagnet array and causes the magnetization to rotate in a preferred direction.

To image the evolution of the magnetic state of the system, the scientists used x-rays and the so-called x-ray magnetic circular dichroic effect. The measurements were carried out at the synchrotron light source Swiss Light Source at the Paul Scherrer Institute in Switzerland and at the Advanced Light Source, Lawrence Berkeley National Laboratory in the United States.

According to Professor Laura Heyderman of the ETH Zurich and Paul Scherrer Institute: “Artificial spin ice has mainly been used to answer scientific questions, for example concerning the physics of frustration. This is a nice demonstration of how artificial spin ice can be a functional material and provides a step towards applications.”

These findings establish an unexpected route to transforming magnetic energy into the directed motion of magnetization. The effect now found in the two-dimensional magnetic structures comes with the promise that it will be of practical use in nanoscale devices, such as magnetic nanomotors, actuators, or sensors. Indeed, because angular momentum is conserved and spin is a type of angular momentum, the change in the magnetic moment of the system can in principle induce a physical rotation of the system (through the Einstein–de Haas effect). It may also find applications in magnetic memory where bits could be stored through local heating with laser pulses.

The paper, titled ‘Emergent dynamic chirality in a thermally driven artificial spin ratchet’, is published in Nature Materials. The work was funded by the European Union’s Horizon 2020 research and innovation programme, the Engineering and Physical Sciences Research Council (EPSRC), the Vienna Science and Technology Fund and the Royal Society.

Caption details: Fig. 1 (left): Electron microscopy image of the ‘chiral ice’ system studied by the researchers, showing the geometry of the nanomagnet assembly. Fig. 2 (right): Simulation of the magnetic state observed in the x-ray measurements, in a region of the chiral ice. Upper part: The magnetization points towards the bottom of the image in the ‘dark’ nanomagnets and towards the top of the image in the ‘white’ nanomagnets. Lower part: simulated magnetic-field structure within the array, generated by the magnetic north (brown) and south (blue) poles within each nanomagnet.

Link to paper in Nature Materials