The three-day summit, taking place in the Scottish Events Campus (SEC), opened its doors to the public for their Open Day to give the public, fellow researchers and media the chance to look inside one of the world’s largest brain research projects and to meet world-leading neuroscientists, computer scientists and robotics scientists. 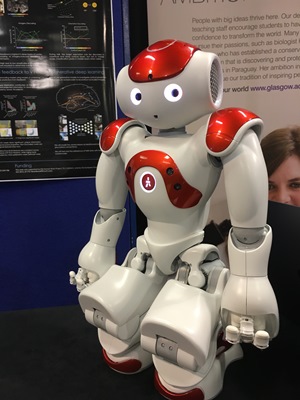 Following an opening address by Lord Duncan of Springbank, Parliamentary Under Secretary of State for Scotland, visitors were able to venture into the Science Market, where they experienced the latest in neuro-robotics, brain simulation, and neuromorphic computing (computers that run on spiking neurons like our brains), as well as heard speakers on topics ranging from quantum computing to teaching robots how to smile. The public were able to interact with the researchers and see physical and virtual examples of their work.

Prof Lars Muckli, from the University of Glasgow, said: "The University of Glasgow is delighted to host the Human Brain Project Summit. If we look towards the scientific landscape of brain research in 10 years’ time, our understanding of brain mechanisms will have changed. This neuroscience of the future will incorporate big data, large-scale simulations, activity recordings at multiple scales, artificial intelligence, robotics and supercomputing infrastructure.

"The Human Brain Project is today setting the stage for these future scientific revolutions and societal breakthroughs."

Visitors to the open day were able to wander the booths of the Science Market, where the HBP researchers presented their work. This work included mapping the brain, simulating the brain, understanding cognition, neuromorphic computers, medicine, supercomputing, neurorobotics, neuroinformatics and neurophilosophy.

The chair of the Science and Infrastructure Board, Professor Katrin Amunts, said that she was delighted to have as a guest speaker the US tech entrepreneur, Robert ‘Bo’ Ewald, who is a pioneer in the field of computing.

Ewald, whose company D-Wave is bringing the first quantum computers to market, gave the highlight presentation at the open day. Formed in 1999. D-Wave has sold the first versions of it quantum computer to Lockheed Martin, Google, and Los Alamos Laboratories. Professor Amunts is convinced that new computing technologies will be more and more inspired from what we know about the brain.

There were also talks delivered throughout the day by speakers from inside and outside the HBP on topics ranging from deep learning to teaching robots to recognise facial expressions.

About the Human Brain Project

The Human Brain Project is building a research infrastructure to help advance neuroscience, medicine and computing. It is one of the two largest scientific projects ever funded by the European Union.

The 10-year Project began in 2013 and directly employs around 500 scientists at more than 100 universities, teaching hospitals and research centres across Europe.

The HBP also undertakes targeted research and theoretical studies on brain structure and function in humans, rodents and other species. In addition, the Project studies the ethical and societal implications of HBP’s work.

Institute of Neuroscience and Technology