‌The first gravitational wave signals from the spectacular collision of two collapsed stars are providing astrophysicists with an extraordinary and unprecedented wealth of data about our universe, 130 million years after the stars met their violent end. An exciting new era of multi-messenger gravitational astrophysics has started with a bang.

In a set of ground-breaking discoveries, scientists from the LIGO and Virgo gravitational wave observatories, along with colleagues from 70 ground and space-based observatories, are today (Monday, 16 October) revealing a remarkable array of ‘firsts’ in astronomy and astrophysics arising from the detection of a binary neutron star collision. These results are made public today in a set of papers published across journals including Physical Review Letters, Nature and The Astrophysical Journal. IGR scientists‌

Among those scientists are researchers from the University of Glasgow’s Institute for Gravitational Research (IGR), whose research has been key in both the detection of the gravitational waves and the understanding of the new astrophysical results.

On Thursday, 17 August, this year, a gravitational wave signal was picked up at the US-based Laser Interferometer Gravitational-Wave Observatory (LIGO) detectors in Hanford, Washington, and Livingston, Louisiana.

That signal came from the collision, 130 million years ago, of two neutron stars – the densest stars known to exist, formed when massive stars explode in supernovas. A newly-formed neutron star’s remaining collapsed core is so dense that a single teaspoon of its material weighs about a billion tons.

In their final moments of orbiting each other, as their separation shrunk to within a few hundred miles, the stars spiraled ever faster and closer together, stretching and distorting the spacetime around them and giving off energy in the form of powerful gravitational waves. At the moment of collision, the bulk of the two neutron stars merged into one ultradense object – quickly followed by a “fireball” of gamma rays and then later by a “kilonova”, emitting light across the electromagnetic spectrum‌

The signal picked up by LIGO, and now known to scientists as GW170817, was the first time that gravitational waves had been detected from neutron stars. The Virgo detector, based in Italy, provided valuable information that helped narrow down the location of the collision in space. At nearly the same time, the Gamma-ray Burst Monitor on NASA’s Fermi space telescope also detected the accompanying burst of gamma rays, giving the first direct evidence to support a longstanding theory about the origins of such bursts.

The initial gamma-ray measurements, combined with the gravitational-wave detection, also provide further confirmation for Einstein’s general theory of relativity, which predicts that gravitational waves should travel at the speed of light.

Unlike previous gravitational wave signals detected from binary black holes, which emit no visible light, this first detection of gravitational wave signals from a binary neutron star collision provided an unprecedented opportunity for astronomers, who were able to turn their telescopes to view the event and its aftermath. For example, observations made by the U.S. Gemini Observatory, the European Very Large Telescope, and NASA’s Hubble Space Telescope reveal signatures of recently synthesized material, including gold and platinum, solving a decades-long mystery of where about half of all elements heavier than iron are produced. Also, by identifying the galaxy in which the GW170817 collision took place, astronomers have combined measurements of its distance, from the LIGO and Virgo data, with estimates of the galaxy’s velocity to make a completely new measurement of the rate at which the Universe is expanding. 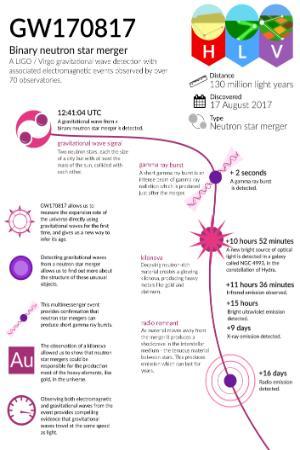 Professor Sheila Rowan, director of the University’s Institute for Gravitational Research, said: “This year Nature has given us the most dazzling gift. The first gravitational wave signals from colliding neutron stars are a key that has allowed us to unlock the door to answer several longstanding mysteries. One of these, tackled by working in partnership with colleagues whose telescopes observed the light, radio and other signals form this violent merger, is the puzzle of where some of the gold and other heavy elements in the cosmos have come from. We now believe that the violent collision of neutron stars could be a gold factory.

“With this binary neutron star detection, we’ve been able to both look and ‘listen’ for the first time and the results are quite extraordinary.”

Researchers from the IGR co-chaired several of the analytical science groups in the global collaboration, studying the data collected from LIGO and Virgo to find out more about the nature of the neutron stars involved in the collision.

“Unlike black holes, neutron stars are made of matter, with an accompanying mass which we can measure – in this case, we’ve learned that the signal originated from neutron stars with a mass roughly equivalent to our sun but compressed way down into a space about the size of the city of Glasgow.

“The gamma ray burst accompanying the gravitational wave signal also provides an invaluable insight into the nature of neutron star collisions. Short gamma ray bursts have long been thought to be powered by these types of collisions, and this event provides us with both gravitational wave signals from the stars’ inspiral as well as the electromagnetic signal from the gamma ray burst and its afterglow, which together provide us with a completely new way to look at the universe.”

Dr Chris Messenger, a lecturer at the University’s School of Physics and Astronomy, also played a leading part in the IGR’s astrophysics research.

He said: “This is a very exciting detection and we’re very lucky to have seen it. One of the key benefits of having both LIGO and Virgo receive this gravitational wave signal is that it very quickly allowed us to triangulate the position in the sky from which the signal originated. From there, we could let our electromagnetic astronomy partners turn their telescopes to the 30-degree patch of space we’d identified, taking images and collecting their own data.” 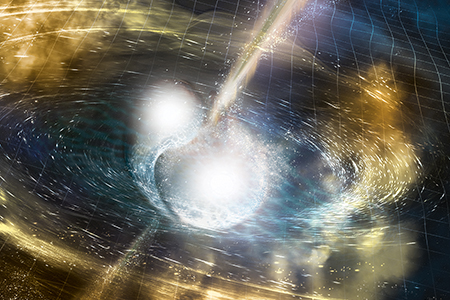 Professor Martin Hendry, Head of the School of Physics and Astronomy and chair of the LIGO collaboration’s Education and Public Outreach Group, said: “To measure the expansion rate of the Universe using the gravitational waves from colliding neutron stars has been my burning ambition for nearly 20 years. It's beyond my wildest hopes that we would be able to make this measurement so soon - with such exquisite observations not just in gravitational waves but across the entire electromagnetic spectrum.”

In the weeks and months ahead, telescopes around the world will continue to observe the afterglow of the neutron star merger and gather further evidence about various stages of the merger, its interaction with its surroundings, and the processes that produce the heaviest elements in the universe.

David H. Reitze, executive director of the LIGO Laboratory, said: “This detection opens the window of a long-awaited ‘multi-messenger’ astronomy. It’s the first time that we’ve observed a cataclysmic astrophysical event in both gravitational waves and electromagnetic waves — our cosmic messengers. Gravitational-wave astronomy offers new opportunities to understand the properties of neutron stars in ways that just can’t be achieved with electromagnetic astronomy alone.”

LIGO is funded by the NSF, and operated by Caltech and MIT, which conceived of LIGO and led the Initial and Advanced LIGO projects. Financial support for the Advanced LIGO project was led by the NSF with Germany (Max Planck Society), the U.K. (Science and Technology Facilities Council) and Australia (Australian Research Council) making significant commitments and contributions to the project.

More than 1,200 scientists from around the world participate in the effort through the LIGO Scientific Collaboration, which includes the GEO Collaboration and the Australian collaboration OzGrav. Additional partners are listed at http://ligo.org/partners.php.

The Virgo collaboration consists of more than 280 physicists and engineers belonging to 20 different European research groups: six from Centre National de la Recherche Scientifique (CNRS) in France; eight from the Istituto Nazionale di Fisica Nucleare (INFN) in Italy; two in the Netherlands with Nikhef; the MTA Wigner RCP in Hungary; the POLGRAW group in Poland; Spain with the University of Valencia; and the European Gravitational Observatory, EGO, the laboratory hosting the Virgo detector near Pisa in Italy, funded by CNRS, INFN, and Nikhef.