UofG Professor recognised for his dedicated research on carotenoid biochemistry

Professor Richard Cogdell, Hooker Chair of Botany at the Institute of Molecular Cell and Systems Biology, has been awarded a Fellowship of the International Carotenoid Society as well as their Trevor Goodwin Award.

The Fellowship recognises members of the Society whose consistent contributions to society, the scientific community, and the general public demonstrate a commitment to excellence, leadership, and sound ethics. 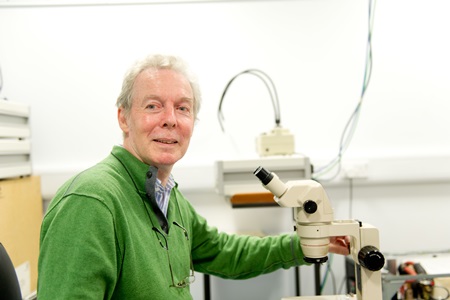 ‌The Trevor Goodwin Awards is given in recognition of Prof Cogdell’s outstanding achievement in research on carotenoid biochemistry and a lifetime of dedicated service to the carotenoid field.

Prog Cogdell said: "I am very pleased to get the Trevor Goodwin award since when I was a young researcher I got to know Trevor and he was very supportive of me. I have never forgotten this and that special memory makes this award particularly significant for me.

"The simultaneous award of the fellowship is just the icing on the cake. I have loved working with carotenoids as they are wonderful colourful molecules and its amazing now to get awards for having had years of fun with these fascinating molecules."

Prof Cogdell will receive both recognitions at the 18th International Symposium on Cartenoids, taking place July 9-14 in Lucerne, Switzerland.

His research, aimed at understanding the structure/function relationships of the pigment-protein complexes involved in energy transduction and electron transfer in photosynthesis, has resulted in over 250 publications in peer-reviewed journals including the journals Science and Nature.

Prof Cogdell’s lab isolated and produced high quality single crystals of the light-harvesting complex from the purple bacterium, Rhodopseudomas acidophila, leading to the solution of the three dimensional structure.

This landmark work was published in the journal Nature in 1995 and was instrumental in the development of our current understanding of how energy is harvested by photosynthetic organisms.

How carotenoids function in the primary reactions in photosynthesis has always been a focus of his research.

Prof Cogdell was awarded the Alexander von Humboldt Prize in 1996 and in 2007 was named a Fellow the Royal Society for his contributions to our understanding of photosynthesis.

In addition to work as a scientist, Professor Cogdell is an able administrator at his home institution, The University of Glasgow, where he has served as Chair of Botany, Director of the Glasgow Biomedical Research Center, Director of the Institute of Molecular, Cell and Systems Biology and Deputy Head of College of Medical and Veterinary and Life Sciences.