A pair of University of Glasgow physicists have become the latest recipients of awards which recognise the achievements of women in science. 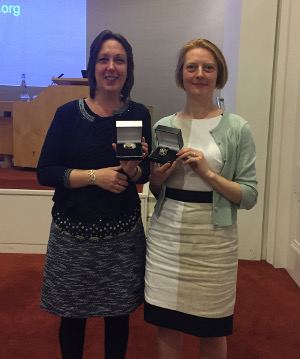 The Suffrage Science scheme, initiated by the MRC Clinical Sciences Centre in 2011, celebrates women in science for their scientific achievement and for their ability to inspire others. It encourages women to enter scientific subjects, and to stay.

Initially the scheme focused on women in the life sciences, before expanding to include the engineering and physical sciences and computing science.

The awards themselves take the form of pieces of jewellery designed by students of the art and design college Central Saint Martins-UAL. After two years, each of the 12 winning women in each group present their jewellery to a recipient of their choice.

Professor Rowan, director of the University’s Institute for Gravitational Research and Chief Scientific Adviser to the Scottish Government, received her award from Professor Anne Neville, from the University of Leeds’ School of Mechanical Engineering.

Professor Fletcher’s research focuses on space weather, with a particular focus on solar coronal and flare physics. Her award was passed on by Lucie Green, Professor of Physics at University College London.

Professor Rowan said: “I'm honoured to be in the position of 'inheriting' this beautiful and unique symbol celebrating women’s contribution to science.

“I'll do my best over the next couple of years to make sure that contribution continues to be recognised and supported."

Professor Fletcher said: "I’m proud to have received this Suffrage Science award and to be recognised as part of a talented group of women.

“It’s particularly apt that the awards were presented on International Women’s Day. I’m very much looking forward to continuing to work as an ambassador for women in science."

The presentation of these awards is the second time that University of Glasgow researchers have been recognised by Suffrage Science. On Ada Lovelace Day in October last year, Professor Muffy Calder became the first recipient of a new Suffrage Science award for contributions to computing science.