The destruction of Aleppo has particular poignancy for Syrian refugee Mahmoud Amir Alagha. The postgraduate dental student knows his parents and one of his sisters have been living in the shadow of the bombardment.  And even if they were not in what were the rebel-held parts of the city, he knows their lives have been fraught with danger.

But even if he has not seen these members of his family for five years – and does not know when he ever will – Mahmoud believes he has much to be thankful for.

When the Syrian refugee crisis was escalating in summer 2015, the University announced a scheme to offer four fee-waiver scholarships to refugee students – one for each of the four Colleges. Mahmoud was selected to receive the scholarship for the College of Medical, Veterinary and Life Sciences.

Having studied previously at Kalamoon University near Damascus and then the University of Sharjah in the United Arab Emirates, he applied to Glasgow to do a Masters in Oral and Maxillofacial Surgery in 2014. He was able to fund the first year of his two-year postgraduate course but by last year faced huge financial hardship and thought he would have to drop out of his studies.

“The fee-waiver scholarship was my only hope. I was grateful for the attitude of the University, not just because I was the one who got the scholarship itself, but that they really care about people who are facing this sort of situation. For me, this was a new life,” said Mahmoud.

The young Syrian has now graduated with distinction in his Masters degree and hopes to take his research to a higher level by doing a PhD. 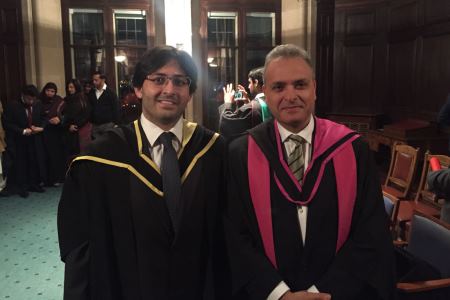 His research has focused on the use of four-dimensional technology – the fourth dimension being time – to measure facial paralysis associated with a number of conditions, from Bell’s Palsy to cancer.

By using video images of facial movements, Mahmoud creates a digital mask made up of thousands of mathematical points of reference.

“This data opens up a new horizon in the management, diagnosis and prognosis of these cases,” said Mahmoud.

The Glasgow Coma Scale for the assessment of trauma victims was developed by Graham Teasdale and Bryan Jennett at the Southern General hospital in Glasgow; Mahmoud hope that he and his colleagues can develop the Glasgow index of facial paralysis – one that would replace the current methodology.

One of the most satisfying aspects of his line of research is the potential to change people’s lives, not just physically but also psychologically.

His dream, however, is to enter academia full-time and pass on what he has learned to future dental students. His inspiration has been Ashraf Ayoub, Professor of Oral and Maxillofacial Surgery at the School of Dentistry.

When Mahmoud arrived at the University of Glasgow, he was nervous about his lack of research experience and ability to write essays.

On his induction day, Professor Ayoub assured him: “You lack nothing. You will be taught how to do it and if you work hard and give your best, you can achieve this.”

Professor Ayoub has proved to be not only a challenging teacher but also a compassionate father figure. When Mahmoud was called to an interview by the Borders Agency in Croydon and warned that he faced deportation, Professor Ayoub was his emotional support.

“He is my role model in life,” said Mahmoud.

His hope for the future is that a long-term ceasefire will be achieved.

“We have seen enough killing of innocent people. I hope that Syria can become a peaceful country again and people can just have a proper life.”