Hunterian Director, Professor David Gaimster, is to leave the University of Glasgow to take up a major new role in New Zealand. 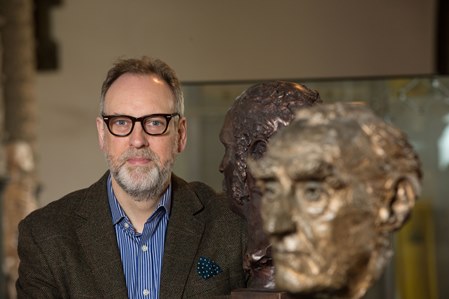 Professor Gaimster, who has been Director of The Hunterian for over 6 years, has been appointed Director of the Auckland War Memorial Museum, described as New Zealand's first Museum, and is expected to take up his new role in March.‌

Commenting on his move Professor Gaimster said: "It has been a great pleasure and privilege to lead The Hunterian over the last six and a half years.

"It has been particularly rewarding to help deliver the Kelvin Hall Phase 1 project, working in close partnership with the City of Glasgow, Glasgow Life and the National Library of Scotland. The Hunterian Collections Study Centre at Kelvin Hall is the most extensive in the Higher Education world and the envy of our peers.

David Newall, the Secretary of University Court, said: "I would like to wish David every success with this new appointment, but he is a real loss to the University. The Hunterian now has a greater impact than ever before on the academic work of the University and on the wider community. I am very grateful to David for the leadership and commitment he has shown in his years as Director of the Hunterian.'

Professor Gaimster has led The Hunterian through a significant period of change including:

• A significant shift in strategic priorities – fully aligning them with those of the University and making greater use of the collections to support research, teaching and public impact

• Year on year increase in visitor numbers (198,000 visitors to the Museum and Art Gallery in 2016 – our footfall is now amongst the highest for a university campus-based museum anywhere in the world) and much increased digital    offer

• The formation of a number of international research networks and partnerships, further establishing The Hunterian as a key player on the international cultural stage

• The launch of The Hunterian in the South, a rotational showcase bringing a flavour of the collections to the University’s Crichton campus in Dumfries.

Recruitment for a new Hunterian Director will start this month. Deputy Director, Mungo Campbell, will fulfil the role of Acting Director in the interim period.

2016 was a highly successful year for The Hunterian, and the future is equally exciting with the William Hunter Tercentenary celebrations taking place in 2018, and the planned further development of Kelvin Hall Phase Two.