Cyclically-changing environments could be the key to maintaining biodiversity

A new study, led by the University of Glasgow and published today in PNAS, found that cyclical changes in nature, such as seasons and tides, may create suitable conditions for the coexistence of a large number of species. 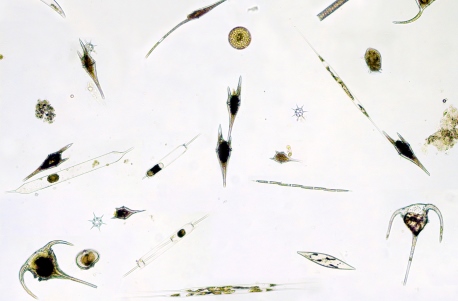 The study, conducted in collaboration with ecologists from Texas A&M University and The University of the Aegean, focused on phytoplankton – microscopic algae that thrive in the world’s oceans, lakes and rivers. How such staggeringly diverse communities persist over time has been a long-standing question for ecologists since the dawn of ecological thinking.

Phytoplankton affects ecosystems by fuelling the entire ocean food chain, and is also critical in stabilising the climate because they remove huge quantities of carbon dioxide from the atmosphere, reducing its impact on global temperatures.

The researchers found that cyclic events in nature create an environment in which resources vital for phytoplankton growth change over time, and the diversity of phytoplankton is therefore maintained.

Senior author, Dr Sofie Spatharis, Lecturer in the School of Life Sciences, said: “We know that environments change over time because of natural cycles such as tides and seasons. However, despite being so commonly observed in nature, these cyclic patterns have not been investigated as a means of supporting high biodiversity.”

Co-author Dr Rebecca Mancy explained: “Only in cyclic environments were many species able to coexist, doing so by forming clusters of similar species. Our results were very exciting because this pattern arose even when we changed how environmental conditions fluctuated, suggesting that this mechanism could be quite general and common in the real world.”