Salmon help their offspring by dying on the spawning grounds

Spawning salmon that die after migrating home actually do their offspring a favour.

The study, published today in Ecology Letters, found that by dying, the decaying bodies of the salmon fertilise the stream and create an environment which favours the growth of the young fish and maintains their genetic diversity. 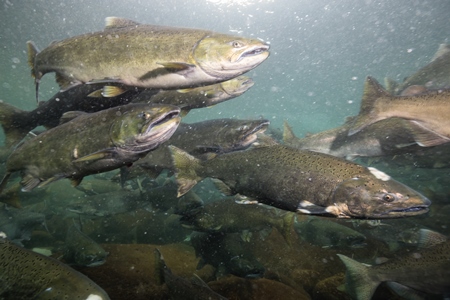 Spawning salmon migrate hundreds of miles across the ocean back to the stream in which they were born, but then often die just after spawning.

Streams that lack dead adult salmon have fewer insects (less ‘fish food’), so that the surviving fish fry are smaller and belong to fewer families. The resulting loss of genetic diversity could make these salmon populations more vulnerable to extinction in a changing world.

The research, led by scientists from the University’s Institute of Biodiversity, Animal Health and Comparative Medicine, came from a detailed experimental study of salmon streams in northern Scotland.

The researchers tested what happened when they manipulated levels of nutrients that would come from decaying salmon carcasses during the winter spawning season. Five streams received the normal level of nutrients from carcasses, while five other streams only had low nutrient levels – but all ten streams got the same number of salmon eggs from the same group of families.

The team of researchers – which included fishery biologists from the local Fisheries Trust as well as scientists from Marine Scotland and the US Forest Service – then returned five months later to look at the impact of these parental nutrients.

Corresponding author, Dr Sonya Auer, said: “Our surveys, backed up by DNA fingerprinting, show that fewer families of young salmon survived in the streams that lacked parent carcasses – and those that were able to survive had higher maximum rates of metabolism, which indicates that the environment favoured a particularly competitive and aggressive kind of fish.

“But we didn’t see that same narrowing of the gene pool in the streams with more nutrients, so a by-product of the parents’ death is that they maintain the genetic diversity of the next generation.”

Professor Neil Metcalfe, Professor of Behavioural Ecology at the University of Glasgow, who coordinated the study, said: “The longer-term consequences of these parental nutrients are bound to be complex, but these findings indicate that salmon shape their environment in a way that alters their very own destiny.

“If populations decline so that there are fewer dead adults to fertilise the spawning grounds it could reduce the viability of the remaining fish.”

The study, ‘Nutrients from salmon parents alter selection pressures on their offspring’ is published in Ecology Letters. The work was funded by a grant from the European Research Council to Prof Metcalfe.