A parasite which kills thousands of people each year in sub-Saharan Africa arose comparatively recently, and its unusual sex life may lead to its own extinction, scientists have found. 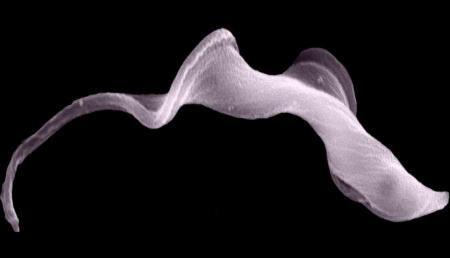 Researchers from the University of Glasgow’s Wellcome Trust Centre for Molecular Parasitology in the Institute of Biodiversity, Animal Health and Comparative Medicine have discovered that Trypanosoma brucei gambiense (T.b. gambiense), the main parasite that causes African Sleeping Sickness, has existed for thousands of years without reproducing sexually.

In a study, published today in the journal eLife, the researchers describe how sequencing the genomes of a large collection of T.b. gambiense has revealed that the parasite population today is made up entirely of asexual clones descended from a single ancestor.

Originally an animal parasite, T.b. gambiense ‘jumped’ into the human population within the last 10,000 years, at a time when livestock farming was developing in West Africa. The parasite is transmitted to humans by the bite of tsetse flies. Once in the bloodstream, T.b. gambiense can lie dormant for months or years without causing symptoms. Infected people suffer increasing damage to their nervous system, until they eventually lapse into a coma—the symptom which gives sleeping sickness its name.

The study’s lead author, Dr Willie Weir, said: “We’ve discovered that the parasite causing African Sleeping Sickness has existed for thousands of years without having sex and is now suffering the consequences of this strategy.

“An organism’s genetic blueprint is encoded in DNA packaged within structures called chromosomes. Most organisms have two copies of each chromosome and, through sexual reproduction, the DNA within the chromosomes can recombine randomly, in effect shuffling the deck of DNA cards.

“This process generates genetic diversity and, through natural selection, undesirable combinations and mutations are eliminated from the population, promoting long-term survival of the species.

“However, some organisms appear not to have sex at all. Evolutionary theory predicts that they should face extinction in the long-term and that a lack of sexual recombination should leave a characteristic genetic ‘signature’ in their DNA. While being theoretically predicted for almost 20 years, evidence for this signature has been elusive.”

The team’s research has shown that T.b. gambiense arose from a single individual parasite within the last ten millennia and, over time, mutations have accumulated on each chromosome copy.

Dr Annette MacLeod, senior author on the paper, added: “Because of a lack of sexual recombination, each copy has evolved independently of the other—a phenomenon called the ‘Meselson effect’. We have detected the first conclusive evidence of this effect in any organism at the genome-wide level.

“Essentially, the parasite compensates for its lack of sex by overwriting mutations through ‘copying and pasting’ DNA from one chromosome to another. However, our study suggests that this can only go some way to compensating for a lack of sex. Theoretically, this parasite species cannot survive indefinitely without sex and the predicted consequence of this is that it will become extinct in the long-term.

“In the near to medium term, though, identifying this weakness in the parasite could help researchers find ways to develop new forms of treatment for sleeping sickness which build on our findings. For example, the inability of individuals to share genetic information with each other could hamper the ability of the organism to develop resistance to multiple drugs.”

The paper, titled ‘Population genomics reveals the origin and asexual evolution of human infective trypanosomes’, is published in eLife. The research was funded by the Wellcome Trust.