Universities of Glasgow and Delhi sign Memorandum of Understanding

The Universities of Glasgow and Delhi speak the same language when it comes to academic partnership – and English literature in particular. 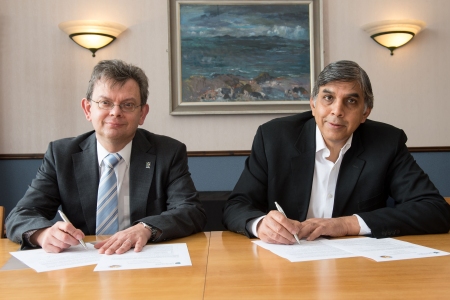 Both universities are members of Universitas 21 (U21), the leading global network of world-class research-intensive universities for the 21st century. The U21 AGM, Presidential Symposium and Student Summit have been hosted by the University of Glasgow over the course of the week, allowing the formal signing of the agreement to take place.

The first venture of this exciting collaboration will kick off in autumn this year when colleagues in Glasgow will use video-link technology to teach aspects of English literature to students in Delhi. The exchange is a two-way one - Glasgow students will receive lectures in post-colonial literature from Delhi.

The project has received a £10,000 grant from the British Council Knowledge Exchange Partnership as well as support from the University of Glasgow’s International Partnership Development Fund.

The first joint project will be in English literature and is to be led by Professor Nigel Leask, Regius Chair of English Language and Literature in the University of Glasgow’s School of Critical Studies and a Fellow of the British Academy.

“There are certain areas for which the English department at the University of Delhi do not have a lecturer such as Mediaeval and Renaissance literature and these are major strengths in our world-renowned School of Critical Studies,” said Professor Leask.

Plans are well advanced to provide video-linked seminars for senior undergraduate students and/or Masters students at Delhi with a view to eventually having students at both institutions taught simultaneously. He observed: "It is an exciting prospect to have students from two continents exchanging ideas on literature from Chaucer to Shakespeare."

These visits have fostered a programme of regular staff exchanges and next month he hopes to welcome Dr Gautam Chakravarty, a specialist in 19th century Indian-British literary relations. Staff exchanges between the two institutions will build up expertise and collegiality, believes Professor Leask.

Professor Vivienne Baumfield, International Dean for Eurasia and South Asia, observed that this is the first of many shared projects and plans are already afoot to expand the collaborations through a range of interdisciplinary student activites.