Jim Murdoch, Professor of Public Law and International Dean for Mobility, has been presented with one of two Universitas 21 Awards for Internalisation in recognition of his pioneering teaching of human rights law in an international context.

The second recipient of the U21 Award was Professor Martyn Poliakoff of the University of Nottingham, who was honoured for his innovative work in popularising science around the world.

The awards were presented at the U21’s Annual Presidential Meeting, which has been held at the University of Glasgow this week (May 13-16). 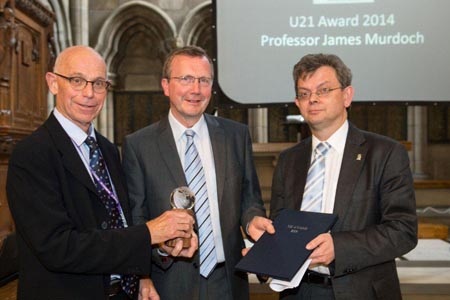 A particular focus of Professor Murdoch’s work has been the European Human rights Project, which allows students to plead a case before Judges at the European Court of Human Rights in Strasbourg. This led to the introduction of a programme run by the University of Glasgow for Bosnian law students and subsequently students from Belarus. In recognition of this work, Professor Murdoch was awarded the Pro Merito Medal of the Council of Europe in 2013.

Professor Murdoch has also initiated an integrated internationalisation programme offering students the opportunity to build on their international experience through exchanges. He recently instituted a programme to promote excellence in the teaching of law through developmental support to staff in partner universities.

He said of his award: “I am truly grateful to have been granted a U21 award – my work in the human rights field is heavily reliant on education in an international context and it is wonderful that Universitas 21 is acknowledging the importance of long-distance learning. Every student should have the opportunity to share their ideas and learn from contemporaries across the world.”

Jane Usherwood, U21’s Secretary General, said: “This is the third year that we have sought to recognise the contribution played by individual staff in internationalising higher education and once again we are fortunate in being able to celebrate the hard work and commitment of colleagues over many years.

“Both Professor Murdoch and Professor Poliakoff are role models for how opportunities can be developed for students around the world through collaboration and innovation, opportunities which reach out from the campus to the world in which we live, and we are delighted to be able to acknowledge their contributions through these U21 Awards.”

Universitas 21 is a network of 27 research-led universities around the world. It aims to promote and achieve collaboration, co-operation and work of a comprehensive nature, drawing on a strong bond of collegiality among similarly-minded universities, all of whom occupy a high status in their respective global regions and among the international league tables of higher education.

The University of Glasgow is one of the founder members of Universitas 21, which first met in Melbourne in 1997.