A Pint of Science, please, barman

How about a dash of volcanology with your real ale? Or even a splash of Higgs Boson with a glass of wine?

That is exactly what a group of young scientists at the University of Glasgow are offering in an innovative public science festival this week.

The “Pint of Science” project is run by a group of volunteer PhD students and postdoctoral researchers who are fired up by the idea of communicating cutting-edge science to the general public in an informal setting – namely, the pub.

Over the three nights between May 19-21, some of the best science communicators from the University of Glasgow and other higher education institutions will host scientific discussions in four pubs close to the University. They will talk for 15-30 minutes, with the remainder of the evening devoted to questions and answers, and general discussion. 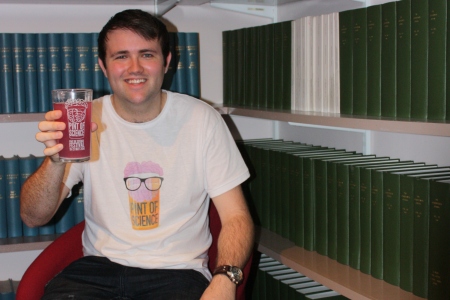 The festival was started up last year in Oxford and Cambridge, but this year has spread to a further 19 cities across six countries -USA, France, Australia, Switzerland, Ireland and the UK – although Glasgow is the only university in Scotland to participate.

Scott Smith, the Glasgow co-ordinator, is a second-year PhD student in the Material and Condensed Matter Physics group in the School of Physics and Astronomy – or put more simply, he is researching how electrons travel through materials.

The first in his extended family to go to university, he was struck by the fact that friends and family loved discussing his scientific research with him, but would not have felt comfortable in a classroom or lecture theatre setting.

His own first experience of science was as a school pupil when he attended a talk by University of Glasgow cosmology expert Professor Martin Hendry at the Hunterian Museum on “why we couldn’t have faked the moon landings”.

Scott said: “I thought, ‘If this is what they do at university, that’s what I want to do’.”

He added: “If I hadn’t been exposed to science in a public setting I would never have come to university and I feel it’s important to get as many people as possible exposed to science – not only to open the door to future research but also to promote the work done here at the University of Glasgow.”

Each of the four participating pubs will have a specific theme: Matters of the Mind – Lansdowne Bar and Kitchen; Our Body – Grosvenor Café; Physical Science – Dukes; Earth Science – Curler’s Rest.

Topics include anatomy, brain and behaviour, space debris and asteroids, the dark side of the universe, vaccines, cancer and perception, to name but a few.