Making faces: how to appear more trustworthy, dominant or attractive

If you have one of those faces that people just don’t trust, fear not: according to scientists, you can pull an expression that will make you appear more honest.

Researchers have found that faces deemed to be untrustworthy, dominant or unattractive by dint of their shape, can be made to appear the opposite by making specific facial expressions.

They say this ‘social camouflage’ can be practised and deployed by people to mask the default social impression inferred from their face and ingratiate themselves to others in a host of situations.

Dr Daniel Gill of the Institute of Neuroscience and Psychology at the University of Glasgow, who conducted the research, said: “Humans communicate a lot through their facial expressions when negotiating various social situations.

“But whether we like it or not, previous well-documented research has shown that people tend to perceive certain personality characteristics or traits in individuals based on the structure of their face.

“This means some people can be judged to be untrustworthy or domineering simply by how they look – a square jaw and large brow conveying dominance, for example. It can have implications for things like mate selection and job opportunities.

“However, there are also basic facial movements that people identify with specific social traits and these movements can override the default impression people have of another person’s face.” 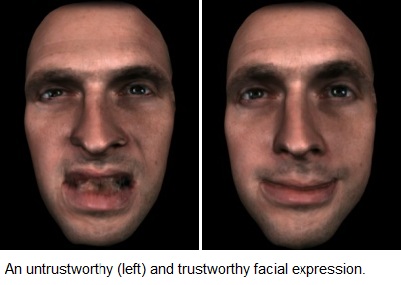 The researchers used software to generate three-dimensional animated images of faces which can be programmed to move one or more of 42 individual facial groups of muscles – or action units, as they call them – to form a facial expression.

They then asked a group of 12 volunteer observers to judge a set of randomly generated facial expressions on trustworthiness, dominance and attractiveness. This allowed the researchers to ascertain what aspects of an expression conveyed these particular characteristics.

They repeated this procedure again with a different set of volunteers, this time asking them to rate static faces with neutral expressions for the same traits, but based solely on facial morphology – or structure.

Finally, to test whether the static, neutral faces deemed to be untrustworthy, dominant or unattractive could be made to appear trustworthy, submissive and attractive, the researchers animated the second set of faces with the expressions identified with these characteristics from the first experiment.

The study revealed that faces thought to look untrustworthy could be made more honest-looking simply by activating a few muscle groups to form a more virtuous expression. Similarly, dominant faces could appear meeker through a different expression, however attractiveness, or ugliness, is much harder to feign.

Dr Gill added: “Furthermore, people could train themselves to look more dominant, trustworthy or attractive, although the latter is much harder as the perception of attractiveness is based on many more factors than just facial expressions – as any casting director will know.

“An actor can certainly look more dominant or trustworthy according to their role, but would probably struggle to look more attractive. For that you’d really need an attractive actor.”

Professor Philippe Schyns, Director of the Institute, said: “This is the first study to examine how dynamic facial expressions affect the perception of social traits or characteristics.”