On Becoming a British Citizen 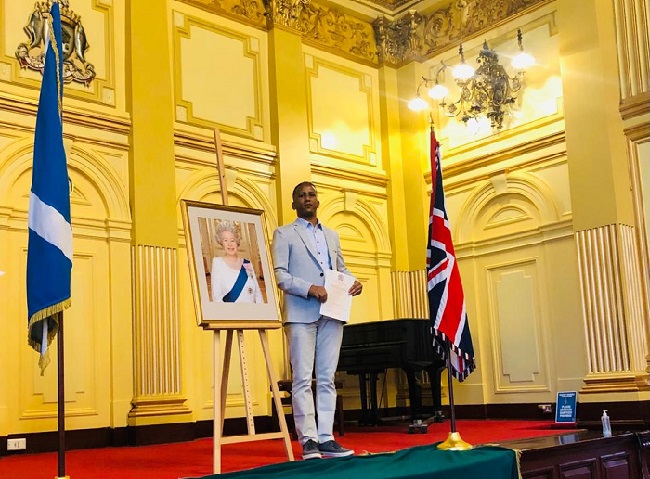 By Hyab Yohannes, UofG PhD student based at the School of Education UNESCO Rila Team

My parents were peasant farmers in Eritrea, where I was born. Unlike my parents, who did not have the opportunity to study, I studied primary, secondary and undergraduate education in my home country.

I graduated in August 2010 with a bachelor’s degree in geography from the Eritrean Institute of Technology. In addition to education, I also took part in mandatory military training and open-ended national service, which contributed to my decision to flee Eritrea.

My life and human dignity in my home country were questioned, and my existence was reduced to emptiness. A sense of lack and worthlessness left me feeling fearful, confused and not knowing who I was. I also felt pain and a deep sense of anger that I could not express. Life in Eritrea felt unbearable and hopeless, and I had to leave the country to save my life. In March 2011, I left Eritrea for Sudan.

Since leaving my home country, I have survived detention, torture and human trafficking. On the way to Sudan, my three friends and I narrowly escaped arrest by border security guards. After crossing the border into Sudan, I went into a refugee camp called the Shagarab Camp in eastern Sudan, where I stayed for about six weeks.

I then smuggled myself to Khartoum, the capital of Sudan, where I worked as a teacher for over a year. Unfortunately, after 14 months of working as a teacher in Khartoum, I was kidnapped by human traffickers who attempted to transport me to the Sinai desert for ransom and potential organ harvesting. Luckily, I narrowly escaped after several weeks of torture and sought asylum in Egypt.

I lived and worked in Egypt as a refugee for about three years. I worked with refugees, including victims of human trafficking, sex and gender-based violence victims and unaccompanied children. I also advocated for the release of refugees forgotten in detention centres for several years, some of whom had been in underground prison cells for over a decade. In doing so, I made several lifelong friends.

The reality is that becoming a British citizen and being an Eritrean enter into a realm of indistinction. Reconciling this indistinction requires becoming a national, a transnational and a global citizen. For me, at least for now, these scales and registers of belonging enter into an ambiguous attunement.

This space of attunement, a space where here and there, home and host, are inseparable, is where my capacity to give and receive language, culture and knowledge is grounded. As my life was at risk in Egypt, the UNHCR decided to resettle me in the UK. In October 2015, I came to the UK under the UK Gateway Protection Programme. Since coming to the UK, I have been working, as well as studying.

Working and Studying in the UK

My first job in the UK was as a key worker in a mental health hospital in Keighley. I have also worked as a family organiser for Safe Passage UK and an education and employment adviser at RETAS Leeds.

I am currently involved in several roles both in the UK and at the international level. I am a member of the Right to Remain Ltd Management Committee and the RSE Young Academy of Scotland (YAS). I have also recently been appointed as a member of the International Survivors of Trafficking Advisory Council (ISTAC), assisting Democratic Institutions and Human Rights (ODIHR) in combatting the trafficking of human beings.

Between September 2016 and October 2017, I studied an MA in migration and diaspora studies at SOAS University of London; I completed my MA with distinction. I am currently a PhD candidate at the University of Glasgow and holder of the UNESCO RILA scholarship. I have recently submitted a final draft of my PhD thesis, and it is now with the examiners. My Viva Voce is in August 2021, and I expect to hold a doctorate soon after. In the meantime, I am preparing for my Viva Voce and working as a graduate teaching assistant at the University of Glasgow.

For nearly a decade as a refugee, I found myself caught in an extra-legal continuum. Eritrean authorities identify my relationship with my home country as that of a ‘dissident’.

Elsewhere, I have been identified with labels such as an ‘illegal migrant’, a ‘victim’, an ‘asylum seeker’, a faceless name, a figure or even a threat. For the last five and half years, I have been a ‘refugee’ with the permanent right to remain in the UK.

Today on the 29 June 2021, I became a rights-bearing subject for the first time in my life; I have become a British citizen.

For involuntarily displaced people like myself, becoming a British citizen was not an easy ride; it meant fleeing oppression, surviving a perilous journey, navigating the bureaucratic asylum system, and, of course, filling out long forms and paying the expensive £1349 citizenship fees.

It also requires passing a ‘life in the UK’ test and an English language speaking and listening test if you are not lucky enough to be one of the few exempted people. I have gone through all of that; I met the ‘fear of persecution’ formula, survived an ordeal, passed life in the UK test, filled out all forms, and paid all fees. Still, I had more to do.

After I submitted my application, I had to upload all the required documents and book an appointment with the Home Office’s ‘corporate partner’ to ensure that all the documents submitted are checked and give biometrics.

It took six months for the Home Office to grant me citizenship on the condition that I attend ‘citizenship ceremony’ and perform affirmation of allegeiance and a pledge. I also sang the national anthem; God Save the Queen. All of this is to apply for a British passport, not the burgundy British passport, though. These are the rather normalised rites of passage – the rites of becoming a British citizen and, in the process, face the possibility of unbecoming who you have been.

Becoming a citizen of a host country is surely a desirable and respectable status. However, when I attempt to understand it beyond its practical benefits, it evades my comprehension.

Is it a start of a new beginning or an end of what I have become since birth? Admittedly, I cannot offer a shred of thought on this subject with which I am unfamiliar. I am still learning and, at the same time, unlearning the insecurities of being a former refugee.

Holding onto my identity as an Eritrean

Becoming a citizen of a host country brings a distant possibility of unbecoming an Eritrean (my country of birth). In my mind, I want to hold on to my identity as an Eritrean, for Eritrea is where my ancestors have lived and died, where my umbilical cord is buried and where my parents and relatives were born and live and will be buried.

As a common burial ritual, my body might return to Eritrea to be buried next to my parents and my other body – the umbilical cord. Thus, Eritrea always holds a permanent nearness, however far away I might be. It is not safe enough to visit my family and not distant enough to forget.

Thankfully, I have a family here too. Indeed, a family who welcomed and congratulated me with their beautiful Scottish kilts and collar shirts but also with their zuria, kani and shifon.

A realm of Indistinction

The reality is that becoming a British citizen and being an Eritrean enter into a realm of indistinction. Reconciling this indistinction requires becoming a national, a transnational and a global citizen.

For me, at least for now, these scales and registers of belonging enter into an ambiguous attunement. This space of attunement, a space where here and there, home and host, are inseparable, is where my capacity to give and receive language, culture and knowledge is grounded. 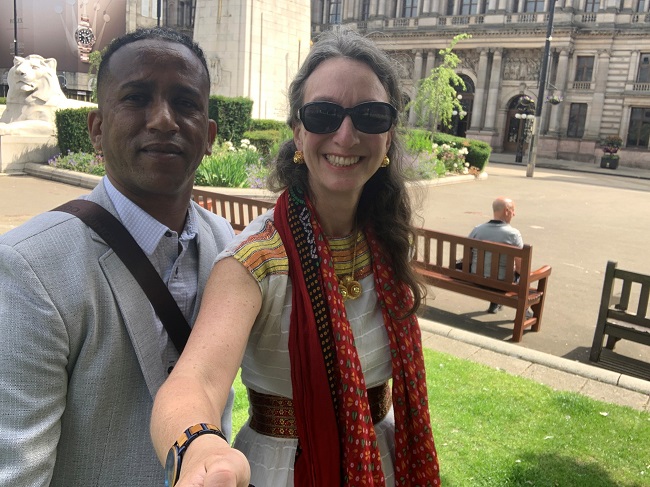 Hyab regularly writes and blogs about his life, work and vision. You can read more on his website.