‌Ann Allen MBE, Executive Director of Estates and Commercial Services, received the Business Leadership Award at the Scottish Property Awards, at a ceremony attended by more than 700 guests at Glasgow’s DoubleTree Hotel on Thursday, February 28.

Sponsored and presented by the Bank of Scotland, Mrs Allen – who leads the University’s £1bn campus development programme - was recognised for her career which in recent years has been dedicated to the development of property and its unique role in higher education. 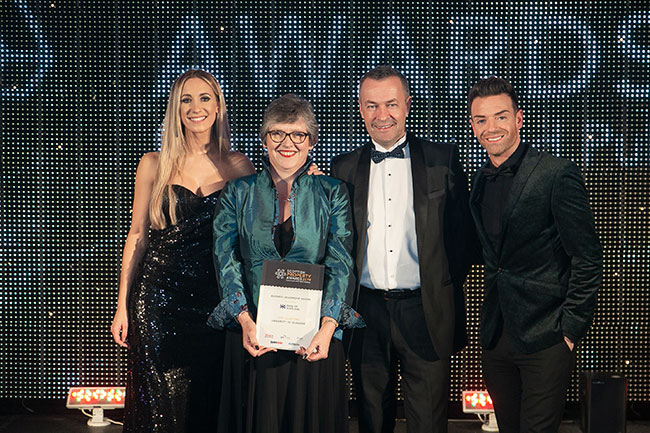 Mrs Allen said: “It is a real honour to receive the Business Leadership Award in the Scottish Property Awards. I am particularly pleased to receive this award as it recognises the contribution Higher Education is making into the property and the built environment. I should like to take this opportunity to pay tribute to the outstanding team working on the University’s £1bn Campus Development programme which will not only transform the teaching and research environment at the University but transform the West End of the city of Glasgow and further afield. Any leader is only as good as his or her team members.

“This is the University’s biggest estates programme since 1870 and one of the biggest construction programmes in Scotland’s education sector. It will allow the University’s students and world-leading researchers to work in an environment which will enhance their learning, work and its impact. It will also allow the University to work more closely with industry as part of the campus development programme includes a commercial/innovation sector. I look forward to the University being more closely linked to its cultural neighbours, such as Kelvin Hall, Kelvingrove, the Riverside museum and the Science Centre and to the improvements in the public realm that are an inherent part of this programme.”

Mrs Allen, who received an MBE in the New Year’s Honours, is a chartered surveyor, joining the profession over 35 years ago at a time when few women chose surveying as a career option. She has worked for diverse organisations such as SEGRO - a major property company - the Home Office and John Lewis.

She joined the University of Glasgow in April 2012 just as the University was completing the purchase of the Western Infirmary site. It was a once-in-a-lifetime opportunity to help shape the development and to leave a legacy for future generations of students and academic staff. Mrs Allen is extremely supportive of women in the profession through Women in Property, and is involved with Construction Scotland, SAUDE - the Scottish Branch of the Association of University Directors of Estates - and is a trustee of the National Museum of Scotland.