Welcome to Glasgow - From "Your City's Friend"

Students of Chinese nationality starting their first academic year at Glasgow’s universities and colleges have been offered a warm and visible welcome – from the city’s biggest taxi company. 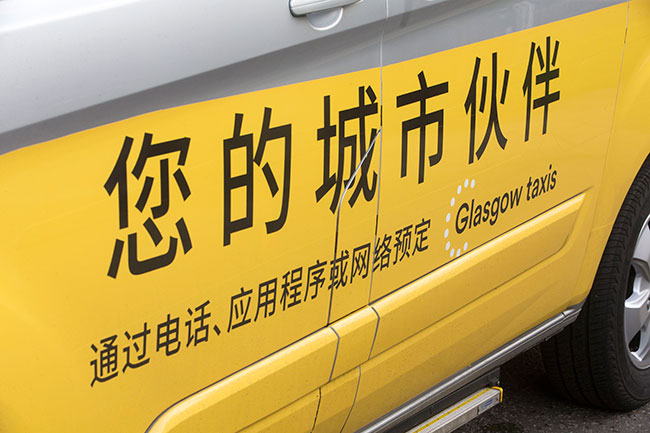 Half a dozen iconic Glasgow Taxis with slogan “Your City’s Friend” written on the side in Chinese are now operating on the city’s streets 24/7. The taxis are already proving hugely popular with Glaswegians of Chinese descent, Chinese students in the city and visitors alike, with many pointing, smiling and waving when they see the unique cabs.

Glasgow Taxis Ltd, the largest taxi company in Scotland and biggest in the UK outside London, say the taxis reflect their role as ambassadors for the city as well as celebrating Glasgow’s large Chinese community.

Dougie McPherson, Glasgow Taxis chairman, said: “Glasgow in 2019 is a truly international city and we wanted to make sure our messaging and communications embraced that.

“The response since we introduced our Chinese Your City’s Friend taxis has exceeded any expectation with drivers enjoying a really positive response – one lady commented it was like being at home while many school pupils have joyfully shouted the slogan loudly upon seeing it.

“It’s been a fantastic response and we are currently considering the merits of extending this to other nationalities and languages. The positivity and togetherness is exactly what both the city and Glasgow Taxis Ltd stands for.”

The University of Glasgow’s most recent planning and business intelligence data revealed that students at the university of Chinese nationality during 2018/19 numbered almost 3,500. 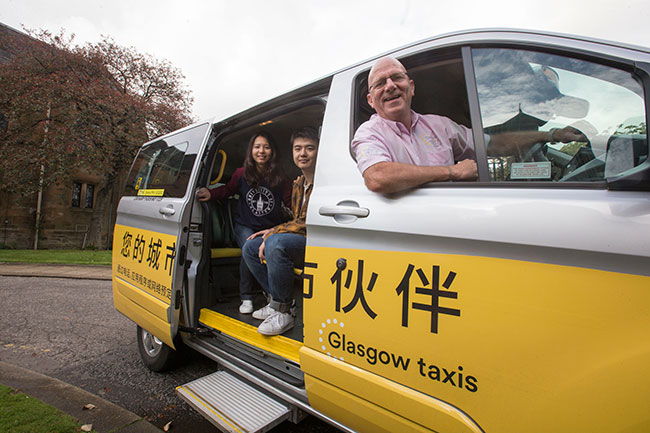 Qinzi Deng is a Chinese-born student at the University of Glasgow, now in her second year of studies, and was delighted to see the new taxis on Glasgow’s roads.

She said: “I think it gives such a warm welcome for Chinese students because we see our own characters on the side of the taxi and it’s a nice thing to share with our friends.

“There are a huge amount of Chinese students here and it’s nice that they can see a taxi like this that can be for them, making it easier for them to make contact or call a taxi if they need one.

“It helps to make people feel more comfortable in the city. They will quickly understand that Glasgow is full of friendly people and just how friendly a city it can be.”

Glasgow Taxis is a friendly society run on behalf of its members and drivers and the single largest taxi provider in Scotland and in the UK outside London, with all vehicles wheelchair accessible and all drivers licensed and certified.

The company has been named as a finalist in the 2019 Glasgow Business Awards in the category of Excellence In Communications. The winners are announced on Thursday, 3 October.