This year marks the 5th anniversary of the establishment of the Confucius Institute at the University of Glasgow. The Principal of the University of Glasgow, Professor Anton Muscatelli welcomed over 80 delegates and distinguished guests including Professor Jianfei Ma, Deputy Director-General of Hanban (Confucius Institute Headquarters), MSP Shirley-Anne Somerville, Minister of Higher Education, Further Education and Science from Scottish Government, Mr Yongli Wang, Minister Counsellor for Education at the Chinese Embassy to the UK, Mr Xinchun Pan, Consul General of the People’s Republic of China in Edinburgh, Professor Naijia Guan, Vice President of Nankai University, and Mr Tongdu Chen, Chief Representative of Hanban in the UK.

Professor Muscatelli said it was a great honour and privilege to host the second UK and Ireland Conference after London in 2015, he also recognised and thanked Hanban, the Chinese Embassy and Consulate General, the Scottish Government and Nankai University for their support to the Confucius Institute. He has recognised and values the fact that promoting understanding and awareness through the work of CIs addressed in practical ways that focus on language and culture and that engage: across Education, through schools, Colleges & Universities; across business and industry, and across the Arts. The Confucius Institute is a bridge to connect with China and promote Chinese language and culture.

Shirley-Anne Somerville MSP said Scotland places great value on its partnership and engagement with China and there are broader benefits we can both share through education and through a greater understanding of our cultures and our societies. The First Minister, Nicola Sturgeon met with the Chinese Minister of Culture and renewed a Cultural Memorandum of Understanding between two governments, which demonstrates Scotland’s commitment to developing a long-term relationship with China based on shared values, partnership and trust. She also said the work of the Institute is of great importance, it is a key way to promote and improve that shared understanding between the people of the UK and of China. MSP Somerville thanked Hanban for their continuing support for Confucius Institutes in Scotland, across the UK and beyond.

Professor Ma said he was pleased to see the development and achievements of the Confucius Institutes across the UK and Ireland, and he recognised the hard work that all the people who have been involved in promoting Chinese language and culture. Hanban will continue providing all the support and help to all the Confucius Institutes. He wished for the Conference to be a huge success and that the delegates have a very productive and enjoyable day.

Mr Pan said that he has seen much interest and enthusiasm for Chinese language and culture from different groups of people, especially through the popularity of the Chinese programme during the Edinburgh International Festival. The Confucius Institutes have played a crucial role in promoting the exchanges and collaborations between China and Scotland. 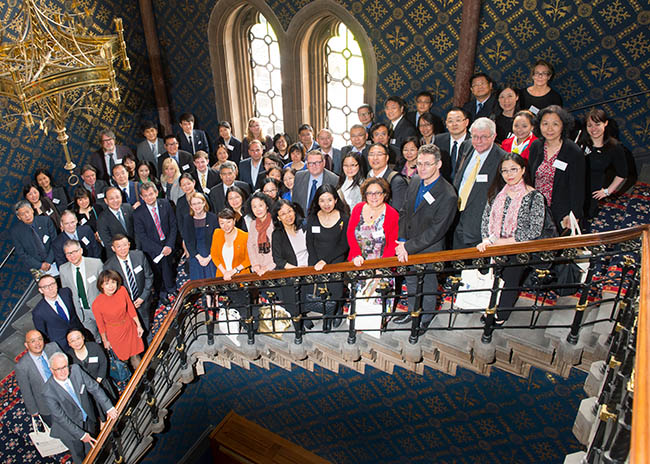