Professor Anna Dominiczak, Regius Professor of Medicine, Vice-Principal and Head of the College of Medical, Veterinary and Life Sciences, has been made a Dame Commander of the Order of the British Empire at a ceremony at Buckingham Palace. 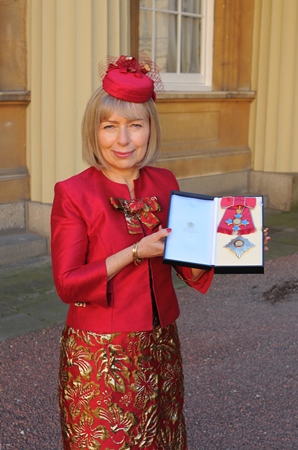 The damehood was announced as part of the Queen’s Birthday Honours in June and is in recognition of her services to cardiovascular and medical science.

Professor Dame Dominiczak said: “I am extremely proud to receive this honour and consider it also a recognition of the work of my many dedicated, talented and inspiring colleagues at the University of Glasgow. Their support has been invaluable. It is indeed an honour for me to lead the work of the College of Medical, Veterinary and Life Sciences which excels across so many areas and it is my hope that we can continue to positively transform the outcomes for so many people with cardiovascular and other chronic diseases.”

A graduate of the Medical School in Gdansk, Poland, and one of the world’s most eminent cardiovascular scientists and academics, Professor Dominiczak’s research into hypertension, cardiovascular genomics and precision medicine identifies genetic factors which may predispose people to heart disease and stroke. She has authored almost 400 research publications and was instrumental in creating the British Heart Foundation Cardiovascular Research Centre, of which she was Director from 2000-20100.

In 2010 she became Vice-Principal and Head of the College of MVLS at the University of Glasgow and has been a driving force in positioning Scotland as a global leader in precision medicine. She has led the world-leading academic developments of the Queen Elizabeth University Hospital in Glasgow, which will develop advanced new treatments for chronic diseases.