7 Tesla scanner arrives at the QEUH 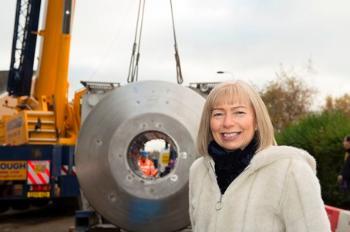 The 7T MRI scanner will offer researchers the opportunity to learn more about a host of health conditions, initially focusing on brain imaging to look at conditions such as small blood vessel disease of the brain, stroke, vascular dementia, brain tumours, Parkinson’s, Alzheimer’s Disease, epilepsy and multiple sclerosis.

The 7T scanner will be located on the ground level of ICE, which will also include extensive accommodation for research and development and an extension to the University’s Clinical Innovation Zone, providing an entire floor for industry collaboration and partnership. Over a ten year period the development is predicted to create around 400 jobs and £85m for the Scottish economy. 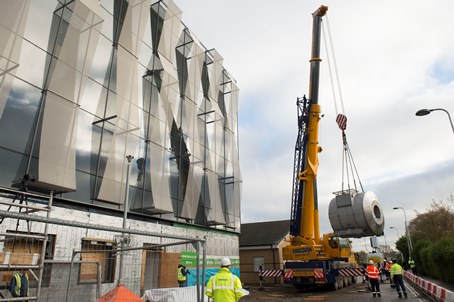 “In some conditions, looking at very small parts of the brain with the 7T scanner might make a big difference. In areas such as Alzheimer’s and some types of stroke, the areas of interest are very small – even microscopic – parts of the brain that we can’t see with the scanner technology that is currently available.”

Robert Calderwood, Chief Executive of NHS Greater Glasgow and Clyde, said: “The installation of this high resolution scanner will provide the most advanced imaging facilities in the world on the Queen Elizabeth University Hospital campus. 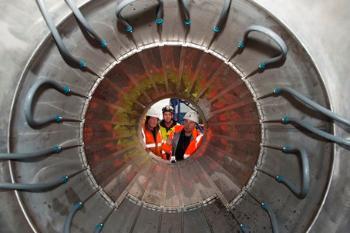 “The new building will also provide four state of the art theatre suites with full ancillary accommodation which will be utilised by the Department of Neurosurgery and Oral Maxillofacial Surgery.”

Councillor Frank McAveety, Chair of the Glasgow City Region Cabinet, said: “I am delighted a further milestone has been reached for the ICE project. The £1.13billion Glasgow City Region City Deal will not only deliver tens of thousands of jobs and enormous infrastructural improvements over the coming decades, but also continue the City Region’s rise as a leader in innovative industries.

“The investment we are making in exciting innovation projects such as the ICE will create new jobs and expertise in the key sectors that will deliver sustainable future economic growth.”

Dr Craig Buckley, Head of Research and Scientific Collaborations - Siemens Healthcare GB&I - ‎Siemens Healthcare, said: “Dementia is now the leading cause of death in England and Wales and conditions such as Parkinson’s, Alzheimer’s disease and epilepsy continue to be key health challenges across the UK. We are working closely with experts and partners such as The University of Glasgow to improve the process of early diagnosis, treatment, supporting research through partnerships and providing innovative technology.

“The 7T MRI scanner allows researchers to see detail in the brain as tiny as a grain of sand. Brain imaging is extremely significant in these conditions as it identifies miniscule alterations in the structure, function and chemistry of the brain, which can improve early patient diagnosis and care throughout the pathway.”

A spokesperson for The Sackler Trust and Dr Mortimer and Theresa Sackler Foundation said: “We are delighted to support the acquisition of the University of Glasgow’s new 7T scanner and its new facilities at the ICE building at the QEUH.

“The foundation is pleased to play a role in the advancement of research and look forward to seeing the impact the scanner will have on furthering medical science in this crucial area.”

Bruce Dickson, Regional Director, BAM Construction said, “In our industry our teams become used to overcoming challenges, but plugging a 17 tonne state of the art MRI scanner into a building nearing completion has to be up there with the best of them.

“Fortunately the way this building was procured using a completely collaborative approach means that we have understood exactly what was required from us by our Client, the University of Glasgow, and their partners NHS Greater Glasgow and Clyde from the very start of the project and our team have been planning for, and working towards, this moment for over a year.

“This is our third major project within the new Queen Elizabeth University Hospital estate and we are delighted to be involved in such a ground breaking, world class facility.”