Professor Pat Monaghan, UofG's Regius Chair of Zoology, has been elected President of the Association for the Study of Animal Behaviour. She told Campus e-News: 'I am honored to be elected President of the ASAB, one of the major academic societies in Europe promoting research, scholarship and education to further our understanding of why animals behave in the way they do, and the environmental challenges they face.'

Recognition for the Scottish Chough Project

Professor Monaghan is also celebrating the shortlisting of one of her projects for the RSPB Nature of Scotland 2016 Species Champion Award. The Scottish Chough Project is a long term collaboration between UofG, Aberdeen University, Scotland's Rural College, and the Scottish Chough Study Group. 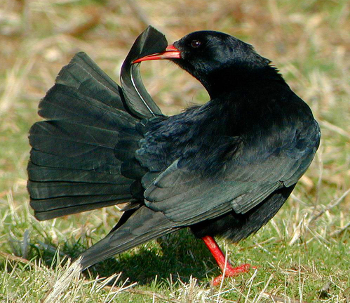 The chough is a charismatic member of the crow family, distinguished by its bright red legs and bill. One of Scotland's rarest birds, it is now confined to the Inner Hebridean islands of Islay and Colonsay but was once much more widespread. The Scottish Chough Project started in the early 1980's to study individually marked birds, and has yielded much insight into the ecology, behaviour and genetics of the species, and the threats to its survival. The Project collaborates with Scottish Natural Heritage, the government body responsible for nature conservation in Scotland, and with key conservation charities such as the Royal Society for the Protection of Birds, to identify the best management policy for chough conservation.

The Nature of Scotland award winners will be announced at a ceremonial dinner in Edinburgh on 24 November, hosted by BBC presenter Chris Packham.