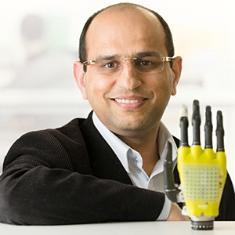 A University of Glasgow researcher whose work could help amputees recover sensation in their artificial limbs has received a prestigious international award.

Dr Ravinder Dahiya, of the University’s School of Engineering, picked up the 2016 IEEE Sensors Council Technical Achievement Award in the area of Sensors (early career) at the IEEE SENSORS Conference in Orlando, Florida on Wednesday November 2.

The award is presented by the Institute of Electrical and Electronics Engineers to honour researchers who have made an outstanding technical contribution to their chosen field, as documented by publications and patents. Dr Dahiya received a commemorative plaque and a cheque for $2,000.

As director of the University’s Electronic Systems Design Centre and leader of the Bendable Electronics and Sensing Technologies Group, Dr Dahiya’s work is focused on developing new forms of electronic ‘skin’ and tactile sensing technologies.

These research innovations have numerous applications, including dramatic improvements in the field of prosthetics. An artificial limb which incorporates artificial skin with sophisticated sensing technology could help amputees recover their sense of touch, for example.

Alternatively, used as a second skin for humans, the sensors could monitor sweat for the early warning signs of diseases such as diabetes.

Dr Dahiya said: “I’m very proud to be receiving this award from the Institute of Electrical and Electronics Engineers. The nominees for this award are chosen by IEEE members, so it’s particularly meaningful to have the recognition and support of my peers.”

The award is the latest in a string of recent accolades for Dr Dahiya, which also include the 2016 International Association of Advanced Materials (IAAMM) Medal, the 2016 Microelectronic Engineering Young Investigator Award, and inclusion in the list of 2016 Scottish 40UNDER40.