Monet and the Impressionists

The School of Culture and Creative Arts' Professor Clare Willsdon, who teaches the history of art, has contributed new research to two major international exhibitions with wide public benefit and impact.

Monet and the Impressionists: Lost in Translation, was organised by the Art Centre Basel with advice from Prof. Willsdon, and opened by the Queen of Denmark at the ARoS Kunstmuseum in Aarhus, Denmark.

Painting the Modern Garden: Monet to Matisse, for which Prof. Willsdon is Curatorial Consultant, is organised by the Cleveland Museum of Arts, Ohio, and the Royal Academy of Arts, London where it is currently on view. 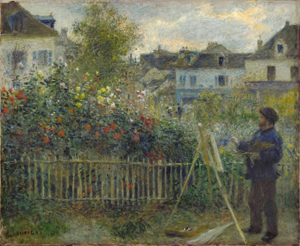 Clare Willsdon has also written key texts for the exhibition catalogues. This work follows her role as Academic Adviser and co-curator of Impressionist Gardens at the National Gallery of Scotland and Museo Thyssen-Bornemisza in Madrid – the best-attended British-originated exhibition worldwide in 2010-11.

Both the new exhibitions have attracted very favourable media attention. Monet and the Impressionists presented an innovative re-appraisal of Impressionism in relation to aspects of 21st-century art. Painting the Modern Garden is the first exhibition on the inspiration of gardens and garden-making for ‘modern’ art, and brings together some 150 works from collections worldwide, including Monet’s Agapanthus panels, reunited for the first time in Europe since the 1950s, and paintings by Henri Matisse, Edvard Munch, and the German Expressionist Emil Nolde.

Clare has also contributed to the audio-guide for Painting the Modern Garden, and the exhibition film which will be screened in British cinemas from 12 April, and internationally from 24 May. She was interviewed for a Guardian podcast and is giving a public lecture at the Royal Academy on 4 April.