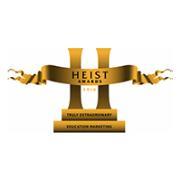 The social media team within Communications and Public Affairs secured a major industry-wide prize at the annual HEIST Awards for excellence in marketing in higher education, unveiled at a gala dinner in Manchester on 7 July.

The University of Glasgow won ‘most effective use of social media’ for the promotion of the discovery of gravitational waves. This comes just weeks after the team won the Chartered Institute for Public Relations Excellence Award 2016 for ‘best use of social media’.

The university was also nominated as a finalist in best undergraduate prospectus, best internal communications for the Full Stop initiative and best low budget campaign for the promotion of the discovery of gravitational waves.

Peter Aitchison, the Director of Communications and Public Affairs said, ‘This was a real collaborative effort by the department but especially recognises the tremendous talent we have within our social media team - now widely regarded as exemplars in the sector. But, of course, we can only do what we do because of the amazing and world leading science that goes on at the University of Glasgow and the incredible achievements of the institute for gravitational research.’