The University will reach a major milestone in the journey to invest in its World Changing Campus at Gilmorehill next month. 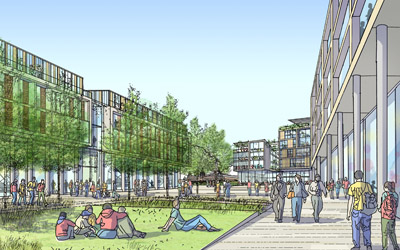 Planning documents have just been lodged with Glasgow City Council giving notice that the University will proceed with its Masterplan for the existing campus and the Western Infirmary site, which the University takes over from the beginning of April. A five day public exhibition will open on Wednesday 17 February in the Wolfson Medical School building.

The University’s plans have been heavily influenced by an extensive consultation process that began in 2012 and has carried on throughout, including public, staff and student forums.  These consultations shaped the Campus Development Framework, approved by the council, and now further consultation and engagement is being planned. A spokesperson for the University said it was essential that the public, staff and students contributed to the consultation process to help influence eventual planning applications. Feedback would also help shape the details of individual buildings.

It’s expected the University will invest up to £1 billion in the campus over the next ten to fifteen years.  New buildings are being planned including a Learning and Teaching Hub, a Research Hub, a new hub building for Health and Social Sciences and new buildings for both the College of Arts and the College of Science and Engineering.

The development of the campus will have a major, beneficial impact on the surrounding areas and the city beyond.  An economic impact assessment just released indicates the University of Glasgow sustains more than £1.5 billion of output in Scotland.

The first ‘Proposal of Application’ notices to be submitted to the city council cover the overall Campus Masterplan and also the Learning and Teaching Hub, which is to be built on the site of the Boyd Orr building car park, bounded by University Avenue and University Gardens. The Masterplan seeks to give a broad and holistic overview of the redevelopment, fully integrating the site of the former Western Infirmary with the existing urban development in Hillhead and Partick, and the parkland and civic buildings of Kelvingrove.

As part of this process, a public exhibition of the proposals is being held in the atrium of the Wolfson Medical School building from Wednesday 17 February until Sunday 21 February.  Staff and students are being urged to get along to this exhibition while it’s open to see what is being proposed and to take the chance to comment and give feedback.

The University is also engaging with the city council itself and the four community councils in our area: Hillhead, Partick, Dowanhill and Woodlands.

The exhibition starting on 17 February will be open from 11.30 am to 7pm on weekdays; 11am to 4pm on the Saturday and 1pm to 4pm on the Sunday.  Staff from Estates and Buildings and other University departments will be on hand throughout together with the University’s partner planning consultants, surveyors, infrastructure experts and architects including Muir Smith Evans, Aecom, HLM Architects and Lambert Smith Hampton.