A former UofG Film Studies student has just been named Graduate Employee of the Year. 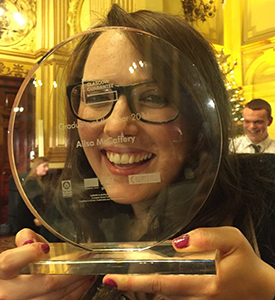 Ailsa McCaffery now works at Enterprise Screen in Glasgow, her first main job since leaving the University of Glasgow.

She has just been named Graduate Employee of the Year for 2016 in the Glasgow Guarantee awards.

The Glasgow Guarantee, launched in September 2015, is the biggest programme of its kind in the UK. A legacy of the Commonwealth Games, the £50 million Glasgow Guarantee programme offers a commitment that all sectors in the city will work together to ensure that young people are assisted into employment and training.

The Guarantee replaces the former Commonwealth Employment Initiatives which assisted over 6,000 Glaswegians to progress into employment, apprenticeships or training through a number of initiatives during the period 2009 to 2014.