Think Tank of the Year 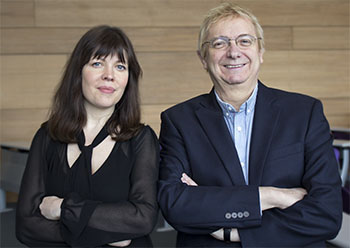 As well as the main award, the collaboration between GUMG and Chatham House’s Energy, Environment and Resources Department (EER) also picked up the ‘UK Energy and Environment’ award. This recognised their joint work including the report Changing Climate, Changing Diets: Pathways to Lower Meat Consumption.

Professor Philo told Campus e-News: "We were delighted that our pioneering work in this area should be recognised with this award. For the first time, our researchers in the Media Group were able to develop qualitative research on beliefs and behavioural change around the world, providing really important results in the area of Climate Change."

There are billions of chickens, pigs and cattle on the planet, all bred for our tables, and the livestock sector produces more greenhouse gasses than all forms of transport combined. The report states that reducing our meat consumption “would generate over a quarter of the emission reductions needed by 2050 … However, governments are trapped in a cycle of inertia: they fear the repercussions of intervention, while low public awareness means they feel no pressure to intervene.”

The Glasgow researchers, together with Ipsos Mori, conducted interviews and focus groups in China, Brazil, the USA and the UK, finding that people everywhere are prepared for radical change in their consumption of meat, as long as governments give a clear lead.

Dr Happer says: “When the importance of meat production on emissions is communicated to the public, there is an expectation that action will be taken – and that it will be led by governments … Even unpopular interventions to make meat more expensive, for example through a carbon tax, would face diminishing resistance as people come to understand the arguments.”

On its release in November 2015 the report received a huge amount of media coverage, effectively generating debate and raising awareness of the issue. The report has been downloaded from the Chatham House website more than 6,000 times, including by government departments and corporate players. It was also presented at the UN Climate Change Conference in Paris in December 2015, at which an historic global deal was made.

GUMG are continuing to build on this foundation to shift the agenda on climate mitigation to include consideration of sustainable diets. The researchers have made it a priority to inform policy making and have given presentations of their work at the Scottish Parliament and to the Science and Technology Committee at Westminster.

The Think Tank Awards ceremony took place at the Houses of Parliament last week, with Chatham House Director Dr Robin Niblett accepting the awards on behalf of the researchers.

Update: On Sat 7 Jan 2017, Dr Catherine Happer featured on an episode of 'The Inquiry' on BBC World Service. Listen here: Can We Eat Our Way Out Of Climate Change?